The ‘Altcoin rally’ did not precede Bitcoin this time as the king coin set up the bullish precedent. However, while a majority of the market’s altcoins were picking up the pace slowly, Chainlink registered a 13% rally off the bat. LINK was valued at $12.06 at press time, and speculations were starting to arise about whether LINK can take advantage of this present rally, just like in July 2020. 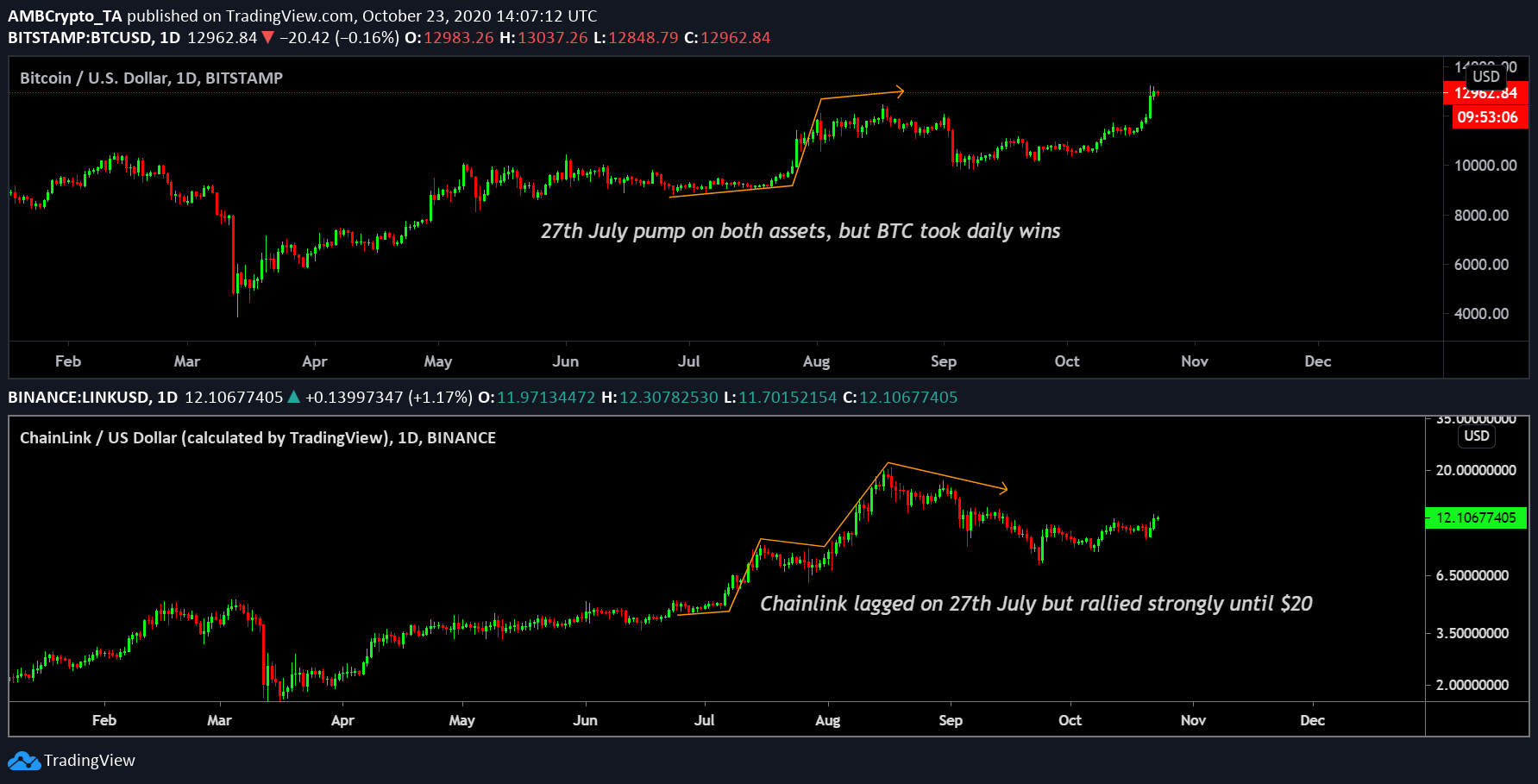 As highlighted by the attached chart, Bitcoin and Chainlink both commenced on a bullish path on 27th July. While Bitcoin took the accolades on the 27th with its daily highs, LINK sustained its momentum for a longer period, eventually registering an all-time high of $20. Since then, while the crypto-asset has depreciated by approx. 60% from the top, it isn’t down and out like other major assets.

Will LINK outperform Bitcoin on the charts again?

Now, according to Santiment’s latest analysis, Chainlink’s recent jump in terms of value came on the back of high accumulation, with its top-10 non-exchange wallets hitting a new high since 1 July 2019. While whale traders led the rally back in August 2020 as well, its implications cannot be ignored.

However, a particular metric has remained consistent across the last couple of rallies.

Bitcoin and Chainlink continued to note a strong level of non-correlation which is non-existent for BTC with the other altcoins. Since July, LINK’s correlation with Bitcoin has fallen to a new low of 0.475. In fact, the 2nd closest low correlation was noted between Bitcoin and TRON at 0.533.

Such a low correlation with Bitcoin means that a similar situation might surface yet again for Chainlink. Right now, the crypto-asset might have been better off with a higher correlation to BTC, but an independent rally like August 2020 would allow LINK to bridge a bigger gap to its all-time high of $20.

“Historical representation is not an accurate projection of the future?”

While LINK’s market currently has a degree of enthusiasm, it will be difficult to steal Bitcoin’s thunder during this rally. It is important to note that Chainlink recently launched a verifiable randomness function or VRF on the Ethereum mainnet. And, while its ecosystem is noting more technological developments, it might not be enough at the moment.

Chainlink will potentially re-test $20 in the next few months, but not at the expense of Bitcoin’s current purple patch.