Home » Bitcoin » A shockwave incoming for Bitcoin HODLers…. what to expect?

Bitcoin has been pulled out of cryptocurrency exchanges since the start of 2020, while its price has surged by 32% year to date. At first, it may seem counterintuitive that Bitcoin is being pulled out of exchanges while there is an uptrend in prices, especially since while the price has risen by 63% since 2019, HODLers are noting 82% in unrealized profits too.

However, over the past week, there has also been an increase in the number of Bitcoin wallets with 100% unrealized gains.

In fact, based on data from Chainalysis, the same noted its biggest one-week increase in over two months, rising by 239.82k BTC to climb to 6.82M BTC. Though a few DeFi projects have outperformed Bitcoin in terms of ROI in the short-term, HODLers haven’t moved their Bitcoin to exchange wallets yet as reserves on exchanges have continued to plummet. 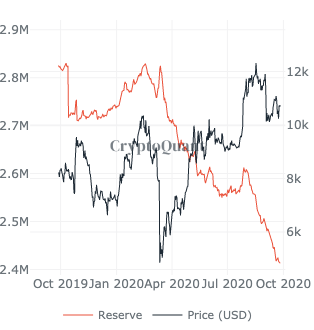 Interestingly, exchange reserves have continued to plummet since October 2019, with the same dropping below $2.5M in September 2020. While during the Bitcoin rally of July 2020, the reserves did cross $2.6M, the figures for the same soon dropped again on the charts. Bitcoin, here, is leaving exchanges, in transit, and then hitting wallets or mining pools.

Consider this – As of 25 September, $9.82M was in transit, with some percentage of Bitcoin moving from mining pools to exchanges. While buyers on exchanges haven’t generated new demand in 3 months, there have been consistent withdrawals at the same level as of October 2019, and this has drained exchanges of their Bitcoin supply.

While the outflow has remained the same for the past 6 months, it has increased three-fold when compared to October 2019. This situation may warrant a drop in price in the coming weeks, if the supply to exchanges remains choked while whales accumulate.

In fact, based on data from Whalemap, it can be observed that unspent Bitcoins have been accumulated by whales in the $10.4-$12.3k range. That may explain the recent accumulation from $4k to $8.5k and the fact that whales who bought at this price have unrealized gains ranging from 20-60%.

Over the past month, Bitcoin shorts have fuelled longs on BitMEX and this trend may reverse itself if there was an increased supply of Bitcoin to exchanges. HODLers who haven’t booked their unrealized profits may then see it plummet, as the supply increases and whales book profits.

A shockwave may be coming for Bitcoin HODLers, and they should watch out.