A political earthquake greets the continent this morning as the Five Star Movement (M5S) gained by far the most votes at 32%, more than the next two parties combined.

They now stand at the brink of power. A fact which by itself opens a new chapter of politics, at least in Italy, for this is no ordinary party.

To describe them in one sentence, we’d say they are the Occupy Movement and the Tea Party, managing to do what neither could. Rising through the political system to now have a shot at ruling Europe’s third biggest economy.

Whether they will be given the office remains to be seen as coalition negotiations are underway, but any trust in the political system would shatter if the party with most votes by far does not get to rule: 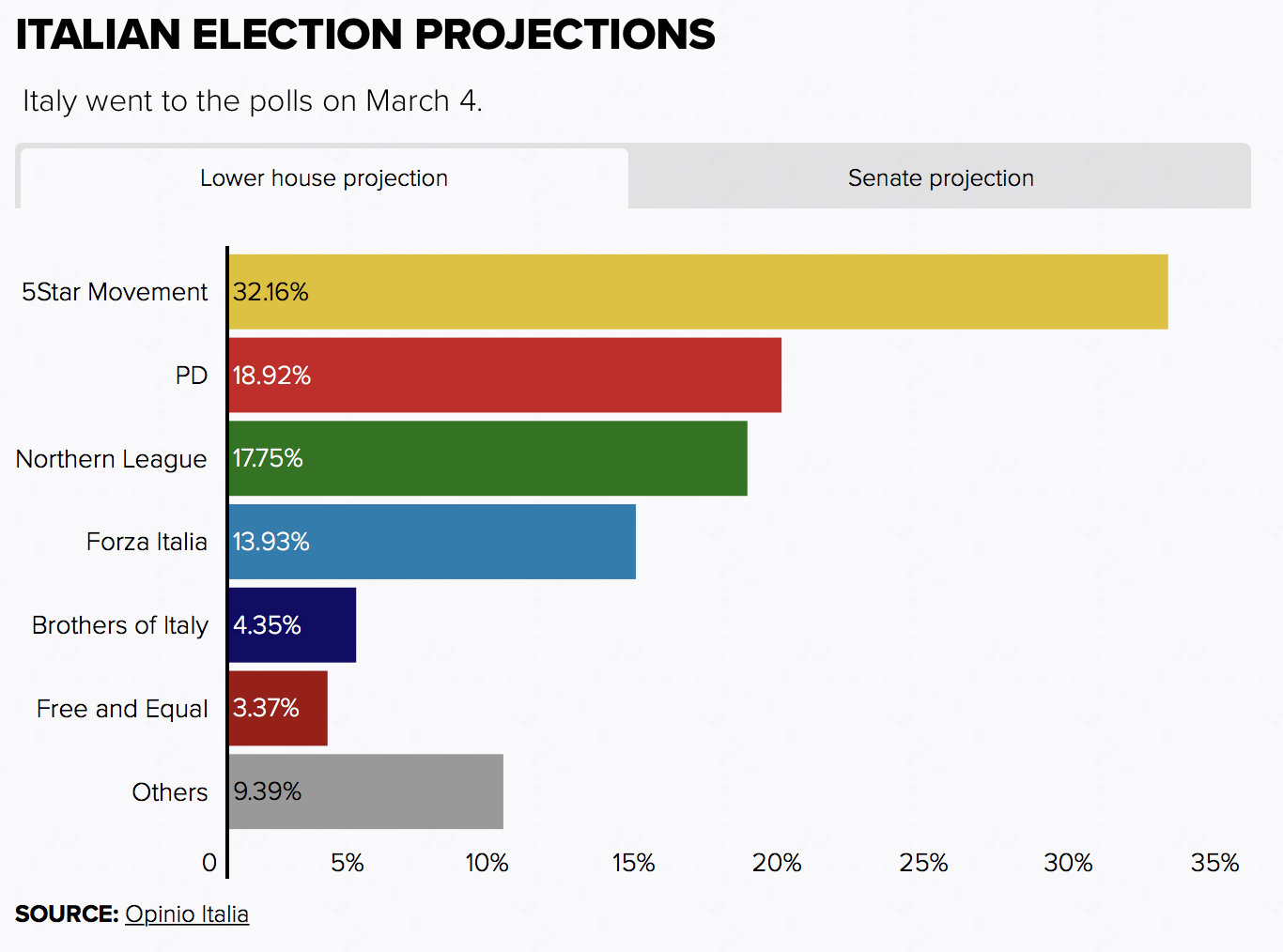 They can easily form a coalition with either party to gain the 40% majority, or rule as a minority government. But they have ruled out a coalition, and to understand why we have to understand the movement.

This all started a decade ago when an Italian comedian, Beppe Grillo, used his influential blog to organize meet-ups through the internet, giving rise to a movement that believes:

“We live in a ‘post-ideological phase,’ an age in which the failure and inadequacy of 20th century ideology has become evident to the people, who are disenchanted by concepts like socialism, communism, fascism, capitalism, and even ‘left’ and ‘right’.”

They want direct democracy, with their current leader, Luigi Di Maio, voted through online ballot boxes. A geek, some call the 31 year old Di Maio, who started his youth first as an engineering graduate, then jurisprudence, then a webmaster.

Look at Estonia, Grillo said. They move at a speed of one thousand miles an hour. The university here doesn’t even know what we’re talking about, he says, and yet the biggest opportunity since the scripture has arrived: the blockchain.

The party recently dropped a pledge to hold a referendum on the euro during the election, but they don’t really like the euro and have mulled proposals to issue ICO tokens of their own either for a local economy such as a city or for certain fiscal functions.

“Many of these speak with technical language, others driven only by profound intolerance towards the world banking system,” says an Italian cryptomedia under the title “The secret weapon of the M5S: Bitcoin.”

They can therefore be seen as an internet party and a grassroots movement with anti-elitists and anti-establishment tendencies, riling against crony capitalism, lobbyist revolving doors, career politicians, and against out of nothing fiat.

There are these new concepts, these incredible new concepts, Grillo says. Bitcoin, is not a bank, there is no bank that mints money. It’s a finite money, with a public algorithm, therefore it’s democratic, he concluded.

Now, they are on the verge of power, with Italy potentially becoming the most crypto friendly nation as that ancient Rome seemingly embarks on a very 21st century experiment.

An experiment that might cause quite some headache in Berlin and Paris where they are embarking on a complete integration of the banking system to keep the Euro, which fell today upon the announcement of the results:

In contrast, most cryptos are up today as uncertainty grips Europe and Italy following the election results.

Who will rule remains unclear as neither party has been given a majority, but the Eurosceptic M5S and the North League have gained more than 50% of the votes.

The euro monetary union, therefore, might be in question in Italy, a sufficiently big and rich country that can’t be ordered around like Greece.

Yet the euro element might perhaps be the least interesting part of this movement because the technocratic M5S is the first of its kind to be so close to power, perhaps in the entire history of civilization.

How their ideas will translate in government, if they ever get there, will thus closely be watched as a new political system, a new way of organizing, and a new experiment, is seemingly underway in that ancient land which once ruled the world.