Say hello to the Flowing Hair Dollar. Modeled after the Spanish Dollar, it was the first dollar 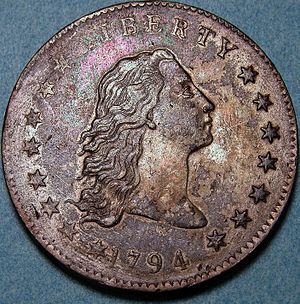 The coin’s inception dates back to 1791 when then US Secretary of Treasury, Alexander Hamilton, called for the production of a national coin. Answering this call, Congress passed the Coinage Act of 1792,� authorizing the nation’s first silver and gold backed mints. �

Production began two years later, and in 1794, the Flowing Hair Dollar was born.  Its production life was short lived, though, and it was replaced by the Draped Bust Dollar in October 1795.  Ironically, the Flowing Hair Dollar actually benefited from its shortened lifespan.  It led to a scarcity that has given it an astronomical valuation, as many believe the 130 or so dollars left in circulation to be the most valuable coins in United States history.

The first ever minted Flowing Hair Dollar, for instance, sold for $10,016,875 in an auction five years ago.  That selling price makes the first issue coin the most expensive mint in human history.

Until recently, that is.

Out With the Old, In With the New 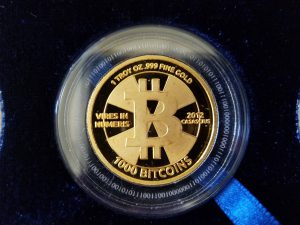 A new coin has usurped the Flowing Hair Dollar’s gilded throne.  When Bitcoin broke well over $10,000, the Casascius 1000 BTC gold coin became worth more than its weight in gold.  At the time of writing, one of these coins is worth a hefty $10,622,000.  So long as Bitcoin maintains a price above $10,017, Casascius’ 1000 BTC will retain its title as the most valuable physical coin in the world

Casascius, the pen name of Bitcoin user Mike Caldwell, began minting physical Bitcoins in 2011.  Each coin came backed by brass, silver, or gold and included the digital Bitcoin(s)’s private key imprinted on the coin’s reverse side.  His production included an original and second series 1 BTC coin, a 10 BTC silver round, a 25 BTC coin, a 100 BTC gold plated bar, a 1000 BTC gold plated bar, and the crown jewel, the 1000 BTC troy oz. gold coin. Unfortunately, Casascius ceased production in 2013 after the United States Financial Crimes Enforcement Network demanded that he federally register his business.

But that didn’t stop him from minting five 1000 BTC coins before he had to close shop. This scarcity has made them a collector’s item, but the price of Bitcoin as a cryptocurrency is what’s really driving the value of this coin. �

Back in March 2015, you could reasonably buy one for $300,000, but as Bitcoin continues to climb up the five figure price range, a “reasonable” price of $15,000,000 or even $20,000,000 may be more realistic in the near future.  The troy ounce of gold that comprises the coin makes it a pretty sight, but it’s crypto’s king that makes this asset a pocket-sized goldmine.  And if Bitcoin continues to rise, the mine won’t dry up anytime soon.