PayPal wants to speed up your bitcoin transaction processing times and has filed a patent for a faster cryptocurrency payment system, according to an application with the U.S. Patent and Trademark Office.

In the dawn of the internet age, it wasn’t yet obvious what potential the new “world wide web” held. The ability to connect and chat with others, explore their content, and access news from far corners of the globe was novel enough to distract most, but those with vision understood that the internet could be so much more. One group of people banded together in 1998 under the name Confinity, and later as PayPal (after being joined by Elon Musk), and the rest is history. Since its IPO in 2002, PayPal has helped the internet become a tool for commerce as well as content, and it still dominates the online payment scene to this very day.

Despite PayPal’s rampant and continual success, with yearly revenues on a steady upwards trajectory from just over $3 billion in 2010 to $13 billion in 2017, the company’s foresight has warned them of troubles on the horizon. In the last few years, cryptocurrency payment solutions built with blockchain have slowly proliferated. Universally, these decentralized platforms demonstrate that PayPal, if it keeps its current business model will likely face stiff competition and begin to lose its foothold.

This is a function of PayPal’s convoluted fee structure, in which customers and merchants alike must tolerate 5% charges per transaction for the privilege of using the platform, among other arbitrary rules designed to keep the company solvent.

To preempt the inevitable rise of cryptocurrency payment solutions rivaling its own, PayPal filed a mysterious patent application for an “expedited virtual currency transaction system” on March 1, 2018. 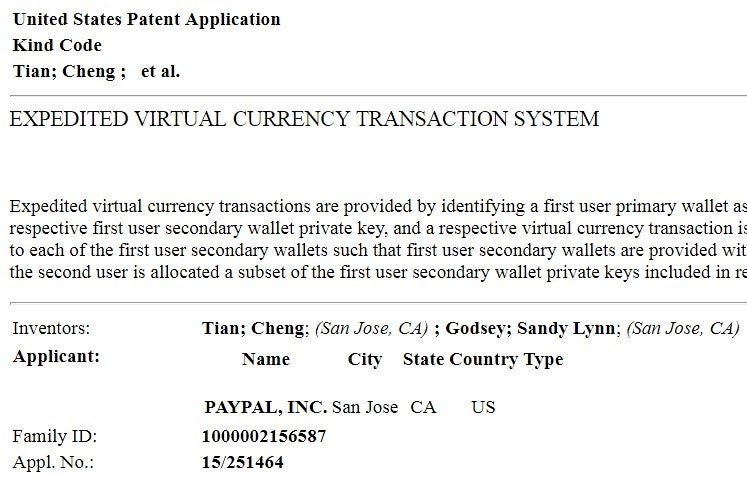 Decentralized cryptocurrencies accomplish the ultimate ambition of PayPal: to transact quickly and inexpensively across borders. While PayPal must rely on partnering financial institutions and payment processors to provide their service, which add costs and precious time to transactions (and still bar their entrance into some markets), distributed networks like that of bitcoin are starting to look like a better alternative, even despite their flaws.

What is PayPal’s Game?

Not one to sit by idly while new solutions degrade its own value proposition, PayPal’s new patent gives cryptocurrency enthusiasts a clue about its intentions. An “expedited virtual currency transaction system” hints at a cryptocurrency-based payment system that doesn’t suffer from the same transactional hiccups as bitcoin, for example.

Bitcoin’s decentralized infrastructure sacrifices speed and cost, relative to its potential, for increased democracy and rejection of the traditional centralized business model. However, PayPal has little incentive to abide by the cryptocurrency industry’s central tenet of decentralization. Quotes gathered within the last few weeks also indicate that PayPal executives are wary of the advance of cryptocurrencies.

PayPal CEO Dan Schulman recently spoke about the opportunities and obstacles facing cryptocurrency solutions in the current climate. Schulman touched on the level of volatility and inconsistent regulations in the young space, saying, “Regulations need to be sorted out along with a whole number of other things. It’s an experiment right now that is very unclear as to the direction it will go in.” While this might seem somewhat contradictory, given that his company had filed a cryptocurrency-related patent just days’ prior, the timing is nothing less than perfect.

Another idea can be taken from statements made last month by PayPal CFO John Rainey, who discussed the risk that companies accepting bitcoin must suffer.

“Given the volatility of bitcoin right now, it’s not a reliable currency for transactions because if you’re a merchant and you have a 10% profit margin, and you accept bitcoin, and the very next day bitcoin drops 15%, you are now underwater on that transaction,” said Rainey, who indicated that it would likely be “years down the road,” before bitcoin becomes ubiquitous.

While this is true, it fails to account for other cryptocurrency solutions that have already eclipsed bitcoin’s capabilities. COTI, for example, enables up to 10,000 transactions per second and costs virtually nothing to use. With cheaper and faster transactions, COTI also incorporates a special blockchain called Trustchain into the mix.

Systems like this target PayPal directly by focusing on the company’s inabilities. For one, this focus on adding trust and reducing costs means that companies have a more transparent system to handle payments. Additionally, placing these new platforms on blockchain removes the transactional and cross-border difficulties PayPal faces.

Reading Between the Lines

Given their recent quotes, the two most senior positions at PayPal are cognizant of ongoing regulation efforts, bitcoin’s innate flaws, and their own platform’s weakness versus cryptocurrency alternatives. The comments made by Schulman and Rainey within the last month are true, but that doesn’t mean they contrast with plans for their patent. There are several ways that PayPal could use cryptocurrency technology while both ignoring bitcoin and staying abreast of ongoing regulatory efforts.

On the other side of the table, merchants who want payment in fiat would be able to accept cryptocurrency payments quickly and inexpensively, and enjoy the same back-end exchange. (See also: Twitter Billionaire Jack Dorsey Invests in Bitcoin Lightning Network.)

Another more probable alternative is that PayPal will create its own centralized cryptocurrency, much like Ripple has done. The authority and control attainable with centralized cryptocurrencies, which grant one entity responsibility for the network over a group of peers, are more relevant to PayPal’s needs. This way, PayPal can regulate how many coins are minted, reduce volatility, and provide merchants a way to improve their bottom lines simultaneously.

Either way, PayPal will finally be able to escape the clutches of its peripheral service providers, reach across borders where it’s currently not active, and provide clients with a cheaper, faster way to merge their physical and digital finances. However, it has stiff competition and will need to act fast because it’s already far behind the curve. (See also: Passwords Are Obsolete, Get With the Blockchain.)

PayPal’s ultimate weakness is that its grip on the market is threatened by the services that enable it to be so convenient. Subject to the fees of partnering banks, payment processors, and other services that add to its overhead, few can justify PayPal’s ease of use with its costs. They simply have no other option—and neither does PayPal. Many merchants and users end up paying between 3% and 5% per transaction, and will continue to do so until PayPal finds a way to meet the expectations it’s set for the payments sector while also reducing its own expenses.

Though investors will jump at the chance to contribute bitcoin or Ethereum to a PayPal ICO, such an event is unlikely to occur. Instead, the payment giant will likely bootstrap their own proprietary solution, creating even bigger waves in the cryptocurrency industry. Their shadow looms large, and when PayPal finally jumps in, the splash might be big enough to sink many promising decentralized solutions, thus disrupting the disruptors. (See also: Bitcoin’s Lightning Network: 3 Possible Problems.)

Investing in cryptocurrencies and Initial Coin Offerings (“ICOs”) is highly risky and speculative, and this article is not a recommendation by Investopedia or the writer to invest in cryptocurrencies or ICOs. Since each individual’s situation is unique, a qualified professional should always be consulted before making any financial decisions. Investopedia makes no representations or warranties as to the accuracy or timeliness of the information contained herein. As of the date this article was written, the author owns cryptocurrencies.