Brad Garlinghouse, CEO of Ripple — a US-based payment network and protocol company — spoke with Cointelegraph at the Blockchain Connect conference in San Francisco earlier this year about what problems Ripple can solve in the global marketplace, and the company’s approach to government regulation and traditional finance.

Garlinghouse, a Harvard Business School graduate, previously worked at various positions at Yahoo!, including Senior Vice President, and AOL, where he was President of Consumer Applications. Garlinghouse has also served on the board of Ancestry.com, Tonic Health, and Animoto.

Ripple, whose native currency is XRP, has partnered with over 100 companies and financial institutions to send money worldwide using Ripple’s Blockchain-based technology.

Ripple’s price began a skyrocketing uptrend in mid-December 2017, peaking at almost $4 per coin on Jan. 4, according to data from CoinMarketCap. Ripple’s December rise can be attributed in part to their multiple partnerships with traditional finance companies, as mentioned above.

In addition, the South Korean crypto market played an important role in bringing XRP’s market capitalization past $100 bln in early January, the first altcoin to reach such numbers.

When CoinMarketCap took major South Korean exchanges off its listings in early January 2018, XRP saw a drop of more than $20 bln in market cap. 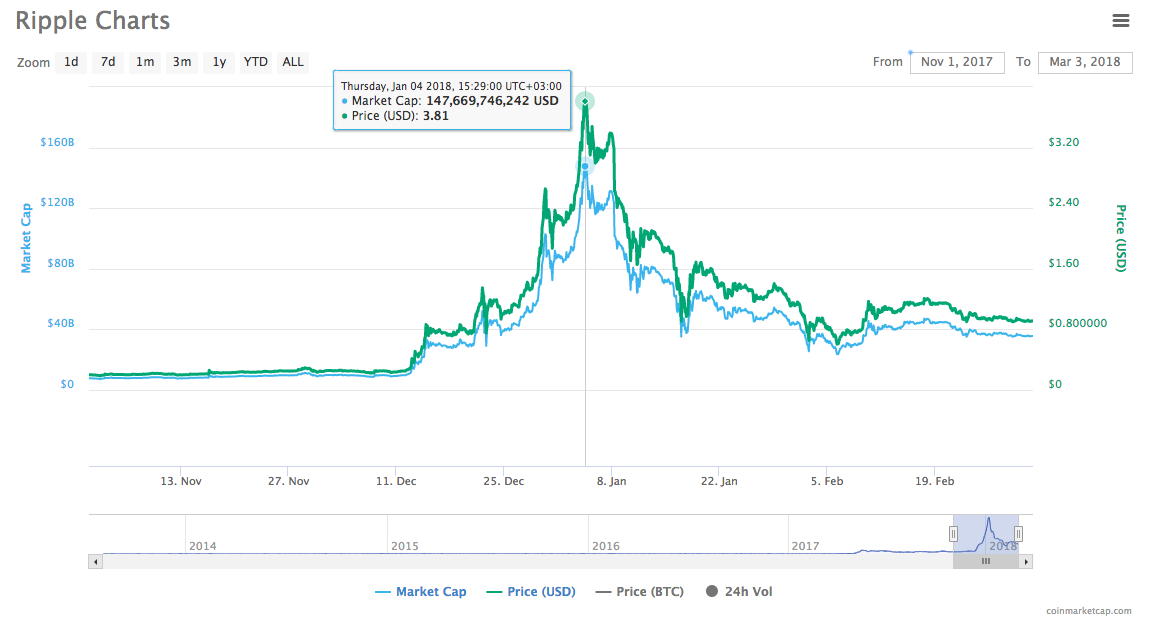 Since the start of 2018, Ripple has announced several new partnerships with financial institutions around the world. On Feb. 7, Ripple reported a new partnership with China-based payment services provider Lian-Lian, and a week later, Ripple made public a new relationship with the Saudi Arabian Monetary Authority to pilot cross-border payment programs to banks.

On Feb. 14, Western Union confirmed that it is beginning testing of Ripple’s Blockchain-based settlement system for transactions.

With a market cap of $37 bln, Ripple is currently the second largest altcoin on CoinMarketCap, trading at an average of just under $1 to press time, down 4.67 percent on the day.

CT: Taking into consideration Ripple’s large uptick in January, its subsequent dip, and the stream of partnership announcements, what are the factors you think are the most influential in Ripple’s meteoric rise over the past couple of months?

BRAD: The first thing I’ll say is I think it’s very hard to know exactly what drives any specific market. I think at Ripple we have continually tried to focus on solving a real problem for real customers. I think there’s obviously a lot of hype in the Blockchain space broadly and I think at the end of the day, from a long-term point of view, the value of any digital asset will be determined by its utility.

If you aren’t solving a real problem for real customers, you’re not going to drive velocity and activity in that digital asset.

For Ripple, that global liquidity problem is measured in the trillions of dollars, I think that people are realizing that Ripple is gaining traction, we’re gaining engagement, we’re gaining more customers. So there’s been interest in that.

Ripple In The US Regulatory Landscape

2017 has been a big year for regulation globally — ranging from crypto bans in China to crypto-friendly regulation in Japan — but the US has yet to come up with a solid regulatory framework for cryptocurrencies, Blockchain technologies, and ICOs in particular.

In December of last year, the Federal Reserve chair Janet Yellen reiterated the Fed’s 2014 position that they have no authority to regulate cryptocurrencies, explaining that the Fed does not differentiate between crypto and fiat currencies when supervising banks to make sure they are complying with US law.

of Initial Coin Offerings (ICO) in 2017, the SEC and the US Commodity Futures Trading Commission (CFTC) held a joint hearing on cryptocurrencies on Feb. 6 of this year.  In the hearing the regulators decided to work together to provide

regulation for cryptocurrencies, encourage Blockchain development, and be more attentive to Initial Coin Offerings (ICO), to make sure they comply with US securities law.

Recently, on Feb. 16, the SEC suspended trading in three crypto-related companies for investor protection purposes. On Feb. 28, media reported that the SEC had undertaken a probe into 80 cryptocurrency-related companies, including Overstock.com and a crypto fund created by TechCrunch’s founder.

In February 2018, US states Arizona, Wyoming, and Georgia all introduced crypto-centered bills related to taxation and securities law.

CT: As Ripple is based in the US, what is your approach to dealing with regulation both within the country and internationally?

One thing that is interesting for me at Ripple is that in some ways people viewed Ripple as the contrarian. We were from the beginning really looking at how we work with governments, how we work with banks. And I think some in the crypto community have been very much,

How do we destroy the government. How do we circumvent banks?

I think that has differentiated us and I think ultimately governments aren’t going away. In my lifetime, I don’t think that’s happening.

I am proud to be able to call the Bank of England a paid customer of Ripple’s. We believe absolutely there should be thoughtful regulation in crypto, in Blockchain.

When we engage with customers, we are not changing the existing regulatory framework, meaning if, for example, the Bank of X has an account, you have to KYC – know your customer – you have to do the KYC check. If the Bank of X is using Ripple’s technology, you’re still doing your KYC check, you’re still doing your AML [anti-money laundering] check, you still need OFAC compliance, etc.

When we talk to regulators, we explain how what Ripple is doing is not circumventing their regulatory frameworks, and they get very comfortable very quickly like,

Oh! I get it. Ok, we get it. If it’s a better product at lower price, we’re happy about that.

CT: Thank you so much, we really appreciate it.

This interview was conducted in collaboration with Cointelegraph news editor, Olivia Capozzalo.