Home » Bitcoin » Why Bitcoin might beat Apple/Google this bull cycle

The market cap of Bitcoin was $210 billion, at the time of writing. Would it be a long shot to say that Bitcoin will overtake Google [$1 trillion] and perhaps, even Apple [$2 trillion], in terms of market cap very soon? Well, probably not.

A few years ago, the same idea would have seemed completely implausible and even, unfathomable, because Bitcoin then was nothing more than a speculative asset with excessive volatility. However, between then and now, a lot of things have changed, developments have normalized Bitcoin’s future market cap at $1 trillion.

The next point has little more oomph to it – It is the full-scale entry of institutions into Bitcoin. However, before diving into this point, we need to take a look at the technical side of Bitcoin that points to a $1 trillion market cap.

It is clear that Bitcoin cycles have been lengthening since its launch in 2009. The first cycle [bull+bear run] lasted 400 days, the second for 1150 days, and the third is still ongoing. 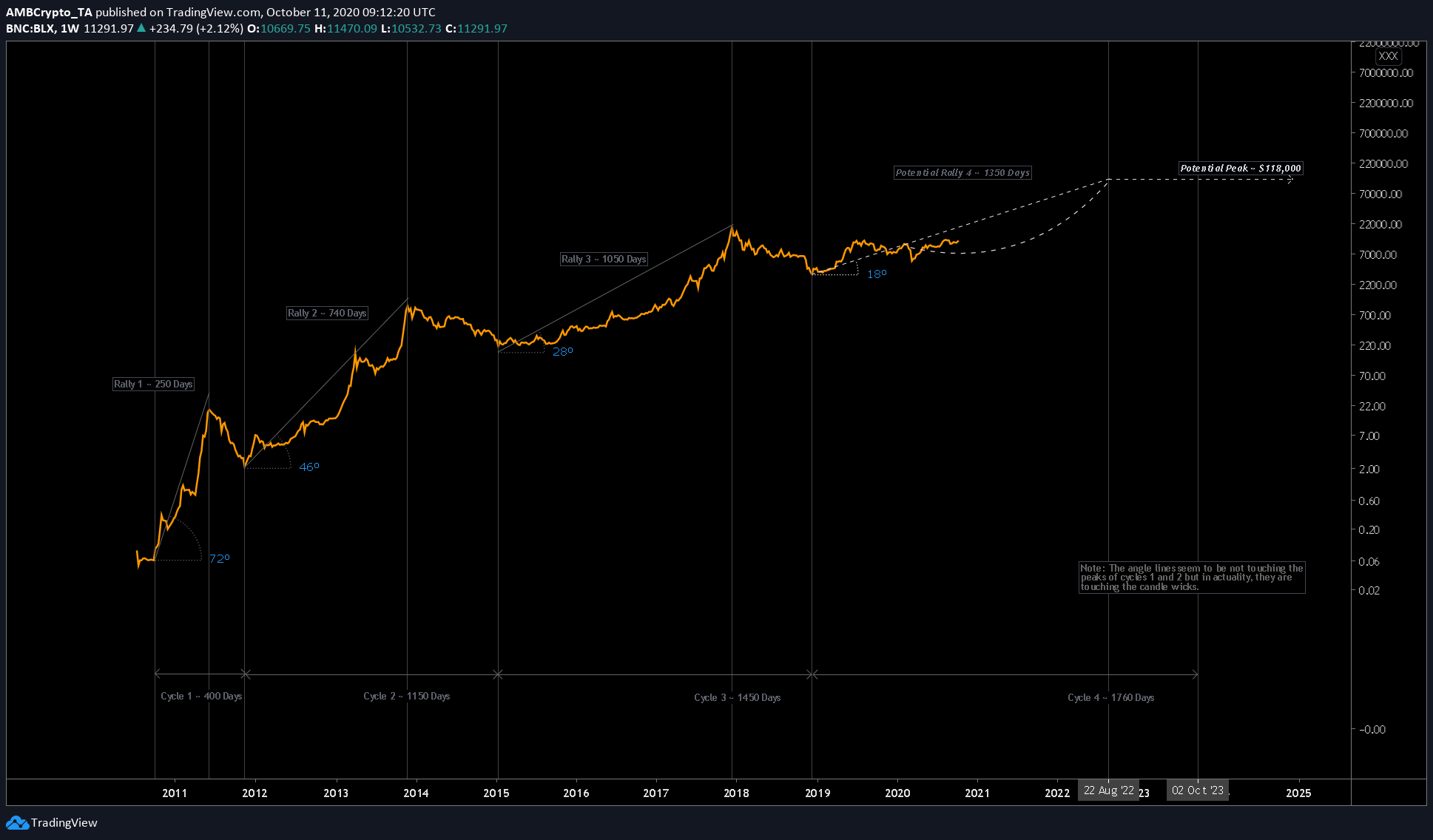 So, in total, we have about 3 separate incidents that predict Bitcoin hitting a market cap of $1 trillion soon and this is excluding the institutional perspective.

For a long time now, Bitcoiners have waited for institutions to fall into the Bitcoin rabbit hole. The infrastructures required are a work-in-progress, however, the first large-scale institution/player that publically announced [in 2020] a Bitcoin investment was Paul Tudor Jones.

Perhaps, the boldest move was MicroStrategy’s scale investment into Bitcoin. MS’s investment announced to the world that Bitcoin can be used to hedge against worsening economical conditions. MS created a portal/path for other companies/institutions to follow.

In fact, Michael Saylor even predicted Twitter CashApp’s investment in a podcast, with Saylor saying,

“.. there are 35,000 publicly-traded companies carrying a total of $5 trillion in spare cash getting negative real returns due to the pandemic. Twitter’s CashApp alone has about $10 billion in spare cash just lying around. So, even if 1%-2% of this capital [$5 trillion] flows into Bitcoin, this would easily push its market cap to $2 trillion and beyond.”

CashApp followed MS and invested $50 million in Bitcoin, This news of this acquisition caused Bitcoin to spike by 4%.

Coming back to Saylor’s comments, there’s about $5 trillion in spare cash sitting in corporate treasuries. If other companies follow CashApp and MicroStrategy’s footsteps, there is a high chance Bitcoin’s market cap will definitely surge and $1 trillion would be an easy mark to achieve.

Although the figure $100k has been thrown around a lot, now that institutions are actively investing in Bitcoin, this number makes sense. 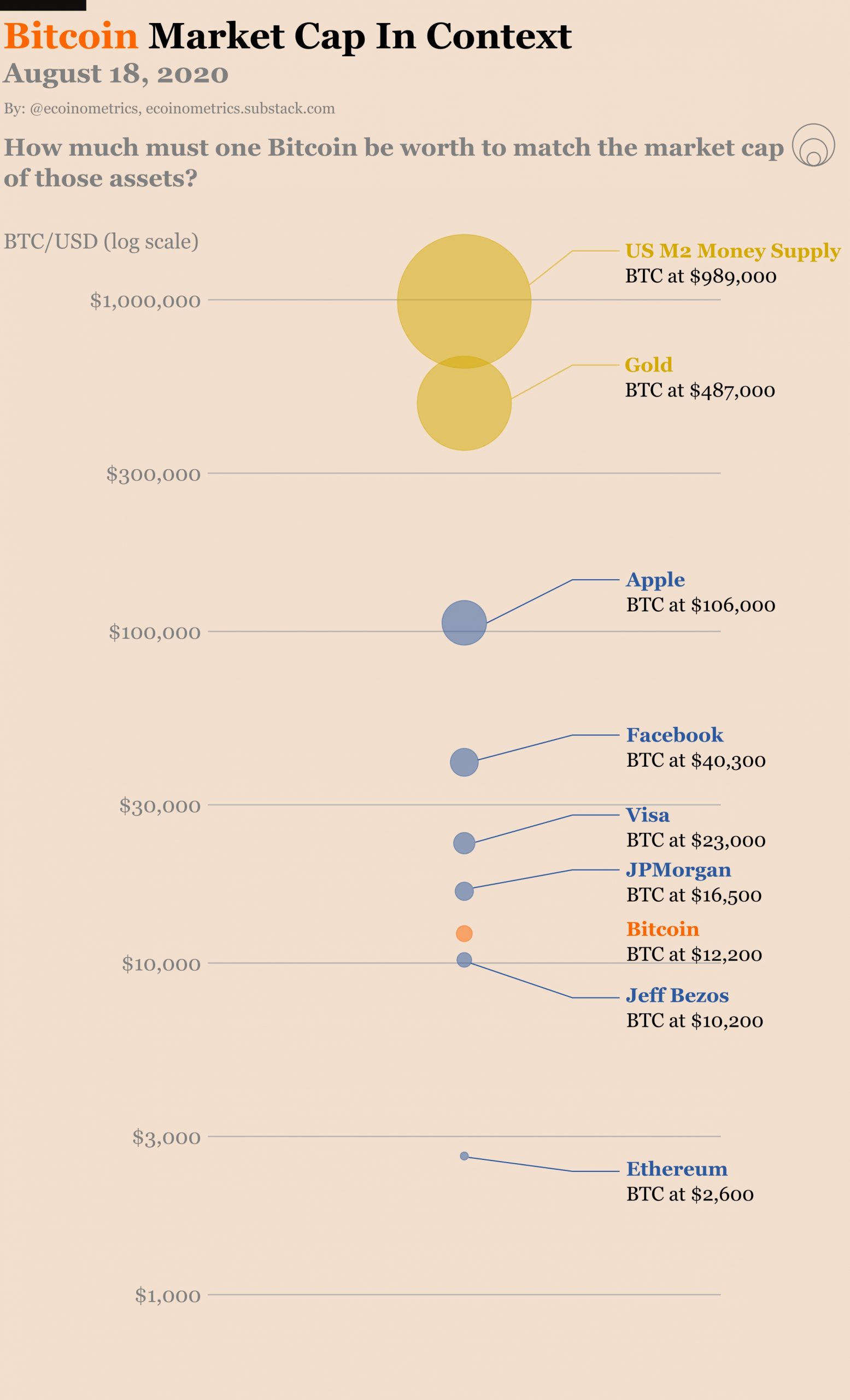 As was hypothesized by a recent Ecoinometrics’ post, Bitcoin’s market cap will likely be b/w Google and Apple’s.