Home » Business » A 'mom concierge' for elite families shares what her job is like, from outfitting private hospital rooms with Egyptian cotton sheets to attending invitation-only pregnancy classes 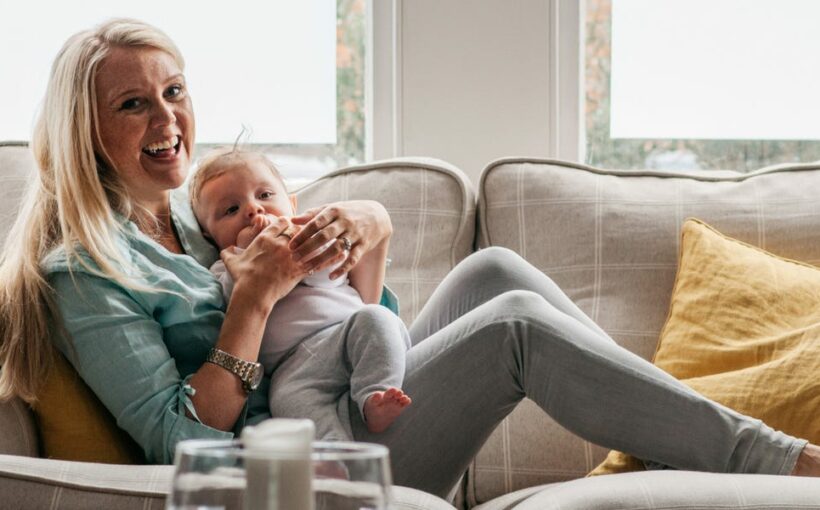 Tiffany Norris, 39, is the “Mummy Concierge.” The London-based pregnancy and birthing guru started her career as a women’s magazine journalist before becoming an event planner. She segued into her one-woman startup focusing on elite mothers five years ago while pregnant with her first child.

“I describe myself as a PA for parenthood,” she told Insider. “The ideal client for me is someone who comes to me the second that line on the pregnancy test turns blue right up until they have toddlers.”

Her hourly rate is between £120 and £300 ($166 to $416), depending on the role she’s playing. How many hours she works per client can vary wildly, from simply a few hours’ counsel to in-person, onsite supervision. She has no set number of clients to which she caters at any one time. “It would only be the sense that I can’t give 100% to all my clients that I would refuse to take on any more,” she said.

Norris lives in London with her husband, who works in finance, and their two children, Rupert, who is three and a half, and 18-month-old Ophelia — she’s expecting her third baby, another daughter, later this year.

Norris is also the author of the forthcoming book, “Secrets of the Mummy Concierge,” which will be out in June.

The UK is currently under a COVID 19-related lockdown, which has turned many of Norris’ activities virtual: Non-essential shopping trips, now outlawed under current British regulations, have become Zoom-based group chats.

She shared how a typical day might have unfolded before the pandemic.

With globe-trotting clientele, her day could start long before breakfast time. 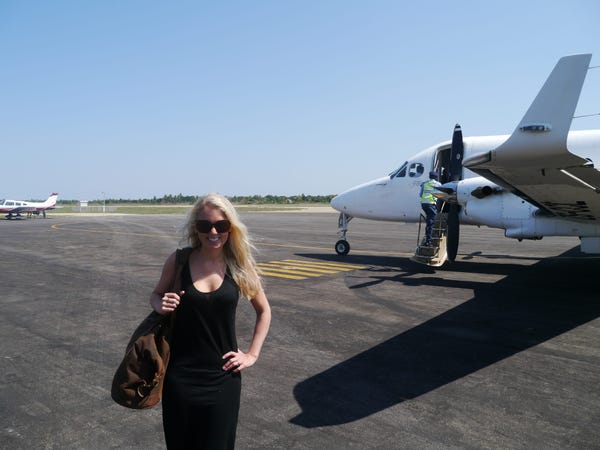 As a mother with two toddlers of her own, Norris said she’d be up early anyway. However, her globe-spanning clientele means she’s often needed to answer emails or take calls before dawn.

“The service I offer means that I have to be available 24/7 — there are numerous nights of the week when I’m on the phone at 3 a.m. to someone in LA,” Norris said. “That’s part and parcel of the job. Wealthier parents are used to getting what they want at the click of their fingers, and that is the service I provide.”

Case in point: the morning she woke up to an email from a mother who was planning to leave for her luxury villa in Dubai, newborn in tow, and wanted Norris to fly out in advance and prep the home for their arrival — oh, and she had 48 hours to do it.

Each morning, she'll often go shopping with clients — with a little extra help. 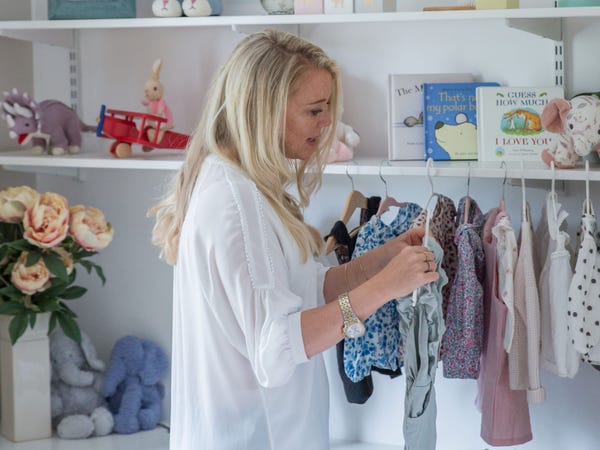 If she isn’t packing for the airport, Norris might be summoned for a shopping trip with an expectant mom, primed to reboot her closet for the next nine months. Often, a stylist will accompany them to consult on each purchase.

“Moms don’t want to wear frumpy maternity clothes, and they don’t want to suddenly feel their old personality is gone,” she said, noting it’s often first-time moms who are most anxious.

The secret, per Norris: Avoid any label expressly for pregnant women, and instead stick with brands you’d regularly buy, albeit in larger sizes and with careful choices of silhouette. Sometimes, that stylist might also consult on styling for the baby, creating outfits in advance so that the new mom can dress her newborn, stress-free.

For moms on the cusp of giving birth, she'll be arranging some unexpected services.

While some clients may be prepping for pregnancy, others might be about to give birth — and need specific support for the event.

“I’ve organized photoshoots literally seconds after someone has given birth: makeup artist, hair stylist for the mother, beautiful shots of her and her baby that she wants to put up on social media,” she said. Norris has also helped several clients brainstorm a unique hashtag for the event so they can better track all posts related to the baby.

She occasionally fields requests that even seem outré to her — as when one family tasked her with helping to name their looming newborn.

“The husband worked in branding, and felt like people had to stand out to be successful in life, so their child had to be the only one with their unique name,” she said. Norris corralled a brain trust comprising a linguist, poet, and momfluencer to create and collate a long list of names, culled down to a shortlist of seven for the family.

Their efforts proved moot. “When the baby was born, the family decided to go with a completely normal, British boys’ name,” she said. “It was hysterical.”

Late morning, and it's time to meet another mom — this time, to help outfit her nursery. 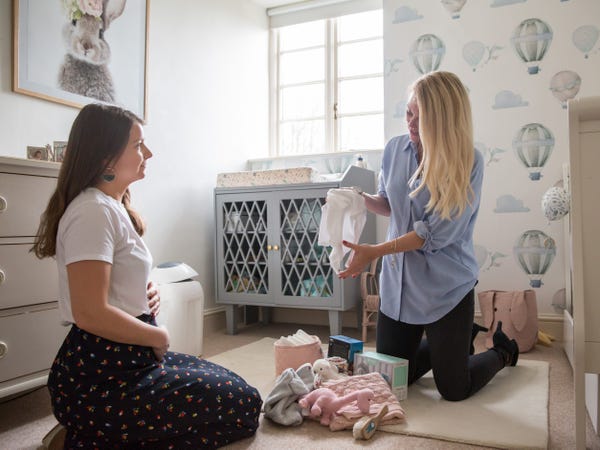 Norris also assists with outfitting a nursery, often relying on stores close to her clients’ homes in central London like Harvey Nichols and Harrods.

However, she also has alternative options, open only to insiders like her. “The sector is quite secretive and closed,” she said. “It’s an in-the-know, secret parenting club.” One example: the exclusive warehouse in London’s tony Chelsea, where one-percenter moms can go for afternoon tea and road-test firsthand every brand of stroller or baby carrier.

See, too, the raft of invitation-only antenatal classes aimed expressly at the one percent. “They’re for people, like celebrities, where the presumption is that everyone will be giving birth privately, have a maternity nurse, and a nanny or two at home,” Norris said. Small and intimate, they require attendees to sign NDAs; waiting lists means it’s vital to have someone like Norris recommend you for admittance and fast-track your approval.

Working lunches focus on finding out about new products and services on behalf of her clients. 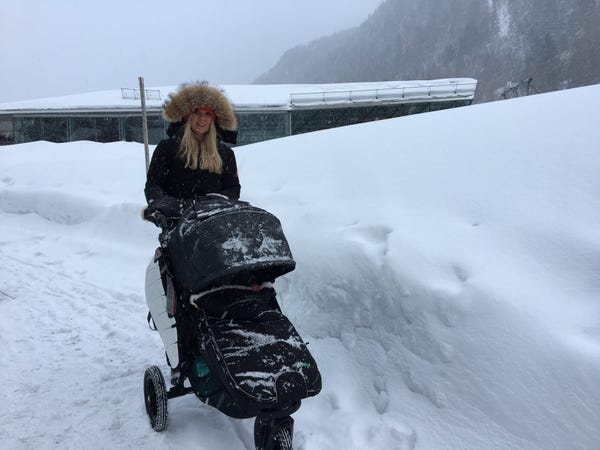 Often, Norris finds herself meeting for lunch with PR reps for baby brands, keen to solicit feedback on products — for example, the Snoo smart sleeper, already a phenomenon stateside for wealthy parents, as it rolls out to other markets like hers. “They might give it to me to test it out and work out if I’m going to recommend it,” she said.

Norris has categorically refused all paid endorsements, however lucrative, that she’s been offered — it’s vital her clients trust her advice is truly impartial, she explained.

She might also head to a hospital to help redecorate a room ready for a mother who's about to give birth. 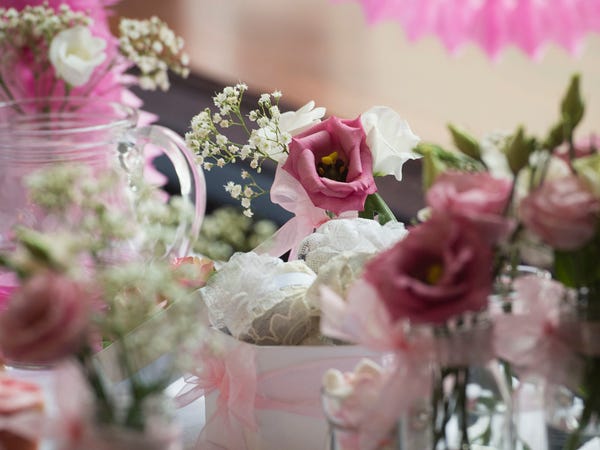 In a private hospital wing, she could spend an hour or so readying the room for a client who’s about to give birth: think Jo Malone fragrance diffusers, family photos, and high-thread-count Egyptian cotton sheets. “A lot of mums have a fear of the hospital, especially the smells, and they want it to feel like a home from home,” she said.

It’s unlikely to be an emergency appointment, though, as almost all her clients can plan ahead for their births. Indeed, she estimated that 90% or so opt for a Cesarean, often because it’s an easier way to schedule and plan for high-powered, high-net-worth women.

“A lot of these moms think it’s less invasive than giving birth naturally,” Norris said. “They will also request steroid injections afterwards, which helps turn the scar into a little silvery line, so you can wear a bikini afterward.”

She'll schedule coffee meetings most afternoons, usually to focus on recruitment, a core component of her business. 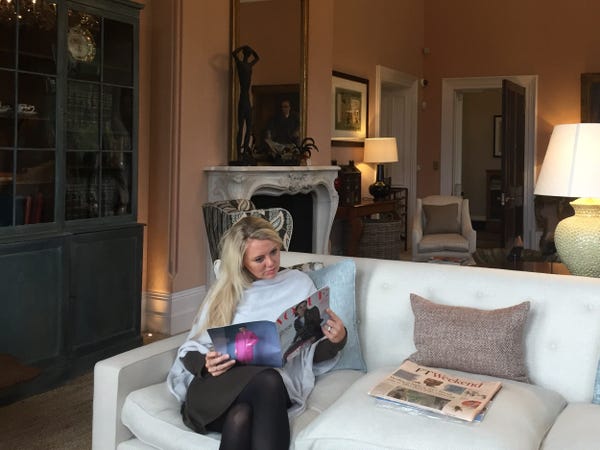 Moms particularly rely on Norris for her little black book of baby and maternity nurses. Since there’s no formal certification for the role, word of mouth and references are the best benchmark.

“It’s about matchmaking the perfect maternity nurse to the perfect family: some want a grandma figure who can give them a hug when they’re feeling down, but others who are used to staff want a nurse who’ll be there when needed — and not, when they’re not,” she said.

Her clientele is eclectic, too — one same sex couple, two dads who live in Barbados, asked her to find a nurse that wasn’t just a superb caregiver, but could offer a strong female influence to their baby.

The best maternity nurses are more in demand than an “it bag” — and have much longer waiting lists. “I speak to one, literally once a week, begging for her to work for clients of mine, but she is fully booked two or three years in advance,” Norris said. “I had one say to me that she wouldn’t get pregnant until she knew [that nurse] was available.” The reason: her decades of experience and a past client list that includes countless celebrities — a vouchsafe for her expertise, Norris said.

Other coffee meetings could include a client’s live-in chef to discuss the menu planned for weening an older baby or dropping in at the office of a cranial osteopath. It’s a big trend, per Norris, to tap the latter right now. Their skills can purportedly help restless babies if that child had experienced a forcep-assisted delivery, which could have reshaped their soft skulls.

Even immediately after birth, Norris will be helping moms plan for the next 18 years. 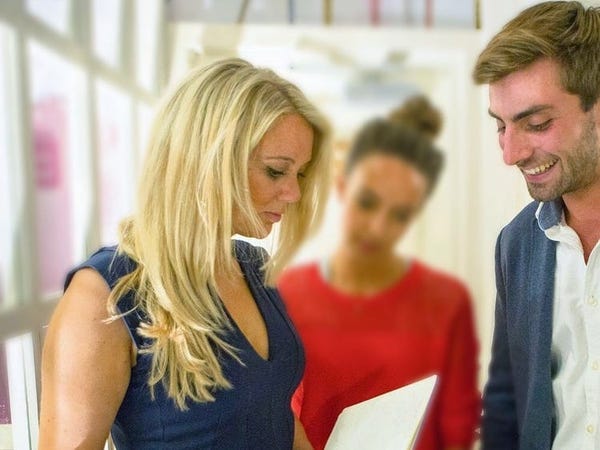 From there, Tiffany could stop in at one of the new children’s private members’ clubs that have emerged in London — think Soho House in New York for the pacifier set. These include Purple Dragon and Cloud Twelve.

“The idea is that, as a parent, you go upstairs to a spa, perhaps, while your child is having music lessons downstairs,” she said. There are waiting lists for these clubs, of course — but Norris has connections to wrangle her clients’ instant access.

She’ll also consult with parents on a prospective school for their child soon after birth; in five years’ time, all places will be taken.

Top choice: the Knightsbridge School. “You go there both because it’s a brilliant school and because you want to be seen going there,” she said.

Even though she's juggling other families, she doesn't neglect her own kids. 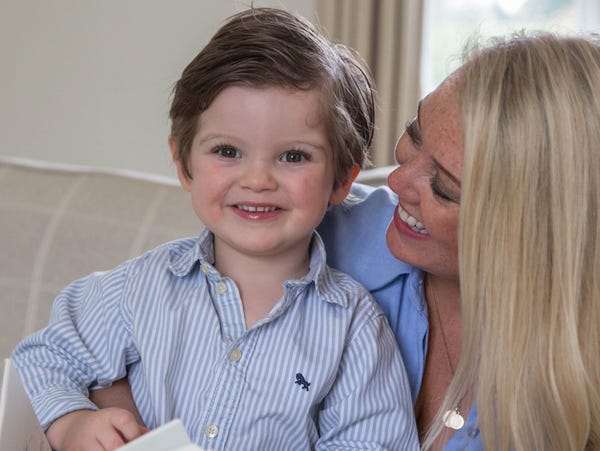 Even as she spends her working day focused on other people’s children, her own kids remain a priority.

Working from home, she’ll always try to disconnect to handle supper, bath time, bedtime, and story time for Rupert and Ophelia. As a working mom, she has a nanny, like most of her clients. She describes her as “invaluable.”

Once her son and daughter are asleep, she'll likely finish the day with a phone call or two. 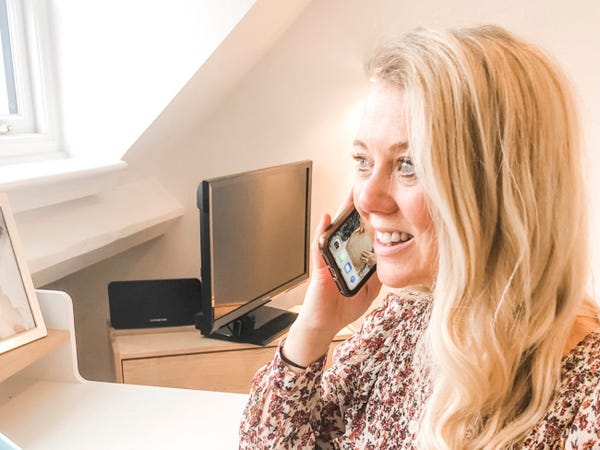 “There is no stop button on what I do,” Norris said. Indeed, it’s in the evening that she often fields emotional, perhaps tearful, calls from clients looking for solace and advice rather than practical help from a dispassionate listening ear. “They’re worried about being judged if they talk to their friends, and they trust me,” she said.

Fears around giving birth and stress regarding sleepless newborns are commonest.

“It’s one of the bits of my job I enjoy the most — at the end of every phone call, managing to make them feel better,” Norris said. “Knowing that mum is going to sleep well that night is the nicest way of finishing the day.”