Once a year Amazon celebrates its customers — and itself — by holding a sale. It's called Amazon Prime Day, and if you're so inclined, you can often score low prices on everything from Amazon Kindles to rice cookers to paper towels.

According to the latest CNBC|SurveyMonkey Small Business Survey, one in five people (20%) shopped on Prime Day 2019, which was July 15–16. That's less than half of the 44% of people who last November said they were planning to shop at a small business on another retail holiday: Small Business Saturday 2018. But to the extent that the"everything store" is directly taking on small business retailers by offering cheap prices and free delivery on everyday items, consumers are increasingly cognizant of Amazon's growing dominance.

The CNBC|SurveyMonkey Small Business Survey takes a quarterly pulse of attitudes among small business owners, while also checking in on sentiment toward small business among the general public. The third-quarter 2019 survey was conducted across approximately 10,000 Americans between July 29 and Aug. 4. For the first time since the survey began in 2017, a solid majority of the American public (59%) says Amazon is bad for small businesses — nearly three times the number who say Amazon is good for small businesses (22%).

This represents a significant shift from just two years ago, when opinion was nearly split between those saying Amazon is bad for small businesses (37%) and those saying it's good (33%). 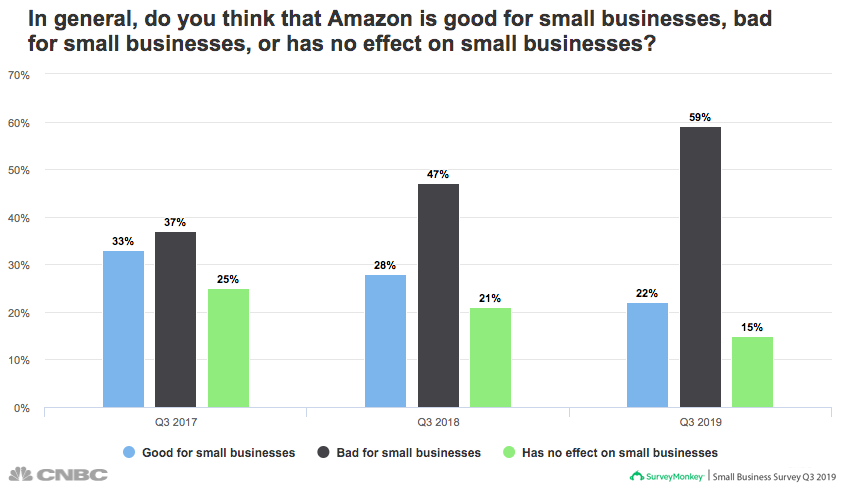 Results from the second quarter of 2018 fall squarely in the middle, with 47% of people saying Amazon is bad for small businesses and 28% saying it's good for small businesses. This indicates a steady slide toward pessimism rather than a dramatic drop-off caused by one particular event. What's driving this shift in public sentiment?

For one thing, the company has faced criticism from some prominent politicians — particularly President Donald Trump. Trump has used his Twitter account to attack the company for not paying enough taxes and taking advantage of the U.S. Postal Service, and he has often tweeted unfavorably about Jeff Bezos, the company's founder and CEO. Bezos also owns the Washington Post, which the president has derided as well, and though the two businesses are not linked in other ways, Trump frequently ties them together.

More recently, Amazon faced a public outcry after announcing that it would open a second headquarters location in New York City. This time it was the political left leading the opposition, worried that the company would change the character of the neighborhood and that new jobs would go disproportionately to high-skilled newcomers rather than those who were already living in the area.

For the record, Republicans and Democrats are about equally likely to say Amazon is bad for small businesses (64% and 62%, respectively), so the downward trend over the past two years holds across party lines.

The public overall is increasingly aware of the trade-offs involved when big tech companies take over. A recent Pew Research Center poll found a large decline from 2015 to 2019 in the number of people who say technology companies have a positive effect on the way things are going in the country.

Whether influenced by politics or not, the public's changing attitudes may reflect a changing understanding of their role as consumers. Technology companies — including Amazon, along with others such as Facebook, Google and Apple — have finally begun to attract negative attention for their monopolization of certain markets.

Earlier this summer, the Federal Trade Commission announced it would investigate Amazon for its anti-competitive practices — a clear acknowledgement that its concentrated power has put smaller businesses at a disadvantage.

Consumers can connect the dots. Amazon is often the first, or only, place people go when they want to buy something — anything — online. It's less and less sensible to say that Amazon isn't having an effect on small businesses, and fewer people today say so than before.

In 2017 a quarter of people (25%) said that Amazon has no effect on small business. By 2018 that number had dipped by four percentage points, and this quarter it fell another six, bringing the percent of people who say that Amazon has no effect on small businesses down to just 15%. More people are choosing sides in the struggle between big business and small businesses, and — for now, at least — they recognize that the online giant is dominating.

Certainly not all small business owners compete with Amazon. An independent Realtor or a private-practice dentist office, for example, faces little to no competition with Amazon. But for small businesses in industries such as retail or wholesale trade, the threat from Amazon is an existential one.

Notably, while confidence among small business owners was down by two points overall in this quarter's survey, it was down by five points in the retail trade industry, bringing it to a new low.

Small business owners who find themselves in competition with Amazon are in a tough spot. Look no further than Long Island City, where the proposed New York City HQ2 would have been located, and where small business owners themselves were reportedly nervous about their top competitor moving in. Their concern wasn't that their bicycle shops and bookstores would be competing with Amazon for customers — that was already a given. Instead, they worried their rent would go up and they would be priced out, yet another way to find themselves competing with Amazon and losing.