Australia is set for its first recession in 29 years as the country feels the impact of the virus pandemic.

Official figures show that the economy shrank by 0.3% in the first three months of the year, amid bushfires and the early stages of the outbreak.

Economists expect data for the current quarter to confirm that the shutdowns have pushed the country into recession.

It comes even after the government and central bank stepped up measures to support the economy.

The latest gross domestic product (GDP) figures highlight that the economy was struggling from a devastating bushfire season, a slowdown in tourism and weak domestic demand even before the virus-related restrictions started.

“This was the slowest through-the-year growth since September 2009, when Australia was in the midst of the global financial crisis, and captures just the beginning of the expected economic effects of Covid-19,” Bureau of Statistics chief economist Bruce Hockman said.

In March the Reserve Bank of Australia cut its main interest rate to a record low of 0.25%. The central bank also launched an unlimited bond buying programme. 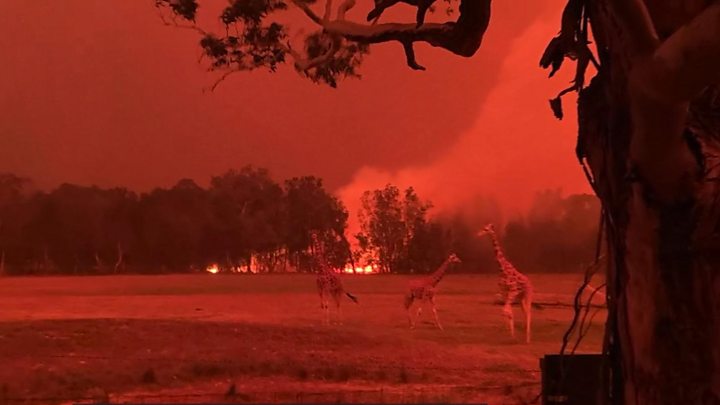 While the central bank kept the cost of borrowing on hold at its meeting on Tuesday, Governor Philip Lowe said the country was facing the toughest conditions since the Great Depression.

“The Australian economy is going through a very difficult period and is experiencing the biggest economic contraction since the 1930s.”

However, he did add a note of optimism to his outlook: “It is possible that the depth of the downturn will be less than earlier expected.”

“The rate of new infections has declined significantly and some restrictions have been eased earlier than was previously thought likely,” he said.

The Australian government has also pledged hundreds of billions dollars to help support businesses and individuals and has signalled that more stimulus measures would be announced soon.

Last month Japan fell into recession for the first time since 2015 as the world’s third biggest economy shrank at an annual pace of 3.4% in the first three months of the year.

The week before Germany, Europe’s largest economy, slipped into recession, while other big economies, including the UK and the US are also seeing sharp downturns.

A recession is widely defined as two quarters in a row of economic contraction, or shrinking GDP.