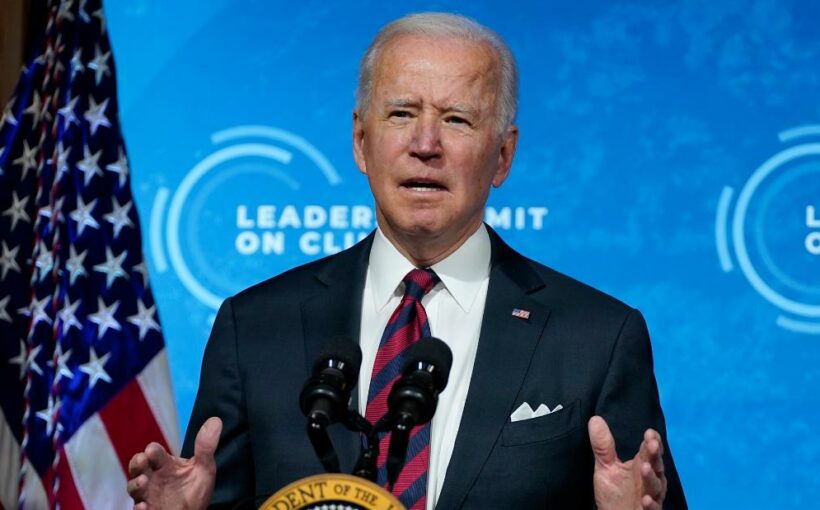 (CNN)A White House riding high on a wave of ambition is setting up a series of inevitable tests of whether Joe Biden is promising more than he can deliver.

The President’s aggressive pledge to cut US carbon emissions unveiled at his global online summit Thursday is the latest audacious bet in a presidency that is notable for a moderate tone but an increasingly expansive progressive agenda.
The scale of Biden’s plans that he will try to sell to the nation in an address to Congress marking his first 100 days next week shows his determination to use the apex of his power to forge a legacy as a generational reformer. Some admirers have already put him in the company of great Democratic Presidents like Franklin Roosevelt and Lyndon Johnson. But for such praise to be accurate, he will have to pass an agenda that aims to overhaul much of the economy to benefit American workers — and he’s about to hit a wall of Republican opposition in divided Washington.

So while the President has enjoyed a fast start, remarkable success in accelerating vaccines to fight the pandemic, and with signs the economy is stirring, real questions are mounting over his capacity to follow through. A treacherous road lies ahead that will require Biden to convince the public to embrace all of his programs and to make his opponents pay a price for opposing them.

That’s one reason why Biden’s remarks opening a climate summit that included leaders like China’s Xi Jinping and Russia’s Vladimir Putin sounded more like a speech in a Pittsburgh union hall than the blueprint of a leader bent on a costly crusade to save the world.

“When people talk about climate, I think jobs,” Biden said, billing the fight against global warming as an extraordinary economic opportunity that will put Americans to work capping abandoned oil wells and assembling electric cars.
The speech was characteristic of an emerging foreign policy in which Biden seeks to seize back the US global leadership role scorned by Donald Trump, but on terms that benefit American workers, which does not necessarily contradict the sentiments behind some of the ex-President’s populist policies.
The summit came with a pledge from the President to cut US carbon emissions by up to 52% from 2005 levels by 2030 — a significant step but one that US allies fear could be reversed by a future Republican president.
The new climate promise follows Biden’s $1.9 trillion Covid-19 rescue law — passed with only Democratic votes — and a $2 trillion package that reinvents the definition of infrastructure. Next week, that proposal, which is already meeting fierce GOP opposition, is expected to be complemented by an “American Family Plan” that could hit $1.5 trillion. If Biden can somehow leverage those policies into law, his first year in office really would stand comparison with FDR’s Great Depression policy blitz. But with an evenly divided Senate, that’s easier said than done.

Biden’s big promises are not limited to the economy.
The President added to high expectations from many of the Black voters who helped him win office by forcibly backing a bill to overhaul American law enforcement after an ex-police officer was convicted for George Floyd’s murder this week. After a series of mass shootings, he threw his support behind new gun safety bills that have passed the House, the latest occasion in which he has come out in support of a Democratic priority after previous questions in Washington about how much political capital he would deploy. 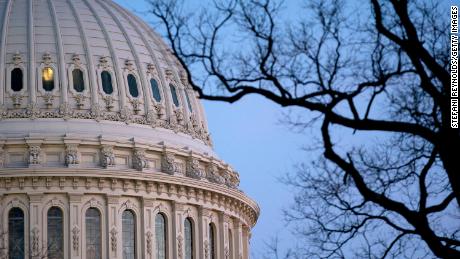 Biden has also voiced support for a sweeping election reform bill that is, like the policing measure, awaiting action in the Senate. The bill would reverse many of the efforts GOP-controlled state legislatures have undertaken to limit the vote, and many Democrats believe that passing it — which would likely lead to all out political war in the Senate — is necessary to preserve the party’s hopes in future federal elections, not to mention American ideals about equal access to the franchise.
So far, Biden has skillfully used his early popularity and goodwill, finally putting in place an organized, science-based approach to the pandemic, to ease the way for his political priorities. His Covid rescue plan was widely backed by the public, allowing him to redefine bipartisanship by arguing that while GOP lawmakers were opposed, many of their constituents were not.
Polls also suggest that Biden’s infrastructure plan — at least at the start of what is likely to be a bitterly divisive fight over its fate on Capitol Hill — is popular.
But while no one could make a case that the start of a presidency born in the worst public health crisis in 100 years and a consequent economic meltdown was easy, the politics facing Biden’s agenda are set to get much tougher.
Ultimately, perhaps not this year, but certainly next, the President will likely face a choice on whether to shelve some of the most ambitious goals or to overcome his opposition to removing or amending filibuster rules that allow Republicans to block his proposals by demanding a 60-vote Senate supermajority.
At that point, the straddle between more moderate voters in his national coalition and the increasing impatience of progressives in his Democratic Party will be tough to sustain.

While Biden did not lay out a plan for how he will honor his pledge on carbon emissions, which will require a significant retooling of the US economy, he repeatedly stressed the need for huge involvement from the private sector. But it is likely that a significant portion of the funding and initiatives for the emissions cuts depend on the passage of the infrastructure bill that lays the groundwork for a 21st century green, sustainable economy.
That is where Biden has a problem.
It is far from clear that the entire Democratic caucus in the Senate is on board with an infrastructure proposal that splashes funds on projects far removed from the traditional understanding of such a plan. Biden wants to use tens of billions of dollars, for instance, to fund home health and elderly care. If the President cannot get 50 Democratic votes, even apparently uncertain efforts to pass it with a budget tactic known as reconciliation could be in doubt. 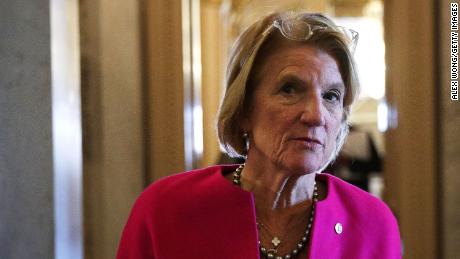 A group of Republican Senators on Thursday sought to exploit this conflict with a rival proposal worth nearly $600 billion — far short of the President’s target — that takes a traditional approach to repair roads, bridges, highways, airports and public transport.
It does not include funding to create new electric vehicles and environmentally friendly projects, or to deepen the US social safety net.
“We see this as an offer that is on the table and deserves a response,” West Virginia Republican Sen. Shelley Moore Capito said on Thursday, in remarks apparently calculated to play into the penchant for some moderate Democrats — like her fellow Mountain Stater Sen. Joe Manchin — to seek bipartisan solutions.
The size of the package is similar to a counter offer that Biden rejected to the Covid-19 rescue plan and captures the massive gulf in perception about America’s greatest challenges between Republicans and Biden.
Traditionally both sides would get in a room and decide a compromise, which Democrats and Republicans could brand as victory because each walked away with something of what they wanted.
But modern politics, where power has tended to be used to the maximum and compromise is near extinct, doesn’t work that way. For Senate Minority Leader Mitch McConnell’s Republicans, who are tied to a pro-Trump base, depriving Biden of a win could be a greater victory than fulfilling some legislative goals. That’s especially the case since many of the most controversial Democratic priorities like election reform are likely to move to the center of debate far closer to next year’s midterm elections.
And for all Biden’s talk of unity and bipartisanship — a useful political device that has so far not seemed much in evidence in his presidency — he has given clear signals that he is not willing to pare down his aspirations.
Accepting the GOP offer on infrastructure — or even one that meets him halfway — would force Biden to abandon his entire sense that a moment of history has given him the chance of a radical reforming presidency.

Police reform is the next big test 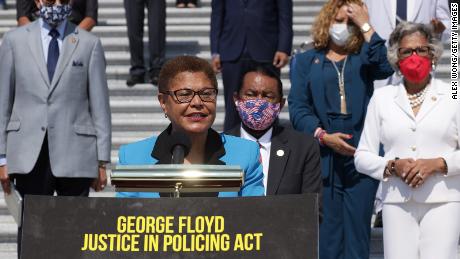 A similar dynamic is playing out over the police reform bill, which is being held up over the question of dismantling qualified immunity, a legal doctrine that critics say shields police officers from civil lawsuits.
Civil rights campaigners say the change is crucial to removing the sense of impunity that they feel has contributed to law enforcement’s excessive use of force against minorities, like ex-cop Derek Chauvin kneeling on George Floyd’s neck for more than nine minutes. But senior Democrats understand that the policing issue is also politically fraught — trapping the party between a core constituency of African American voters and White moderates in the suburbs — some of whom were influenced in the last election by Republicans’ largely misleading accusations that Democrats want to “defund the police” — an attack that’s reemerging ahead of 2022.
As part of a compromise proposal, South Carolina Republican Sen. Tim Scott is suggesting a new approach whereby police departments, rather than individual officers, could be liable for misconduct. But some key progressives believe that having the ability to hold individual officers accountable is the only way to change the dynamics between law enforcement and minorities.
There are some positive noises coming from Democrats involved in the talks, so an ingenious compromise that satisfies all sides seems possible.

But any backing away from overhauling qualified immunity would dismay progressives and civil rights advocates, who believe the Floyd case could and should mark a turning point in US history that helps usher in fundamental reform.
And the issue of police reform is just one of a flurry of priorities that will challenge Biden’s own moderate instincts and require the application of relentless, and potentially inflammatory, presidential power.
Source: Read Full Article