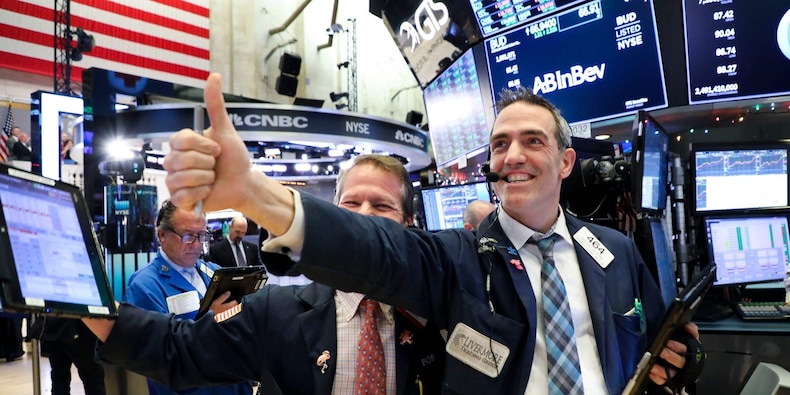 Investors should reduce their allocation to bonds and use those proceeds to buy stocks, Ned Davis Research said in a note on Thursday.

The research firm said a bullish uptick in the global breadth of earnings growth favors stocks more than bonds, and technical momentum indicators are also exhibiting signs of strength for equities.

And excess liquidity, which will likely continue as Congress considers passing another $1.9 trillion stimulus package, supports “the prospects for more double-digit returns,” NDR said, adding that the market expects economic growth to be revived by the easy financial conditions.

Consistent with secular bull markets, the S&P 500 has now advanced for 72 days without a 5% correction, and 227 days without a 10% decline, NDR highlighted.

And the current rally in stocks could go on for a lot longer.

“With the secular bull resuming, the rally could be expected to continue for another 878 days before it would reach the mean number of days without a 20% decline in a secular bull,” NDR said.

Despite the bullish outlook, NDR warned that valuations are stretched, based on recent records in the market cap to GDP ratio.

“While the valuations and ratios are consistent with a secular bull, their stretched levels warn that the bull has been getting mature,” NDR said. Inflation is another indicator investors need to keep a watchful eye on as stocks move higher, the note said.

“While it now appears likely that another secular bull upleg is underway, warranting maximum exposure to equities, the secular potential may again be in question if reflation leads to overheating, moving the central bankers and bond vigilantes to lower the temperature,” NDR said.

But between now and then, “there should be substantial time and upside potential for equities to continue trending higher,” NDR concluded.