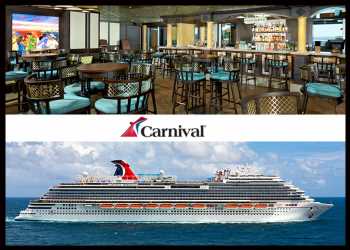 Carnival Cruise has kicked off its guest operations on Independence Day with its first cruise in almost 16 months and since the onset of the pandemic. Carnival Cruise Line President Christine Duffy, Carnival Corp. President and CEO Arnold Donald and Carnival Brand Ambassador John Heald kicked off the festivities with a ribbon-cutting ceremony officially welcoming guests on board.

The Centers for Disease Control and Prevention or CDC had recently allowed Carnival to begin sailing again with strict safety protocols, aimed at preventing Covid-19 from spreading onboard as it was when the pandemic began, with several high profile outbreaks on ships.

Royal Caribbean Cruises was the first cruise operator to sail from a U.S. port since the onset of the pandemic, with its Celebrity Edge cruise leaving Miami last Saturday.

Carnival Horizon departed on Sunday evening from Port Miami for a six-day cruise with stops in Amber Cove in the Dominican Republic and the private Bahamian island of Half Moon Cay.

The start of the cruise operations is expected to significantly boost the local and state economy and provide thousands of jobs in South Florida that support the cruise industry.

Florida is number one in the nation in cruise embarkations with the cruise industry contributing more than $9 billion in direct purchases and responsible for over 159,000 jobs. In Miami-Dade alone, cruise activity generates approximately $7 billion of spend and 40,000 jobs annually. Nearly 37 percent of the 437,000 cruise industry-supported jobs in the U.S. are in Florida.

The cruise resumption is also a shot in the arm for Miami’s longshoremen as about 800 members at PortMiami had their wages dropped by as much as 80 percent during the nearly 16-month cruise suspension.

Apart from further boosting the economy, the resumption of service in Miami provides guests with a much-anticipated vacation as it is called the cruise capital of the world.

Carnival has lined up more cruise departures, with Carnival Breeze departing from Galveston on July 15 and Carnival Miracle kicking off the line’s Alaska season from Seattle on July 27. Mardi Gras, the line’s newest ship, sets sail from Port Canaveral on July 31. Other ships in the Carnival fleet will begin service in August.

Carnival Cruise Line, known as America’s Cruise Line, has a total of 24 ships that sail from 14 U.S. homeports and employing more than 40,000 team members from 120 nationalities. The line’s newest and most innovative ship, Mardi Gras, features the first roller coaster at sea and the first in the Americas powered by eco-friendly Liquefied Natural Gas (LNG) starts sailing from Port Canaveral on July 31, 2021.