Home » Derek Chauvin's trial is testing the stress levels of Black Americans. Here's what leaders and allies can do to help. 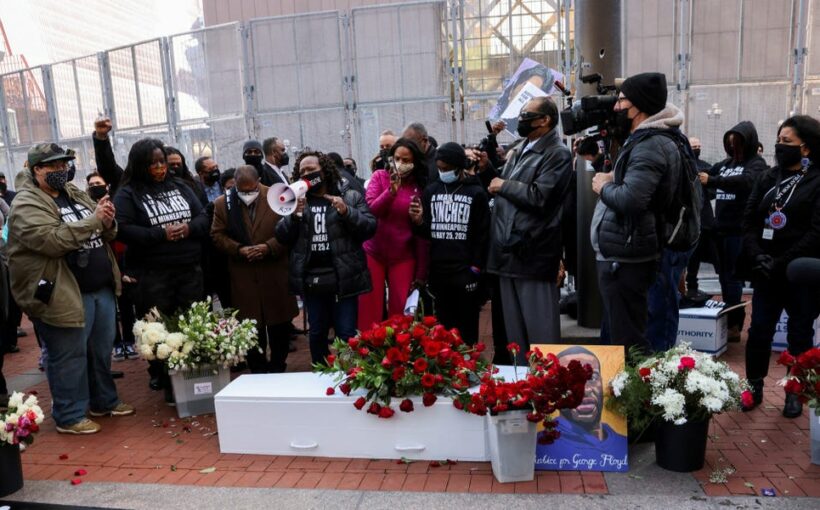 On a recent lunch break, Dion Bullock watched the trial of Derek Chauvin, the former Minneapolis police officer charged in the death of George Floyd.

Bullock’s body tightened as he listened to a 9-year-old witness describe Floyd’s struggle as Chauvin knelt on his neck. “I felt angry that a child had to relive the trauma of that day and have her testimony dissected publicly,” he said.

Then he heard an electronic ping; he was needed on a client call. He turned on his laptop’s camera, and his smiling colleagues, chatting about the weather, greeted him. “I grappled with the tension in that moment: Do I share the pain I am feeling from watching the trial or do I compartmentalize it?”

Bullock, who works at Bravely, a career-coaching company, recognizes the dark and profound irony of his emotions. His job involves helping organizations build more equitable workspaces. “How do I process this as a person? How do I help other Black people process it? And how can I help allies and white people?” he said.

Research has found that police killings of Black American men, including Freddie Gray, Michael Brown, and Eric Garner, can take an enormous toll on Black people’s mental health. And after a year in which racial tension and political unrest gripped the nation and a pandemic disproportionately harmed Black and brown communities, the Chauvin murder trial is severely testing their stress levels.

Psychologists tell Insider that Black people might feel afraid to speak up in the workplace about what they’re going through, for fear of retaliation. Against the backdrop of a murder trial that’s seen as a referendum on racial justice, these highly charged emotions have important and far-reaching implications for managers, allies, and Black employees.

“You already feel like a target and that the work environment is not a safe place,” said Danielle Spearman-Camblard, a Connecticut-based psychologist and therapist who specializes in racial trauma.”When a trial like this is affecting your emotional health and job performance, you feel like you can’t go to your supervisor without risking a slap on the hand. You put up and shut up and go into survival mode.”

Watching or reading about the Chauvin murder trial, a veritable weekslong narrative of a traumatic event, is triggering for many Black people. In psychology, the effect is known as vicarious or secondary trauma, which is caused by exposure to survivors who have been traumatized themselves. This kind of trauma is associated with burnout, emotional exhaustion, and lower levels of accomplishment, Farah Harris, a psychotherapist based in Illinois, told Insider.

“There are layers of trauma Black Americans have to grapple with,” Harris said.

The effects of intergenerational or historical trauma — trauma that a cultural or racial ethnic group experiences related to events or institutions that oppress that group, such as enslavement — compound the pain, she said.

Juggling the psychological weight of the trial with work obligations — catching up on coverage during a midmorning coffee break and viewing fragments of testimony between Zoom meetings — creates a sense of dissonance. Emotions are raw, and people feel fragile.

Briana Young, an MRI and CT technologist based in Georgia, said she can bear to watch the trial only in short clips at a time. Even then, she feels her blood pressure rise.

“I’m angry,” she said. “It’s like watching a trainwreck. Derek Chauvin is a white supremacist who looked at George Floyd as less than human. It’s infuriating.”

Normally after her 40-minute drive to work, she spends a minute or two practicing deep breathing and meditation to help center herself and focus on the workday ahead. Now, during the Chauvin trial, she spends twice the time meditating.

“I desensitize through meditation,” she said. “That’s the only way I can continue to function without continuing to function in anger.”

André Blackman, the founder and CEO of North Carolina-based Onboard Health, an executive recruiting firm focused on inclusivity in healthcare, echoed the sentiment. “There are moments throughout the day where I look at the headlines to get a sense of how things are progressing,” he said. “But there’s an emotional toll if I check in constantly.”

He describes his psychic state as a burning, low-grade frustration mixed with feelings of emotional numbness. He worries that Chauvin will not be convicted, despite the haunting video of Floyd’s death. An acquittal would repeat a history of past outcomes in which a Black man is killed by police on camera and officers suffer no legal consequences.

“I feel like this is the moment: Society will have a conscience, and justice will be served,” Blackman said. “But I’ve been let down time and time again

Black employees are in need of support from their organizations, said Tina Opie, an associate professor in the management division at Babson College. “Let’s not put the burden on Black employees to be the arbiters of their own sanity in the workplace. Let’s instead put the responsibility and burden on white leaders to demonstrate empathy for their workers and to put in place systems and processes that dismantle systemic racism.”

Managers need to open lines of communication with their employees and make clear that they care about their team members’ emotional and social well-being. They should also encourage workers to take a mental-health day and also say explicitly that they will not face penalties for asking for temporary reprieve from their workload.

In an ideal world, managers know to “extend grace and empathy,” toward Black employees, but workers might have to explicitly ask for compassion. “Say, ‘This is tough. I need to either disconnect or pause regular work for a little bit.'”

Most importantly, Opie said, managers must not put Black employees in the position of having to serve as a resource to help others in the organization understand the trial as a teachable moment.  “Don’t request anything extra from them,” she said.

Educate yourself on your own, Beverly Tatum, a nationally recognized scholar and author of multiple books on race in America, told Insider. Order books on the topic, watch documentaries, and read first-person accounts and essays from Black writers.

Harris recommends allies check in on Black colleagues but only if they have a close relationship. Otherwise, outreach could come off as offensive. “You want to avoid performative allyship,” she said, referring to instances in which allies, often white allies, want to be seen as a good person.

Harris recommends language along the lines of: “Hey I wanted to see how you were doing given everything going on with Chauvin’s trial. Don’t worry about responding to this message. Focus on your own well-being, but know I’m here to talk.”