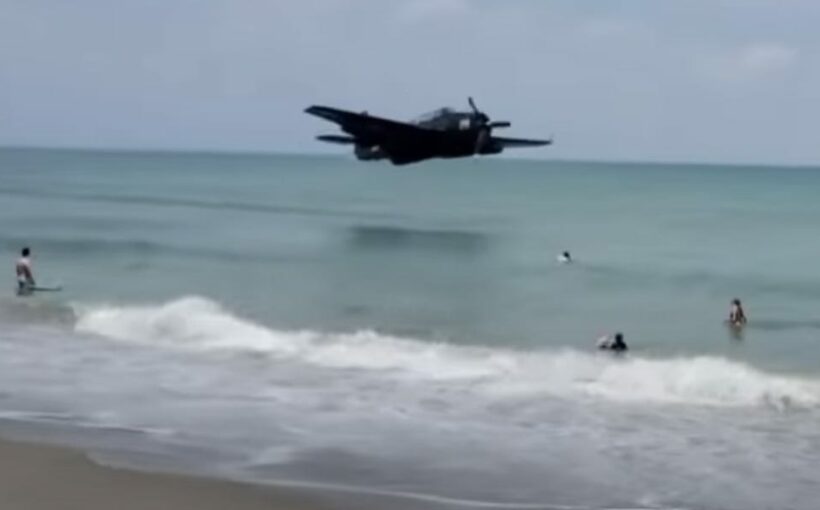 There were no injuries reported in the impressive display of airmanship by the TBM Avenger pilot.

The Grumman TBM/TBF Avenger is a single-engine, propeller driven, carrier-borne strike and torpedo bomber with a three-man crew. The aircraft was made famous in the Pacific during WWII in battles that include Midway and the sinking of the giant Japanese battleships Yamato and Mushashi.

The aircraft could carry either 2,000 pounds of bombs or a single Mk. 13 torpedo in the anti-shipping strike role. The Avenger was flown by former US President George H.W. Bush, who also survived an accident in his TBM Avenger during WWII when he bailed out of his aircraft before being rescued by a US Navy submarine.

The Grumman TBM Avenger involved in yesterday’s ditching was flying with several other types of historic planes during the airshow including a twin-engine C-47 Dakota transport in a loose trail formation just prior to the ditching. A small amount of smoke briefly appeared from the aircraft in some videos just prior to the emergency water landing.

The pilot did an impressive job of ditching the aircraft in the shallow water directly in front of a beach area where spectators were watching the flight demonstrations. The aircraft can be seen flying slowly at wave-top level before finally stalling with wings level, then gently entering the water with what appears to be little damage.

The aircraft involved in the accident, number 91188, was originally built by the Eastern Aircraft Division of General Motors Corporation in 1945 and operated for the US Navy as Bureau Number 91188.

Today the aircraft flies under civil registration number N108Q and is owned by the Valiant Air Command.

The Grumman TBM Avenger involved in the incident was restored to flying status just over a year ago on January 11, 2020, following an extensive 18-year restoration to airworthiness. Prior to her restoration, she had last flown from 1956 until 1964 while operating as a water bomber in the forest fire suppression role for the US Forestry Service in Davis, California.

In 1964, the aircraft was transferred to the Georgia Forestry Commission in Macon, Georgia where she continued the firefighting mission until 1969 when she was transferred between a series of private owners until purchased by the Valiant Air Command in 2002.

The Valiant Air Command was flying four aircraft at the Cocoa Beach Airshow including their flagship C-47 Dakota “Tico Bell,” a North American SNJ-4 trainer, an N2S Steerman biplane trainer and the TBM Avenger involved in the incident.

Ironically, the TBM Avenger that went down in the accident yesterday is painted in the same markings as one of the five TBM Avengers that disappeared in a famous incident in the “Bermuda Triangle” on December 5, 1945 that claimed the lives of 14 crewmen and an additional 13 that disappeared in a PBM-5 Mariner involved in a search operation for the five aircraft. The incident has remained as a significant piece of lore in the Bermuda Triangle superstition.