Several environmental groups sued the U.S. Department of the Interior on Wednesday in order to block a significant rollback of the Endangered Species Act.

Last week, the Trump administration announced a major overhaul to the Endangered Species Act that it said would reduce regulations.

The administration’s changes ended blanket protections for animals newly deemed threatened and allowed federal authorities for the first time to take into account the economic cost of protecting a particular species.

The groups involved in the lawsuit include the Natural Resources Defense Council (NRDC), the Center for Biological Diversity, EarthJustice, Defenders of Wildlife, the Sierra Club and the Humane Society of the United States.

“In the midst of an unprecedented extinction crisis,” said Rebecca Riley, legal director for NRDC, “the Trump administration is eviscerating our most effective wildlife protection law.”

What species are at risk? Here are some of the USA’s most endangered species

The Endangered Species Act protects more than 1,600 species in the USA and its territories. Since being enacted in 1973, it has saved 99% of listed species from extinction and has brought species like the gray wolf and bald eagle back from the brink. 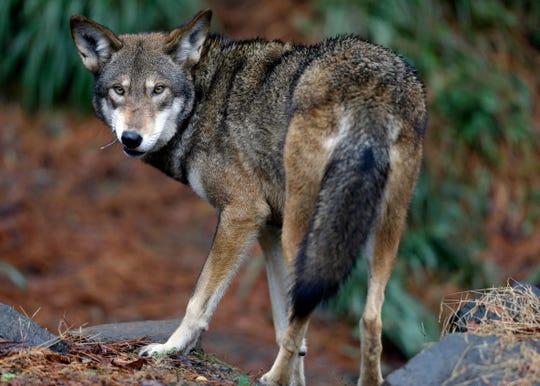 A male red wolf enjoys a feeding in its habitat at the Museum of Life and Science in Durham, N.C. (Photo: Gerry Broome, Gerry Broome, AP)

Wednesday’s lawsuit makes these claims against the Trump administration’s new rules, according to EarthJustice:

“Trump’s rules are a dream-come-true for polluting industries and a nightmare for endangered species,” said Noah Greenwald, endangered species director at the Center for Biological Diversity. “Scientists around the world are sounding the alarm about extinction, but the Trump administration is removing safeguards for the nation’s endangered species. We’ll do everything in our power to stop these rules from going forward.”

This is the first set of claims in what will be a larger legal challenge, the Humane Society said.

In a comment about the lawsuit, the Department of the Interior told USA TODAY that “it is unsurprising that those who repeatedly seek to weaponize the Endangered Species Act – instead of use it as a means to recover imperiled species – would choose to sue. We will see them in court, and we will be steadfast in our implementation of this important act with the unchanging goal of conserving and recovering species.”