Molson Coors announced the drink this week, using a similar strategy that Anheuser-Busch used when it launched Bud Light Seltzer earlier this year. Like Bud Light Seltzer, Coors hopes drinkers recognize its brand and wins over drinkers craving the low-calorie and low-sugar drink.
However, in an increasingly crowded field, Coors Seltzer is marketing itself as a sustainable alternative with a “mission to help save America’s rivers.” Every 12-pack sold will restore 500 gallons of fresh water to the country’s rivers through a partnership with the environmental group Change the Course. 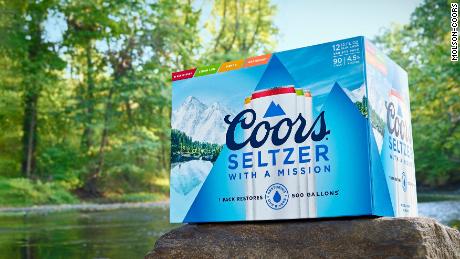 Coors Seltzer is launching with four flavors — black cherry, mango, grapefruit and lemon lime — that will all be sold in a variety pack. Similar to its competitors, each 12-ounce can has 90 calories and 4.5% alcohol by volume.
It joins Molson Coors (TAP) growing portfolio of beverages that aren’t beer as customers increasingly shy away from heavy drinking. Last year, the company announced a name change and strategy pivot to attract younger drinkers with new choices, including seltzers and even non-alcoholic drinks.

Vizzy launched earlier this year and has sold “incredibly strong” so far, according to a Molson Coors spokesman. The company markets the drink as a “better-for-you” spiked seltzer because it’s brewed with antioxidant Vitamin C. It’s currently the sixth top-selling hard seltzer, according to Nielsen’s tabulations.
Molson Coors also recently struck a deal with Coca-Cola (KO) to distribute its new Topo Chico Hard Seltzer in the first half of 2021. Coca-Cola, which purchased Topo Chico in 2017 for $220 million, is launching the cult-favorite sparkling water with four flavors: tangy lemon lime, exotic pineapple, strawberry guava and tropical mango. 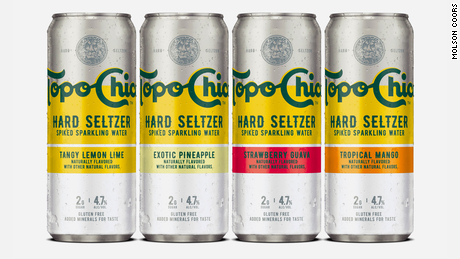 For Molson, the three seltzers, plus its new deal to distribute Yuengling nationwide, shows it’s building a “recession-resistant portfolio.” That’s according to a new note from Laurent Grandet, a Guggenheim analyst.
“We continue to think the portfolio is well suited to an economic environment where consumers will likely evaluate more closely how they spend money on discretionary purchases such as alcohol,” he wrote this week.
Surprisingly so, there’s still a lot of money to make in the spiked seltzer wars. Sales keep skyrocketing, per new Nielsen numbers given to CNN Business.
Year-to-date hard seltzer sales is $3.2 billion — a staggering 188% increase from the same time period a year ago when it was $1.1 billion.
Nielsen said that White Claw remains the top-selling beverage, with Truly Hard Seltzer in second place, Bud Light Hard Seltzer in third and Corona Seltzer in fourth. There are more than 65 brands on shelves, compared to around 30 brands last year.
That’s going to keep growing, too. Michelob Ultra Organic Seltzer is rolling out in 2021, which is calling itself the “first national USDA-certified organic hard seltzer.” It will be Anheuser-Busch’s sixth spiked seltzer brand in its portfolio aimed at attracting a variety of different drinkers.

It already sells Bon & Viv, Social Club Seltzer, Natty Light Seltzer, Bud Light Seltzer, which just added new flavors. Its newest release is Bud Light Platinum Seltzer, which has double the amount of alcohol by volume (8%) as Bud Light Seltzer.
“Within the hugely successful and growing hard seltzer segment, new and ‘old’ brands alike can succeed even if their market share is relatively small or declining, because the total pool of sales of hard seltzer within US retail is growing at such a high rate,” Danelle Kosmal, VP of Beverage Alcohol at Nielsen, recently told CNN Business.
Source: Read Full Article