One in five industry women who responded to the Anita Hill-led Hollywood Commission’s survey on sexual harassment said they’d been sexually assaulted at work over the course of their careers. And 1 in 20 said that they were sexually assaulted on the job in just the 12 months prior to taking the groundbreaking survey, which was released Tuesday.

“In each category, participants point to high rates of undesirable conduct that continues despite efforts to curtail it,” Hill said in the report, titled “The Hollywood Survey Report #4: Sexual Harassment and Assault.” “The entertainment industry can and must do better.”

Males are also the victims of sexual harassment in the industry – but at rates half that of females. Ten percent of the 4,026 men who responded to the survey said that they’d been sexually assaulted during their careers, with 80 men saying that they’d had been sexually assaulted on the job in the 12 months prior to taking the survey. More than 360 men said they’d been subjected to sexual coercion, and more than 880 said they’d received unwanted sexual attention at work over the past year. 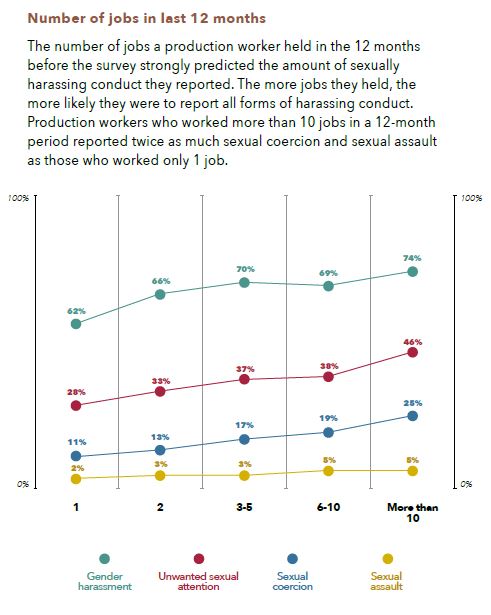 The report found that gender harassment – such as demeaning jokes, comments based on gender, or sexually crude and insulting terms – is by far the most common type of harassment, followed by unwanted sexual attention, such as continually being asked for dates, drinks, dinner, etc. even after being discouraged. In terms of frequency, these types of harassment are followed by sexual coercion – such as the tying of promotions or preferred treatment to sexual cooperation – and sexual assault, which the commission defines as everything from unwanted kissing and groping to non-consensual sexual intercourse.

The report also found that younger women and men are more often the targets of sexual harassment than their older peers. More than three-quarters of all female respondents between the ages of 24-39 told the commission that they experienced gender harassment in the 12 months before taking the survey, which was conducted online over a three-month period from November 20, 2019-February 2020.

Hill told Deadline that the more common types of gender harassment are “gateways” to the more egregious forms of sexual coercion and assault, and that addressing the culture of workplace gender harassment could ultimately reduce instances of on-the-job sexual assault and coercion.

Studying the data, she said, “I started to see the connections between these types of behaviors. Gender harassment is the most prevalent type of harassment: it’s not necessarily sexual; it’s not physical, but it is demeaning based on gender. Aside from the prevalence of it, it’s also a gateway to worse behavior, and it’s happening most often to young people. Putting those things together, it’s almost like an indoctrination into the industry workplace. Young people are experiencing it, and it’s a gateway to worse behavior. So when you put those things altogether, you start to understand the next set of data, which is unwanted sexual attention, and then it goes on to sexual coercion, and then escalates to sexual assault. So what we have is behavior that if we start to check it at the gender harassment level, we might be able to reduce it significantly at the assault and coercion level.”

The report includes numerous written statements by respondents who have experienced sexual harassment and abuse in the workplace. “I have had men in positions of power make comments on my body, touch my breasts, reach up my skirt, expose themselves to me. All uninvited,” wrote a female respondent. “I have stopped taking one-on-one drinks or business dinners with male colleagues as too often they try to turn it into a date.”

And while many cases of alleged sexual assault and harassment have made headlines in the wake of the Harvey Weinstein scandal, the vast majority of gender harassment goes unreported. “Only about 1 out of 4 workers (28%) who said they experienced some form of gender harassment, unwanted sexual attention or sexual coercion talked to a supervisor, human resources, or their legal department,” the report said. 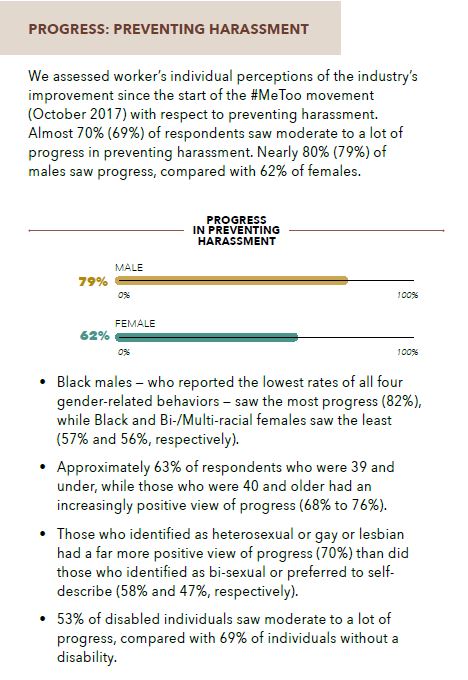 Most of those who took the 110-page survey, however, found that the industry is making progress. Of the 9,630 respondents, nearly 70% said they’ve seen “moderate to a lot of progress” in preventing harassment in the industry since the start of the #MeToo movement in October 2017.

Even so, only 62% of female respondents said they’ve seen progress, compared to 79% of males. “I have worked in the industry for twenty years,” another respondent told the commission. “I have been sexually assaulted and subjected to unwanted touching more times than I can count. I have been demeaned because of my gender. I have witnessed far worse happening to other people. I still see the same level of abusive behavior directed at younger, more vulnerable people. I have reported through supposedly confidential processes and then been the victim of retaliation. I have no confidence that the situation is improving, despite the public statements by industry leaders professing to want to make change.”

The report found that males are the perpetrators in the “overwhelming majority” of incidents of sexual harassment or sexual assault of females, who identified the offenders as male in 95%-98% of all forms of harassment. “When it comes to gender harassment and unwanted sexual attention, females are frequently harassed by coworkers and other peers; those with influence and power are not the most common perpetrators of gender harassment and unwanted sexual attention. Males with influence and power are, however, the most common perpetrators of sexual coercion and sexual assault.”

“I hope #MeToo has brought a lot of positive change to the industry and how it treats women,” wrote a male respondent. “But I wish someone of higher-profile would speak up for male victims. It’s not just women who have been harassed and I think there’s this idea that it only happens to women. I know plenty of men who have had to put up with sexual harassment and no one talks about it or it gets swept under the rug.”

This is the fourth report the Commission has released. Prior reports dealt with accountability, bias and bullying. See all the commission’s reports here.

Union status also plays a significant role in the frequency of harassment, with the more vulnerable non-union members reporting the highest rates of all harassing behaviors, compared to union members.

For its part, the Hollywood Commission will publish several responsive resources next month, including:

• A code of conduct to create safe, equitable, and harassment-free workplaces that reflects feedback from workers and contributions from industry organizations. It will include definitions and examples of discrimination, harassment, sexual harassment (including gender harassment, unwanted sexual attention, sexual coercion, and sexual assault), and bullying specific to entertainment, as well as reporting policies and procedures.

• A production field manual that will set forth best practices and an employer checklist, tips, and sample policies for workplace meetings, social media, alcohol and drugs, and a vendor code of conduct, along with recommendations for employers to implement, including transparent complaint processes and investigations; informal and formal mechanisms to raise concerns and make reports; and multiple reporting avenues that are consistent standards for holding all offenders accountable, regardless of position.

• An online workers’ guide to harassment, discrimination, and retaliation that will allow workers to learn about their rights, how and where to report, and what resources and support are available to them, including counseling and legal resources.

“An industry standard official resource site supported by all the guilds and unions and industries for reporting and information would be invaluable,” one of the respondents wrote.

The commission, formally known as the Hollywood Commission on Eliminating Sexual Harassment and Advancing Equality, will release the final report on its survey, with recommendations, next month. The commission was founded three years ago by Lucasfilm president Kathleen Kennedy, and entertainment attorney Nina Shaw. Its member organizations include the major studios, networks, streaming services, talent agencies, record labels, unions and guilds, and the film and TV academies.

The commission’s survey was conducted under the auspices of the Ethics & Compliance Initiative, an independent nonprofit organization. The Commission thanked all those who took part in its survey, and acknowledged that its report was “informed by the efforts of the many people who shared their data, insights, ideas, enthusiasm, and expertise,” including: