Overstock.com CEO and founder Patrick Byrne announced his resignation in ashareholder letter that said in part he was too “controversial” to be an effective head of the company.

The news came after a bizarreAugust 12 statement in which Byrne said he assisted in federal investigations into the 2016 presidential election and was involved with the “Deep State” and had worked with law-enforcement officials, who he called “the Men in Black.”

On the same day his resignation was announced, Byrne claimed in multiple television appearances that the FBI had ordered him to maintain his romantic relationship with Russian spy Maria Butina.

His public claims over the past week were just the latest in years of unconventional statements from the executive.

Byrne bought the Salt Lake City-based D2-Discounts Direct in 1999, renaming it Overstock, and was at its helm until August 2019. 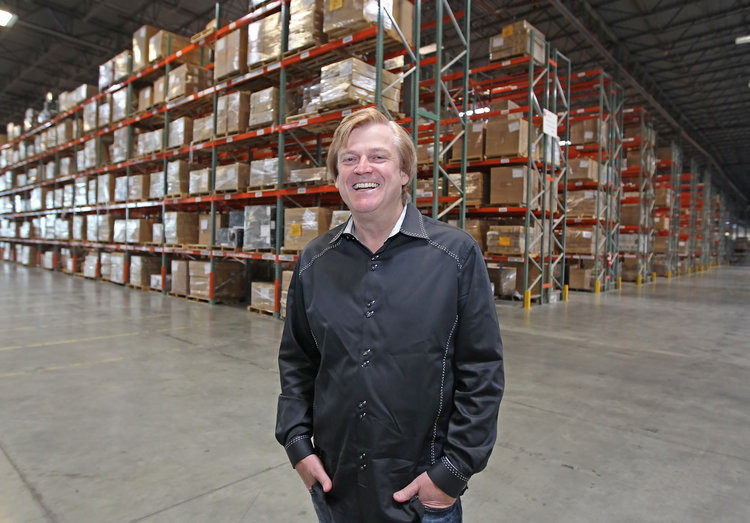 Byrne grew up around big business, as his insurance executive father’s banner career attracted high-profile associates like billionaire Warren Buffett, who called the elder Byrne “the Babe Ruth of insurance” and was a regular houseguest.

He studied philosophy and Asian studies at Dartmouth before pursuing a graduate degree in mathematical logic from Stanford University while bedridden, fighting testicular cancer. He went on to study at Cambridge University and pursue a philosophy doctorate from Stanford.

In the late 1980s, Byrne took aim at run-down hotels, casinos, strip malls, office space and apartment buildings across the country, which he invested in and developed for huge profits.

In 1997, Byrne joined a Berkshire Hathaway-backed company that made uniforms for police, firemen, and military. By 1999, he saw an opportunity for profits by selling leftover inventory online.

Through his investment holding company, Byrne shelled out $7 million for the majority stake in D2-Discounts Direct, which he renamed Overstock.

Under its ambitious leader, Overstock emerged as an innovative powerhouse in e-commerce. However, trouble arose years later when it was later overshadowed by competitors like Amazon and Wayfair.

After a few years in the company, Byrne gained a reputation as a free-wheeling leader. 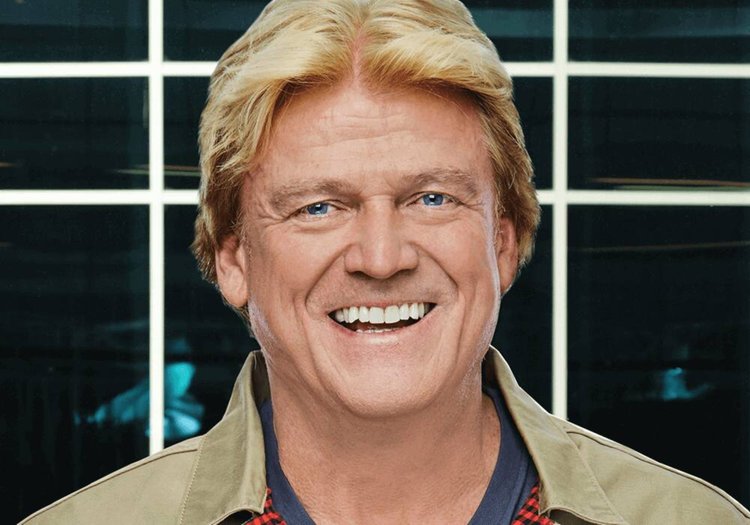 The company’s stock first showed signs of trouble in 2005.

Byrne became convinced it was because of naked short-selling by investors, an illegal practice in which investors sell shares in a company without actually borrowing the shares, typically using leverage.

Forbes reports that in a now-infamous August 2005 conference call, Byrne ranted that hedge funds, journalists and regulators were conspiring to “push down the company’s stock price under the direction of some faceless menace he called the ‘Sith Lord.'”

Overstock then sued a short-selling hedge fund and research firm, which had been critical of the company.

In 2007, Forbes reported that Byrne filed a $3.5 billion lawsuit against 11 of the biggest banks on Wall Street, including Goldman Sachs and Morgan Stanley, accusing them of participating in a “massive, illegal stock market manipulation scheme” that distorted the company’s stock price by facilitating naked short-selling.

The litigation lasted a decade and only turned up a handful of settlements, including a $20 million payment from Merrill Lynch in 2016.

The outburst, his seemingly chaotic managing style, and hislong-touted passion for cryptocurrency created an image of Byrne as a free-wheeling leader.

On August 22, Byrne announced his resignation in a shareholder letter and alluded to ties he had to a Russian spy. 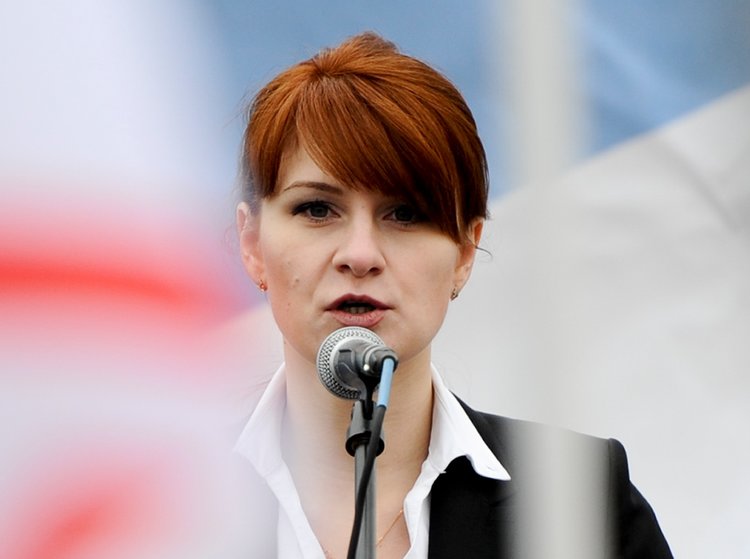 In July,Byrne announced that he was involved in an FBI probe into the Russia investigation and claimed to have had a relationship with Russian spy Maria Butina, who is currentlyserving an 18-month prison sentence after pleading guilty to conspiracy to act as a foreign agent, in connection to the 2016 presidential election.

Butina’s attorney told The New York Times that Byrne and Butina were in fact previously “romantically involved” and developed a relationship over a three year period, following their initial meeting at a Libertarian conference in 2015.

Byrne says that Butina initially attempted to court him with conversations about guns and blockchain. They kept in touch and later rendezvoused in New York, according to The Times, where they began their romantic relationship. Byrne says he became suspicious when Butina began asking about being put in contact with members of 2016 presidential campaigns, at which point he began discussions with the FBI.

In August, Byrne announced his resignation in ashareholder letter that insisted his “presence may affect and complicate all matter of business relationships.”

The letter began by stating that the founder is “already far too controversial to serve as CEO” and he does “not wish to disrupt possible strategic discussions.”

The news followed anAugust 12 statement from Byrne that said he assisted in federal investigations into the 2016 presidential election.

In the “comments on Deep State” statement, Byrne referred to law-enforcement officials as “the Men in Black” and said his choice to go public was encouraged by his “Omaha Rabbi,” Warren Buffett.

The August 12 press release drew attention to his three-year relationship with Butina, butThe New York Times reported that the statement, which doesn’t specifically mention their relationship, was intended by Byrne to reveal his issues with how the federal government handled its case against Butina.

In multiple television appearances the same day he announced his resignation, Byrne made several startling claims about being an FBI operative. 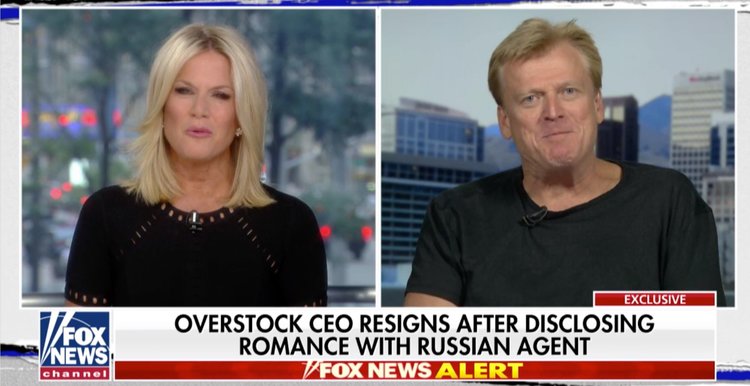 Byrne claimed onFox News’ “The Story” that he had a longstanding relationship with federal investigators that he had helped in the past, including to “help them take down people on Wall Street.”

He said FBI officials reached out to him in 2016 and he later received “fishy” orders from former FBI official Peter Strzok.

“I was given some fishy orders and I carried them out in 2015-2016, thinking I was conducting law enforcement,” he said.

When MacCallum asked Byrne what Strzok purportedly asked him to do, Byrne would only characterize his objectives as “political espionage.”

In a live interview with CNN that aired the same day, Byrne claimed that the FBI directed him in the summer before the 2016 election to pursue a “romantic relationship with Butina.

When pressed by CNN anchor Chris Cuomo on “Cuomo Prime Time,” Byrne emphasized that FBI agents had directly ordered him to pursue a relationship with Butina.

“Just to be clear Patrick, so people understand what’s going on here, the FBI wanted to you continue your association to get information,” Cuomo said. “They never told you you needed to have romantic relationship with somebody?” 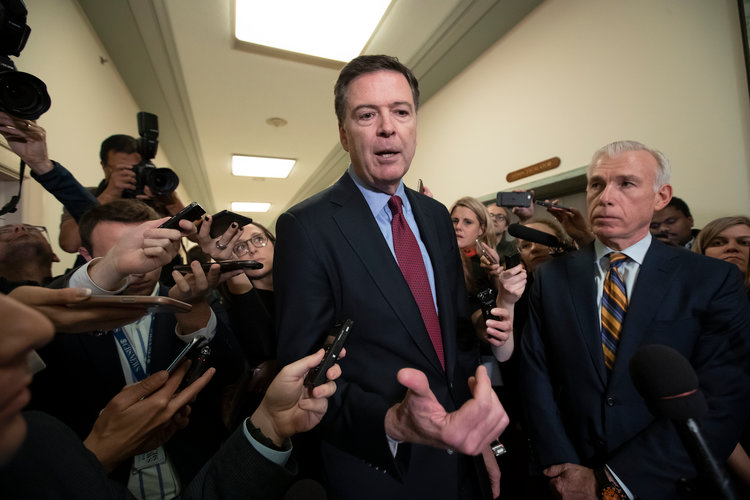 Former FBI deputy director and CNN contributor Andrew McCabe told CNN after the interview that he hadn’t heard of Byrne until the former CEO revealed his relationship with Butina.

McCabe told CNN that it was “certainly possible” that Byrne volunteered information about Butina to the agency, but agents would not have “engaged in a romantic relationship with a suspected Russian intelligence agent.”

“That is simply not the sort of thing that the FBI does,” McCabe told CNN.

CNN reported that a US official said Byrne met earlier this year with Justice Department officials and shared information about his relationship with Butina, aspects of which were found to be believable.