In recent months, Germany has become the epicenter of Europe's anti-lockdown movement, as thousands of people have been taking to the streets to defy social distancing measures and mask mandates.

The anti-lockdown protesters, who include conspiracy theorists, far-right extremists, anti-vaxxers, and coronavirus skeptics, have united to accuse German lawmakers of triggering unnecessary panic and infringing on civil liberties.

Many of the recent protests have been organized by the "Querdenken 711" movement, which has also been backed by Robert F. Kennedy Jr., a prominent anti-vaxxer and the nephew of former president John F. Kennedy.

Experts also worry that the movement is becoming increasingly radical. Most of QAnon's European followers are largely based in Germany, and more demonstrators at anti-lockdown protests are seen waving Q flags.

QAnon advocates claim that the US is secretly controlled by a cabal of politicians, celebrities, and media figures who engage in child abuse and pedophilia and that President Donald Trump will eventually move against these people. Its believers seek clues from an unknown government insider known as Q. There is no evidence to support the theory, and none of its foretold reckonings have taken place.

Scroll down to find out more about how Germany became the epicenter of Europe's anti-lockdown movement and how QAnon played a role.

Over the last few months, Germany has seen a growing anti-lockdown movement which has become one of the largest in Europe. 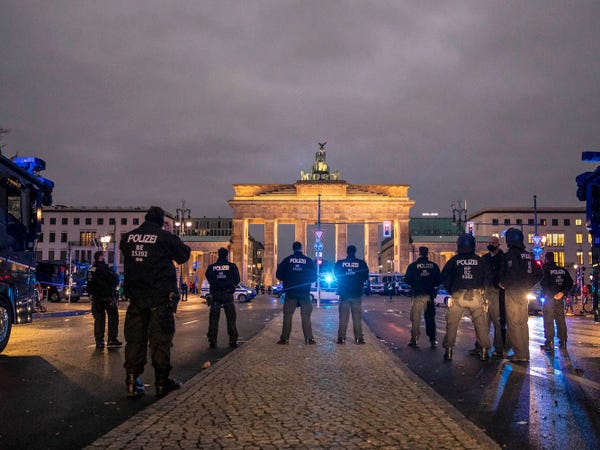 This week, Berlin saw more than 10,000 protesters rally in front of the Reichstag — Germany's parliament — in defiance of social distancing measures and mask orders. 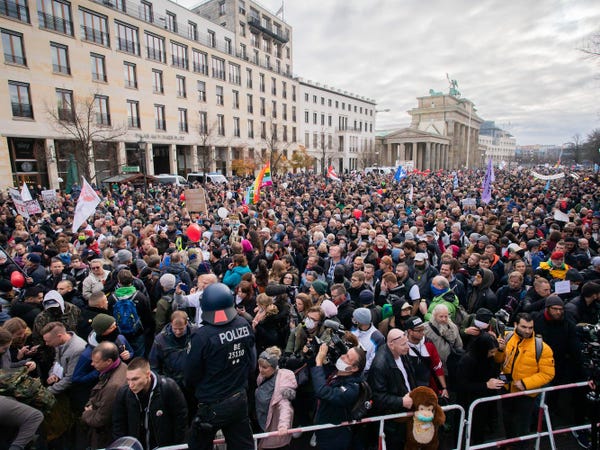 Police used water cannons to disperse the protester and several arrests were made. 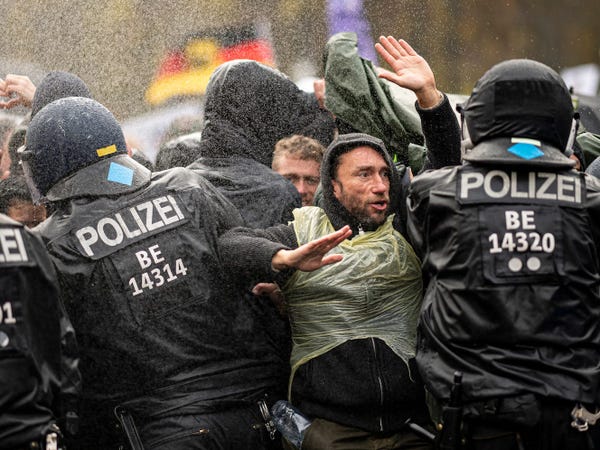 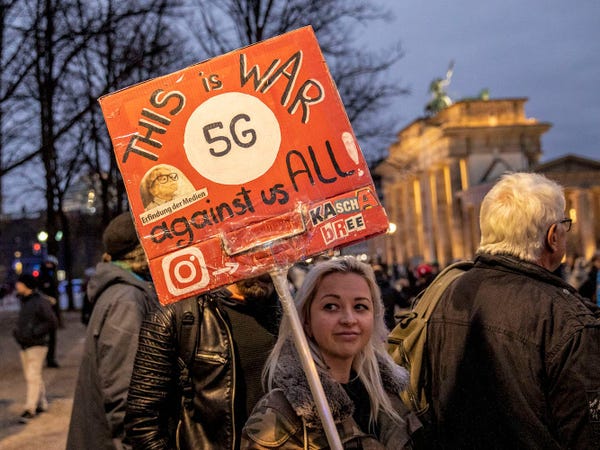 Although these diverse groups have drastically different world views, they have united to accuse German lawmakers of triggering unnecessary panic, calling the COVID-19 measures "dictatorial." 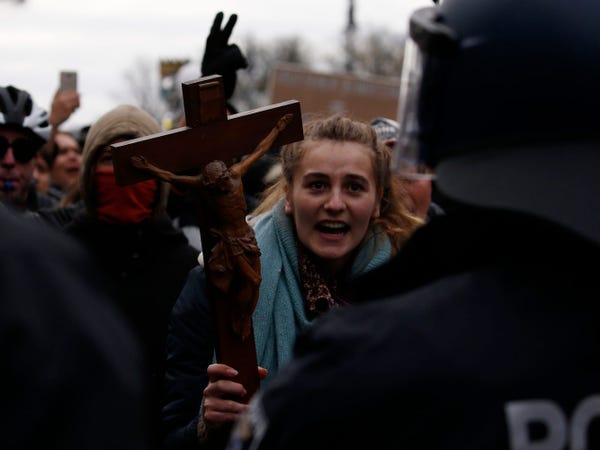 While the movement claims it's "neither right nor left", it does not condemn fascism and racism and has welcomed neo-Nazis and members of the far-right political party, AfD. 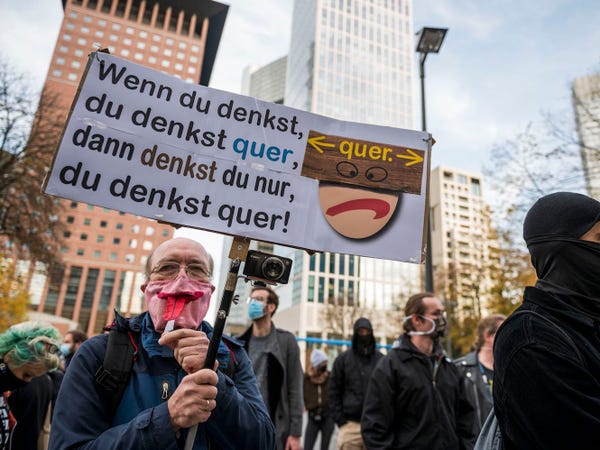 Recent demonstrations have been organized by the "Querdenken 711" group, which translates into "Lateral Thinking 711" and was first launched in Stuttgart (the city's phone code is 711) in mid-April. 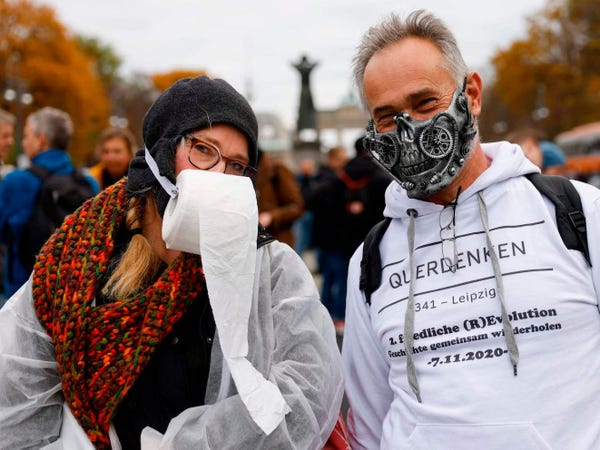 It was founded by a 46-year-old computer entrepreneur called Michael Ballweg who claims on his website that the group is "non-partisan" and does "not exclude any opinion." 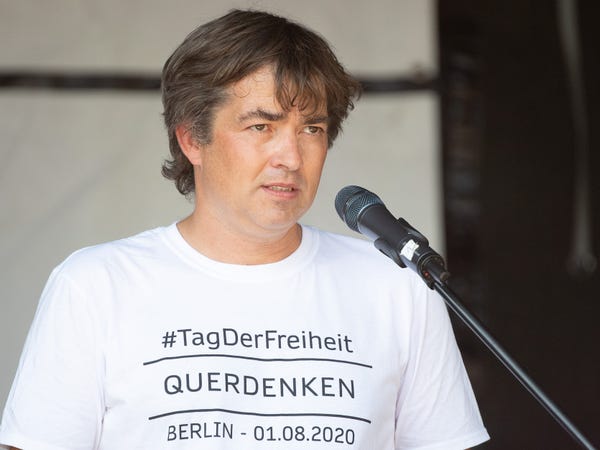 However, Ballweg's slogan about the unity of the group is: "Where we go one, we go all," lifted directly from the conspiracy theory QAnon. 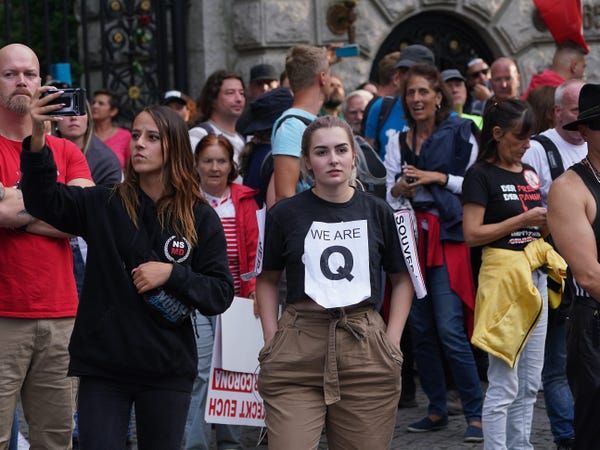 The protests have become increasingly radical, with the number of followers of QAnon-related accounts on all platforms in Germany rising to more than 200,000. 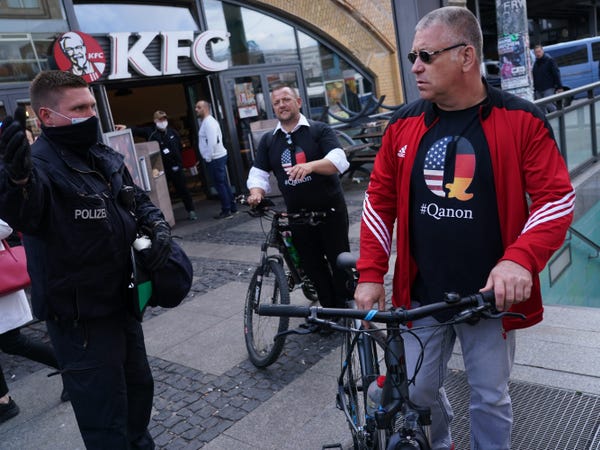 "I was astonished that QAnon is gaining such momentum here," Patrick Sensburg, a lawmaker in Angela Merkel's conservative party, recently said."It seemed like such an American thing. But it's falling on fertile ground." 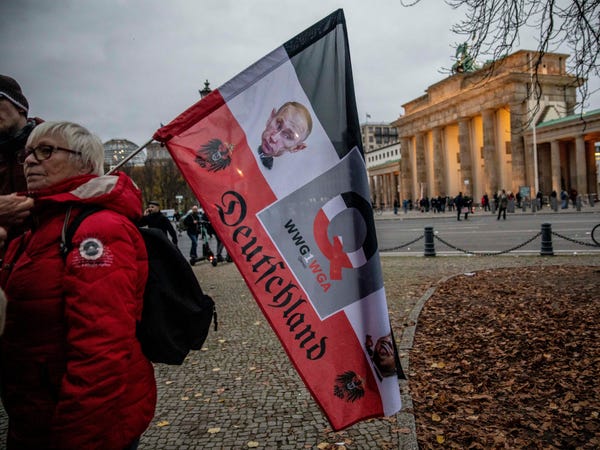 But it's not just Germany that is worrying political leaders. Other European domestic intelligence and law-enforcement services, including those in France and Belgium, now also consider the QAnon conspiracy theory a significant security concern. 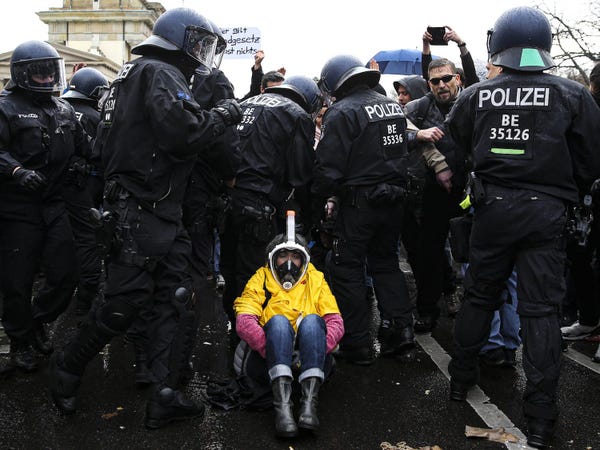 One prominent American figure who has also openly endorsed "Querdenken 711" is Robert F. Kennedy Jr., who is the nephew of former President John F. Kennedy. 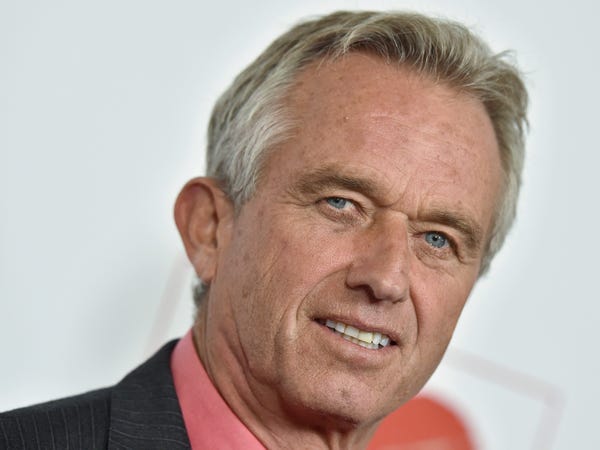 Kennedy is an anti-vaxxer who owns an organization called Children's Health Defense, which promotes the idea that Bill Gates has a "globalist" agenda for mandatory vaccinations.

The 66-year-old also once insisted that top US infectious disease expert Dr. Anthony Fauci seeks to poison "an entire generation of Americans" with a COVID-19 vaccine, The Daily Beast reported.

Kennedy even spoke during one of the movement's rallies in Berlin alongside Ballweg. According to some reports, his appearance prompted German QAnon Telegram channels to go into a frenzy. 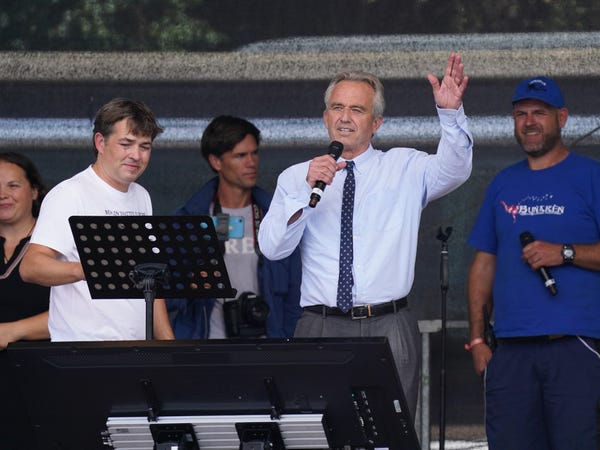 Another outspoken figure in the movement is Heiko Schöning, who is a founder of the anti-vaccination group Ärzte für Aufklärung ("Doctors for Enlightenment") and is also a regular speaker at Querdenken events. 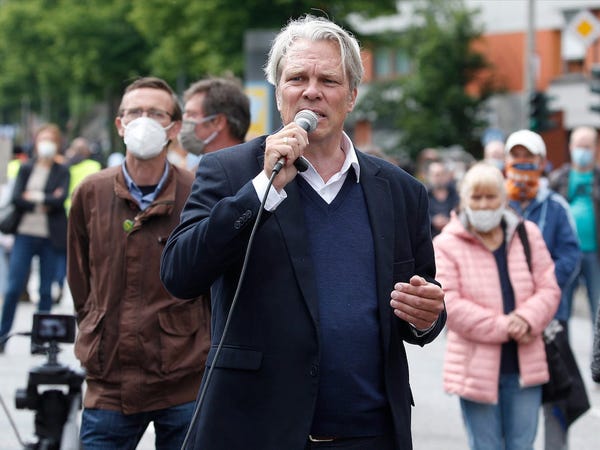 Schöning was arrested in London in September after he appeared at an anti-lockdown protest in Trafalgar Square.

A partial lockdown has been in place across Germany since November 2 and lawmakers are discussing extending the lockdown until Christmas. 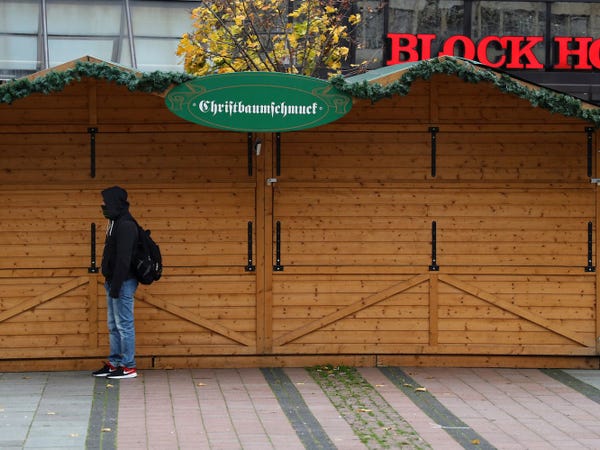 Government spokesman Stefan Seibert said lockdown measures "were not expected to be relaxed" and that winter festivities were unlikely to go ahead, the Guardian reported.

Germany has previously been praised for its handling of the pandemic and some experts believe that its success is partly to blame for the rise in protests. 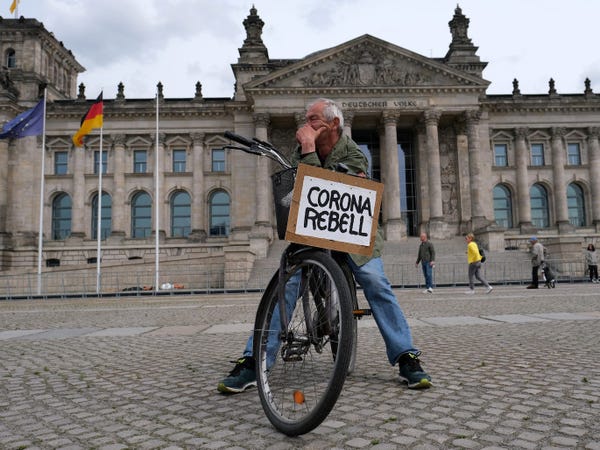 "Virologists say there is no glory in prevention; if prevention is successful, people don't see the danger," Thorsten Quandt, a professor at the University of Münster, told CNN in September. "The irony is the less you can feel it, and more successful you are with pandemic measures, the more people say we should stop [those measures]."

Even though there is a growing movement against the COVID-19 lockdown, the majority of Germans are still in support of it. 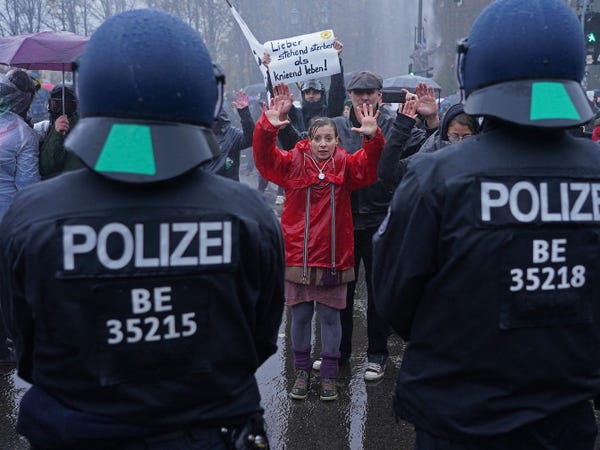 In a recent national survey, more than 58% said that the lockdown measures were just right.

Polls also show that trust in Merkel's conservative government is high, while the far-right party known as AfD, has been struggling, the New York Times reported.

Do you have a personal experience with the coronavirus you’d like to share? Or a tip on how your town or community is handling the pandemic? Please email [email protected] and tell us your story.