Home » Business » They broke into their own gym defying Covid-19 rules, hear why

New York (CNN Business)The owners of hundreds of New York City indoor fitness studios are suing Mayor Bill de Blasio for barring them from reopening their businesses along with the rest of the city’s gyms last week.

The lawsuit was filed Wednesday by members of the newly formed Boutique Fitness Alliance — which represents about 100 group exercise studios in the city — and the New York Fitness Coalition, which comprises about 2,500 combined gyms and fitness studios throughout the state.
Last week, New York gyms that have complied with New York Gov. Andrew Cuomo’s coronavirus safety measures were allowed to reopen. But Mayor de Blasio stipulated that group classes were excluded from the reopening. He argues they have a higher risk of spreading the virus.

Boutique Fitness Alliance Founder Amanda Freeman and New York Fitness Coalition President and CEO Charlie Cassara say the mayor has no proof group that fitness classes spread coronavirus more than other gyms.
Freeman, who owns 26 Strengthen Lengthen Tone studios in seven states, including 12 in New York City, expressed frustration with the Big Apple maintaining its Covid-19 shutdown when other cities and states like neighboring New Jersey have lifted theirs.

“We were able to open studios in some states in early July,” Freeman told CNN Business. “In New Jersey, pilates and yoga classes were actually allowed to open before the rest of gyms. We’ve been open in other states and haven’t had any [Covid-19] incidents.” 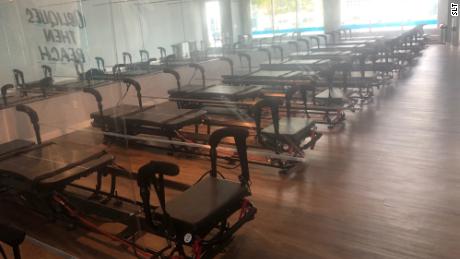 A spokesman for de Blasio’s office said the city’s public health experts have determined indoor fitness classes are a high-risk activity for coronavirus transmission and preventing a resurgence in Covid-19 cases is the mayor’s top priority.
“Other cities have shown us how quickly Covid-19 can return, and we’re determined to heed those warnings,” the mayor’s Deputy Press Secretary Mitch Schwartz told CNN Business Wednesday. “For now, that means avoiding high-risk activities that involve concentrations of people, breathing heavily, in small spaces.”
Both Freeman and Cassara said the current gym guidelines give large gym corporations like Equinox and Planet Fitness a competitive advantage over smaller fitness studios, which Cassara said are run mostly by small business owners.
“It’s giving them a head start bringing in members while we’re still mandated to be shut,” Cassara said.

Freeman, who said her fitness studio company generates about $15 million in revenue a year, says government shutdowns have cost her about $7 million in lost revenue.
“It’s crazy to think anybody is going to survive this if it continues to go on,” she said.
Source: Read Full Article