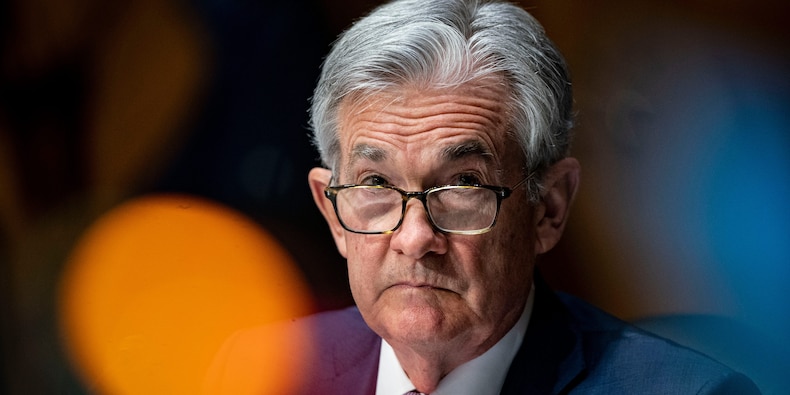 Investors keep a close watch on long-dated yields as they are tied to a range of lending programs such as mortgages and auto loans. Yields have been rising, while bonds sell off, as investors continue to price in expectations of higher inflation as the US economy recovers from the COVID-19 crisis.

But the increase in borrowing costs has stoked selling in growth stocks, including large-cap tech stocks that have run up over the past year. Thursday's moves included Apple falling by 2.3%, Google's parent company Alphabet down by 1.1%, and Microsoft losing 1.7%. The Nasdaq Composite, home to numerous tech stocks, lost 1.4%, and the S&P 500's information technology sector slumped 1.5%.

The 10-year yield on Wednesday reached its highest since January 2020 as investors positioned themselves before the Federal Reserve released its policy decision and economic projections. The central bank's upgraded economic outlook included its view that gross domestic product will expand by 6.5% this year, up from the prior estimate of 4.2%.The 10-year yield pulled back from the 1.6% area during Wednesday's session before roaring higher again on Thursday.

"Right now the market is pricing in a rate hike in the latter half of 2022, which we think is very early and, in fact, it's nearly mathematically impossible for the Fed to hike in 2022 if they truly intend to look past transitory inflation," Calvin Norris, US rates strategist at Aegon Asset Management, told Insider on Thursday. "What the market is implying is the Fed is going to cave on this persistency-of-inflation idea."

Fed Chairman Jerome Powell on Wednesday reiterated the central bank's stance of allowing inflation to rise past 2% to support growth in the labor market and the economy before it starts raising interest rates.

While tech stocks sold off, bank stocks charged up, with Bank of America gaining 4.1%. Banks aim to lend money on long-term rates and the increase in long-dated yields improves their prospects for growth in interest income.
Wells Fargo climbed 3.8% and JPMorgan Chase popped up 3.5%.

"While it's difficult to say when this might occur but we're kind of setting the stage for some type of counter-trend rally here in Treasuries," said Norris. "Treasuries are oversold, sentiment is extremely bearish, Treasuries are very cheap to foreign buyers," he said.

"I think the market is trying to challenge the Fed. But if you do believe the Fed and the projections for growth and inflation, valuations look very attractive at these levels. Not to say that they can't get cheaper and be more attractive but we're at those levels that I think it's difficult to add to short positions in here," Norris added.