Home » Business » Trump Told U.S. Business to Leave China. This Is Why They Can’t.

SHANGHAI — In the space of 24 hours, President Trump ordered American businesses to leave China and suggested in a tweet that he has the authority to do so.

Whether he has that power is a question for Washington lawmakers and lawyers. Perhaps the more important question is whether severing American businesses from China is at all feasible.

At least in the short term, it’s not. American business is deeply intertwined with China, and untangling it would be messy and potentially destructive for the global economy.

On a long-term level, a shift is already underway. American tariffs and growing tensions between Washington and Beijing are forcing many companies to rethink their reliance on China. But China’s convenience and its vast and growing consumer market make it difficult for many businesses to abandon China entirely.

“We are seeing companies redirect investment, and it’s because of the uncertainty,” said Ker Gibbs, the president of the American Chamber of Commerce in Shanghai. “I don’t think it’s because they are abandoning the Chinese market.” 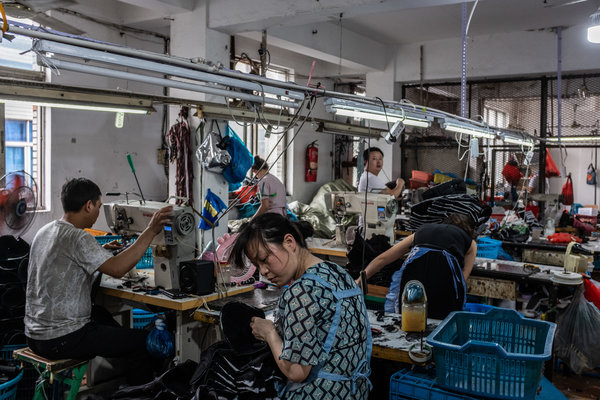 How is China tied to the global economy?

Anybody who has looked at the label to see where products are made knows China is central to what the world uses. Chinese factories make iPhones, iPads, video game consoles, auto parts, industrial magnets, plastics, chemicals used in manufacturing, and a host of other essentials that keep the world’s economic gears running.

China is the most efficient place to produce a wide variety of goods. It has built vast networks of smaller factories that supply essential components to large factories. It has a work force of hundreds of millions of people who know how to staff an assembly line. It has fast trains, smooth highways and efficient ports that dependably move goods from the factory floor to the world.

China already makes a quarter of the world’s manufactured goods. That can’t be replaced anytime soon.

Efficient factories aren’t China’s only draw. Although the Chinese economy — the second largest after the United States — has begun to slow, its consumer market is growing. By some estimates, there are more middle-class consumers in China than people in the United States.

China’s growing consumer class accounts for a huge proportion of global sales of iPhones, Nike shoes and Starbucks lattes. It buys Chevrolets and Fords, though they are largely made in China. Its increasingly adventurous tourists create demand for Boeing planes. Increasingly affluent Chinese consumers have a taste for American steak, and they want more pork from pigs that eat American soybeans.

Why is it difficult to leave?

Factories are already leaving China, as Washington and Beijing impose higher tariffs on each other’s products.

But Mr. Trump’s latest threats have further alarmed American business leaders that changes in trans-Pacific trade relations are moving faster than they can adapt.

“Business is pretty numb about all of this,” said Rufus Yerxa, the president of the National Foreign Trade Council, a Washington-based business group. “They’re in shock about how badly this has all started to go.”

However, the process is slow and difficult.

Companies like GoPro and Hasbro have openly discussed setting up shop elsewhere. Not all of the companies shifting operations are American: Danfoss of Denmark has relocated some production of heating and air conditioning equipment to the United States from China to avoid tariffs, reduce transport costs and limit shipping-related emissions of gases that cause global warming.

Others have sharply cut back their operations as the Chinese economy has slowed. Ford, for example, has seen its car sales in China wither and has responded by laying off thousands of contract workers.

Still, relations between China and the United States may improve someday, perhaps after Mr. Trump leaves office. If that happens, companies that have moved their supply chains could find themselves at a competitive disadvantage compared to those that have stayed in China.

Different industries face different dilemmas. Low-wage, low-skill industries like shoe manufacturing, toymaking and apparel production have already shifted toward Southeast Asia or places like India or Bangladesh, because blue-collar wages in China have soared eightfold in dollar terms over the past 15 years.

Other sectors, notably electronics, are finding it more difficult to cut ties. China dominates production of a vast array of components, with multiple companies bidding aggressively to supply practically anything a company might want.

Even Vietnam, despite its proximity to China and the strong presence of electronics giants like Samsung, does not yet have a well-developed supply chain for electronics.

Will companies return to the United States?

For all of Mr. Trump’s talk of bringing manufacturing jobs back to the United States, that isn’t likely to happen.

Low unemployment has made it hard for companies to find factory workers in the United States. Workers in China commonly accept overnight shifts, allowing factories to run day and night, and often agree to live in factory dormitories for several years. American workers tend to resist such arrangements.

The United States also cannot match China’s ability to make the small parts that power the Chinese manufacturing machine. When Apple tried to build a modest number of high-end computers in Austin, Tex., it had trouble finding a nearby supplier that could make the right kind of screws. It ended up relying on a small business that delivered 28,000 screws over 22 trips.

What other problems do companies face?

Rupert Hogg said on Aug. 16 that he would resign as the airline’s chief executive after the Chinese government objected strongly to its employees’ participation in street protests that have seized Hong Kong in recent months. Cathay is based in Hong Kong and the state-owned Air China owns a minority stake in the company. But it is controlled by the Swire Group, one of the oldest British businesses in Asia.

Until Mr. Hogg’s departure, practically no one foresaw that the chief executive of a big multinational company would have to leave because of a political issue involving China. A rapidly lengthening list of Western companies — among them Marriott and Daimler, and Coach and Versace — have apologized in the past two years for products or online offerings that could be interpreted as suggesting that Hong Kong, Taiwan or Tibet were to some extent separate from mainland China, a position that Beijing rejects.

People’s Daily, the official mouthpiece of the Chinese Communist Party, published a strongly worded commentary on Aug. 12 about foreign companies that allow any of their products or websites to suggest that Taiwan or Hong Kong are not part of mainland China. It warned that an apology is not enough in these cases, as more punishment is required.

Keith Bradsher started covering Sino-American trade issues for The New York Times in 1991 and is now the Shanghai bureau chief. Follow him on Twitter: @KeithBradsher.