Home » Crypto » Bitcoin Held a Pivotal Support During Its $1,500 Correction

Bitcoin underwent a swift drop on Monday morning on news of a successful vaccine trial. The leading cryptocurrency was largely reacting to the U.S. dollar index, which moved higher seemingly because a vaccine would mean less stimulus would be necessary moving forward. The stock market also jumped higher because it meant that U.S. businesses may be able to return to normal sooner rather than later.

Some think that this is the start of an extended move lower for Bitcoin, especially seeing that gold shed 5%.

But key technical analysis shows that Bitcoin held a level of importance during this move lower.

As noted by the analyst seen below, Bitcoin held a pivotal price level during its correction earlier today. The chart shows that the cryptocurrency held an uptrend/upward diagonal formed at the start of the rally on Election Day:

“$BTC is holding the diag for now. Can we have some meme ascending triangle? Lose this diag and 1h ema200 and I’ll start worrying.” 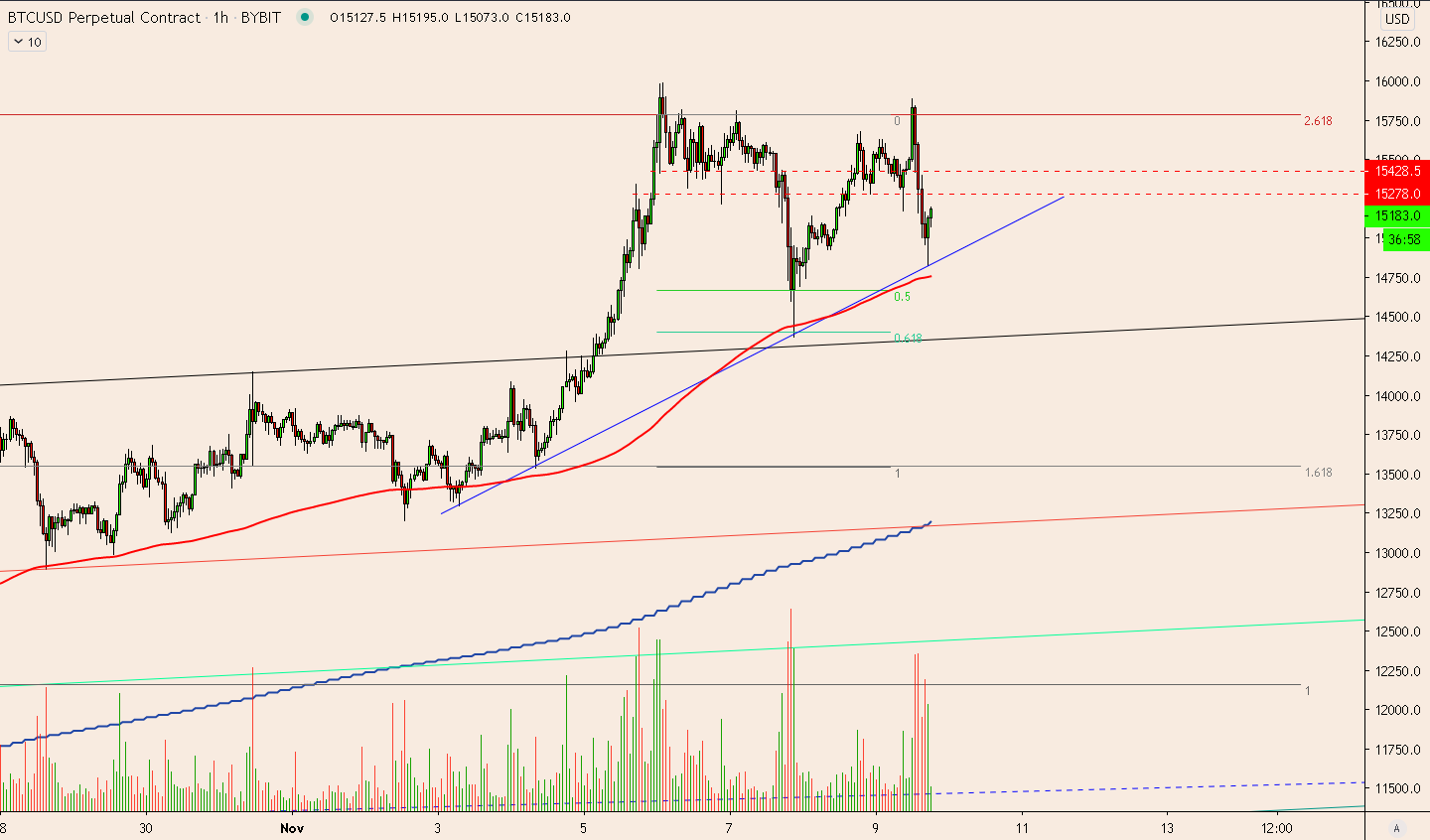 Chart of BTC’s price action over the past few weeks with analysis by crypto trader Crypto Krillin.
Source: BTCUSD from TradingView.com

The same trader added that gold is clearly overextended to the downside. His thesis is that the vaccine news should have been somewhat priced in, meaning that the U.S. dollar may revert back lower to boost gold and Bitcoin:

“I think markets overreacted to the vaccine news. Gold should give at least a bounce here. DXY is pumping hard because of EURUSD. But EURUSD was at resistance, I think the news only precipitated the dump. No reason to panic, even @nouriel thinks BTC can be a store of value now!”

The fundamentals of the Bitcoin market are also intact, giving credence to the sentiment that the market will resume its ascent higher.

On-chain analyst Willy Woo recently noted that from the on-chain trends he is seeing, he sees a clear trend of “smart money” accumulating Bitcoin:

“Who has been buying this rally? It’s smart money… High Net Worth Individuals. You can see the average transaction value between investors taking a big jump upwards. OTC desks are seeing this too. Bitcoin is still in it’s stealth phase of its bull run.”

This uptick of investment in Bitcoin is likely related to macroeconomic trends, such as the mass money printing and the adoption of CBDCs.

JP Morgan recently reported that they see inflows in the BItcoin market as a likely sign that it is being used as an alternative to gold.

Who has been buying this rally? It’s smart money… High Net Worth Individuals. You can see the average transaction value between investors taking a big jump upwards. OTC desks are seeing this too.

Bitcoin is still in it’s stealth phase of its bull run. pic.twitter.com/3q41pmNVP9