“Twitter-scale apps on ethereum” claims a team of VC funded eth developers that have been running Solidity coding lessons when not working on their game dapps or how to scale them.

This coming March, they are to showcase a dapp that runs on its own blockchain (dappchain) while connected to the ethereum network, so potentially solving the scalability problem for at least some projects, while providing an important piece of the puzzle for the entire network.

One dapp, one dappchain, they say. Allowing CryptoKitties, Etherdelta, Leroy-Twitter, or any other dapp, to handle millions of transactions, potentially fully free, with verifications virtually instant, while also connected to ethereum’s main-net.

They plan to do so by utilizing sidechains, a method that connects blockchains described as far back as 2014. One way to understand them is, instead of scaling vertically by having bigger blocks on ethereum or sharding ethereum’s chain, you scale horizontally by having many chains that “speak” to each other.

These other chains can have their own rules which do not affect ethereum’s rules. So they could be running on delegated proof of stake or even on proof of authority. They can be permissioned or permissionless, centralized or decentralized, and so on.

That could mean an ethereum based tweet on say Leroy does not have to pay the same amount of gas, nor be backed by the same level of security, as a one million dollars worth of eth transaction, with the dapp having its own nodes.

And more importantly it could mean kitties can get off to their own chain and do whatever they like there rather than creating a mess on ethereum’s blockchain clogging it up. Yet, all still connected to eth. 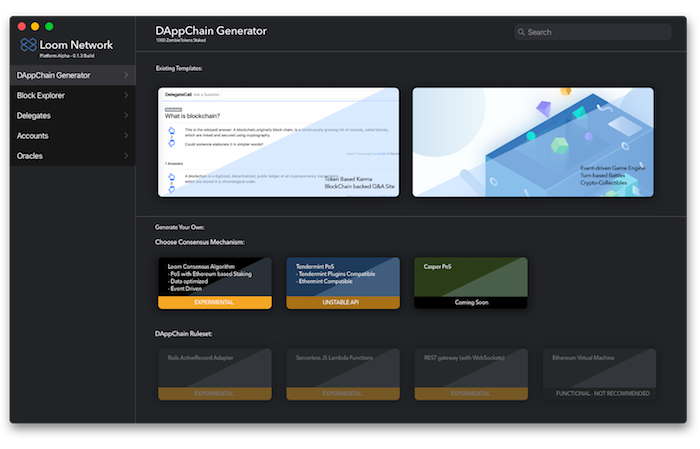 The benefits of sidechains have long been know, just as it has long been known they have one problem. Connecting chains to the main-net through what is called a two way peg in a trustless way is difficult, if at all possible.

But ethereum has smart contracts which might allow Matthew Campbell, co-founder of the team behind Dappchains, Loom Network, to at least partially solve the problem, telling Trustnodes:

“We are going to allow transfer of assets like ERC721 (cryptokitties style non fungibles) and ERC20 tokens between side chains and main chain. We have a product coming out next month that illustrates this process.”

You don’t have to transfer assets, like in-game goods, between mainnet and the dappchain itself, although you can if you wish to, but “you could have a game where all the assets live on the dappchain,” Campbell says.

You could do the same for tokens, but then they wouldn’t be pegged. So with something like CryptoKitties, it’s running on it’s own blockchain (dappchain), how is it connected to eth or why connect it at all? – we asked.

“You can transfer your kitties or mirror your kitties onto the sidechain,” Campbell said. “The kitties could battle Pokémon style with other players offchain. They could level up off chain and potentially be transferred back to mainnet.”

What Loom seems to be describing is a solution to the interoperability problem (connecting blockchains) which in the process solves some aspects of scalability. They say:

“With a DAppChain… running a node gives its users a full copy of all the data since the DAppChain’s Genesis Block.

This shareable and public data also allows for further innovation and the surfacing of entirely new concepts, such as two games sharing the same state.

Developers could release a new game that uses character data from another game world stored on a DAppChain. That way, new users of the game could immediately jump into a new world with their existing characters and assets (essentially airdropping your old game’s data to the new game).”

We all know what would actually happen is silly cryptokitties running around on twitter, but this ability to connect different games or assets would be an innovation. 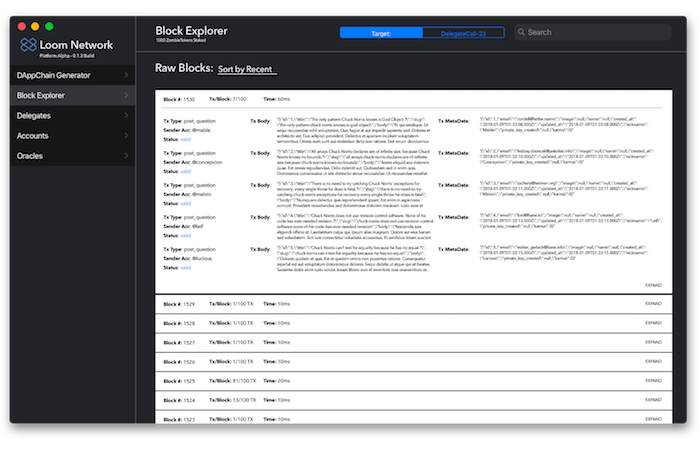 As it has not yet launched, we can’t quite see how it would actually work, nor do we have the benefit of expert code analysis, but Campbell says:

“In March we are going to launch our own commerical dApp on the platform… you’ll see the transfer function with launch of our demo app next month.”

It therefore appears to be sort of finished as can be seen by the screenshots from dappchain. What further little glimpse we could have was from their github, but much of it is set to private for now.

It will all be public and open source in March, Campbell says, at which point they will start onboarding developers.

“There will be no pre-ICO, no ICO, no post-ICO, no pre-sale,” Loom says. “We are funded quite well,” Campbell says, with their website showing The Ventures and TechStars NYC.

“We are going to build major apps we monetize and then have others use our platform,” Campbell says without revealing much more about their monetization strategy.

Dappchains is just one of many products working on scalability. How is it different from Plasma, we asked?

“A DAppchain is a real blockchain oriented for things like games that can be self contained and be forked. Plasma is just temporary states of the ethereum mainnet that can be used for transactions between two parties,” Campbell says.

That forking aspect is important because Loom argues even if a dappchain has lower security, or developers of a project within it take a decision users don’t like, they can just fork it and move ahead as if nothing happened.

Making them, in effect, not much different than ethereum, but while eth handles billions, giving the smartest in the world great incentives to hack it or attack it, a silly ethmon (pokemon) game barely needs 1/1000th eth’s security.

And if they do, they have the choice, since they can choose whatever consensus parameters they like. But the crucial aspect will be that smart contract escrow which allows for the transfer of assets or tokens between the chains.

As it is a smart contract, it will necessarily be public, but whether the devs of that smart contract are a trusted intermediary or otherwise remains to be seen. Nor is it clear whether that would matter if you can just fork or copy paste the smart contract code.

So we might be due in for a world of not just one blockchain, but millions of blockchains, all talking to each other, and all revolving around ethereum.

And all this might begin not in two years, but next month, as time once more accelerates in this space, with scalability potentially solved, at least for some projects.