“Technological developments now mean that it is not merely the reader’s eyeballs that have value to our site — it’s also your computer’s ability to make calculations, too. Indeed, your computer itself can help support our ability to pay our editors and journalists.”

So says Salon, a left leaning online only news-site with millions of monthly viewers that has been operating online since 1995, yet often at a loss.

“Like most media companies, Salon pays its bills through advertising and we profoundly appreciate our advertising partners and sponsors,” the news-site says, but complains “print dollars become digital dimes become mobile pennies.”

In a first, they are now testing using your computer resources to mine a crypto, probably monero, while you are on their website.

And unlike other stories where websites were so unwittingly doing, Salon has consciously and willingly decided to offer you the option of reading them for free in return for your computing power.

“The demand for computing power across many different industries and applications is potentially very high. We intend to use a small percentage of your spare processing power to contribute to the advancement of technological discovery, evolution and innovation…

We’ll start by applying your processing power to help support the evolution and growth of blockchain technology and cryptocurrencies,” Salon says.

Users can choose whether to turn off the adblocker and see ads, or to mine crypto and see no ads, with the mining process being in operation only as long as they are on Salon.

Reader’s computers are not affected in any way except for the use of the CPU computing resources. Salon doesn’t write anything on their computer and their privacy is preserved, but as shown by the FAQ, readers might notice an uptick in noise caused by the computer fan.

That’s because CPU mining is an intensive process which creates heat so making fans run at full speed which translates to noise.

Even for fanless computers, like Macs, the high computer processing demand creates very audible noise, allowing you to easily tell if the crypto miner is running or not. 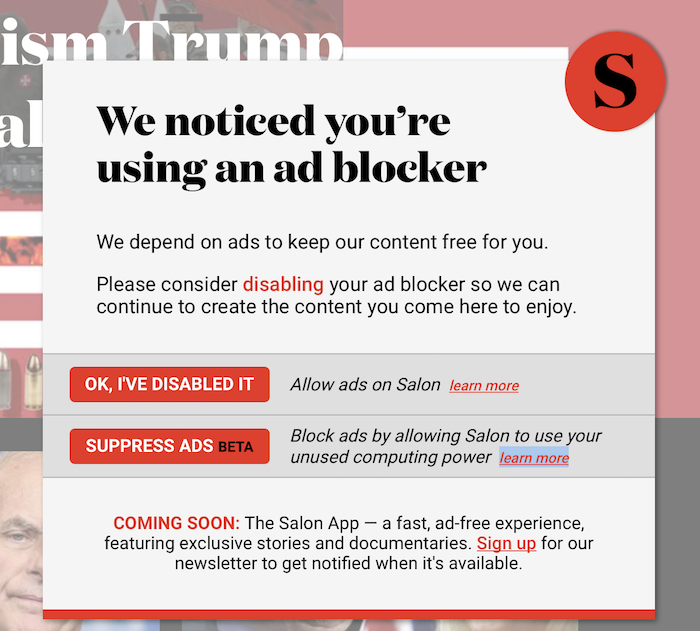 We do not know what crypto miner they are using exactly, but we have covered one of them before, Coinhive, which “offers a JavaScript miner for the Monero Blockchain that you can embed in your website.”

Our initial estimate was any earnings would be in the pennies, and not worth the inconvenience. But the fourth estate is in an experimenting flux caused primarily due to careless advertisers.

We have all seen those flashing banners that almost prohibit you from reading the content. That led to increasing incentives for blocking software, with adblockers up and up. Which in turn has led to losses in the news industry, an industry that is now trying to play cat and mouse while experimenting around.

But ultimately an understanding has to arise between readers, publishers and advertisers. Readers need to be aware finding news, sourcing it, collecting it and compiling it does cost quite a bit, and someone has to pay for those costs. While advertisers need to be aware readers are humans and would very much rather not be in effect prevented from reading the content by super annoying ads.

Such understanding was natural in print because images can not move there, but online the distracting ability of movement has been exploited fully, leading to a readers’ backlash.

So in effect reducing papers to heating up your computer, or perhaps even worse, to outright begging like the Guardian does, humiliating themselves.

Neither of the left leaning papers gives their readers the option to just pay for it and thus not have to be inconvenienced by begging nags or your computer potentially crashing, while right leaning papers, and New York Times, have been more forthcoming to implicitly declare communism doesn’t work (as in free for all) and thus someone has to pay for it, with that someone being, in part, the readers.

But this space does have plenty of room for innovation, including a start-up that sources movement-free advertisers as well as Netflix like services for news-sites.

Yet, in that endless quest for better in an ever changing world, whatever option is presented will perhaps always fall short as experimentation continues.