Investing on the Australian Securities Exchange over the past 12 months has either been wonderful or bewildering. 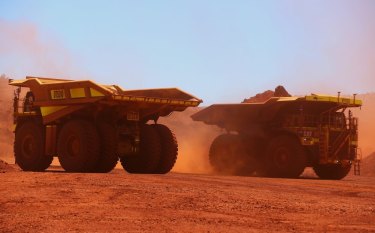 Iron ore miner Fortescue Metals was one of the best-performing stocks on the Australian Securities Exchange over the past year, with gains of more than 170 per cent.Credit:Bloomberg

If that is not what you have heard, it’s probably because that benchmark includes dividends. The index itself, which is most often reported but measures only prices, is up 7.6 per cent.

That’s still a pretty good year. On average, stocks in developed world markets, including Australia, tend to rise about 9 per cent to 10 per cent per annum.

While it is somewhat true that a rising tide tends to lift all boats, some ASX watercraft have done better than others – which, as I said at the top, is either wonderful or worrying news.

Of the top 15 ASX 200 performers since early October of last year, six are technology companies (including fintech and biotech). Another half a dozen are predominantly gold miners.

So, in short, to be ultra successful over the past 12 months, you would have needed to be one of the more unusual investors out there, with an equal interest in old-school hole digging and cutting-edge technology.

The silver medal went to online lotteries innovator Jumbo Interactive, while the last spot on the podium was claimed by one of the great Australian success stories of the past 15 years, Fortescue Metals. (Jumbo jumped 248 per cent, while Fortescue gained 174 per cent).

Unless you owned many of those stocks, looking in the rear-vision mirror is not going to help you much now. What matters is what happens from here – and that’s where things get difficult.

There is no clear and obvious lesson from the list of companies that currently top the charts.

If you are a believer in economic Armageddon, you will tell me the price of gold will continue to rise.

Maybe, but that’s a gutsy bet.

If you have made a motza from the fast-expanding price-earnings multiples of technology stocks, you will likely expect that to continue well into 2020 and beyond.

However, if you are someone who – more boringly, but often correctly – believes in what the boffins call "mean reversion", you will avoid those sectors like the plague.

Mean reversion suggests that share prices tend to move back to their long-term averages. So, when share prices are high, you might expect a pullback. And, when they are low, the contrarian is waiting for them to recover.

In all likelihood, it will be neither… and both.

The long-term performance of gold does not exactly promise huge ongoing gains. And, as the recently failed WeWork initial public offering shows, markets are not too willing to pay nose-bleed prices for technology companies forever.

In short, what got us here likely won’t get us there.

However, I’m not throwing my entire lot in with the mean-reversion crowd, either.

Some of the tech innovators truly are inventing new products, new services and entirely new industries. There will be winners and losers but the winners will likely continue to make money for their shareholders.

In summary, be careful with the high flyers.

As Warren Buffett reminds us, we pay a high price for a cheery consensus.

At least some of the next year’s winners are likely to come from the bottom of this year’s pile.

Quality and value – together – are your best guide for success.