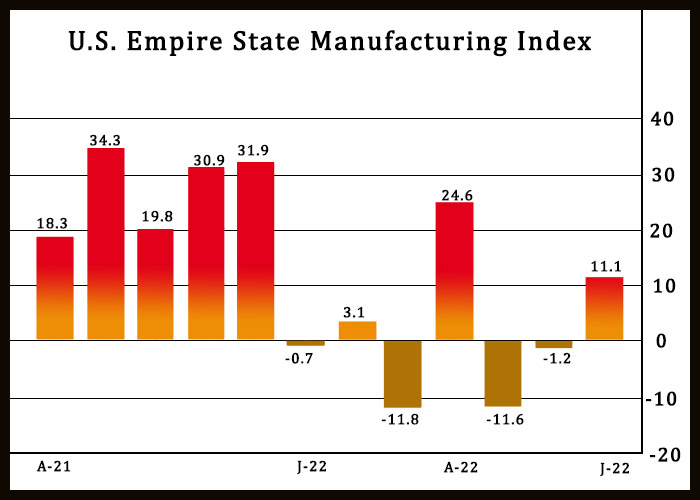 A report released by the Federal Reserve Bank of New York on Friday unexpectedly showed growth in regional manufacturing activity in the month of July.

The New York Fed said its general business conditions index jumped to a positive 11.1 in July from a negative 1.2 in June, with a positive reading indicating growth in regional manufacturing activity. The increase surprised economists, who had expected the index to edge down to a negative 2.0.

The unexpected surge by the headline index reflected a substantial acceleration in the pace of growth in shipments, with the shipments index spiking to 25.3 in July from 4.0 in June.

The report also showed a modest acceleration in the pace of growth in new orders, as the new orders index inched up to 6.2 in July from 5.3 in June.

The New Fed also said delivery times lengthened at the slowest pace in months, with the delivery time index falling to 8.7 in July from 14.5 in June.

Prices also increased at a slower rate compared to the previous month, as the prices paid index tumbled to 64.3 from 78.6 and the prices received index slumped to 31.3 from 43.6.

Meanwhile, the report showed a modest slowdown in the pace of job growth, with the number of employees index edged down to 18.0 in July from 19.0 in June.

The New York Fed also said firms turned pessimistic about the six-month outlook, calling the move a rare occurrence in the survey’s history.

The index for future business conditions plunged to a negative 6.2 in July from a positive 14.0 in June, indicating firms expect activity to decline over the next six months for only the fourth time in the survey’s history.

“Manufacturing activity will settle into a slower growth trajectory in the months ahead,” said Oren Klachkin, Lead U.S. Economist at Oxford Economics. “Normalizing spending patterns were already slowing factory output, and elevated prices and higher interest rates will cause some demand destruction.”

“The economy‘s underlying resiliency will mitigate these challenges but weaker growth of new orders and a diminishing backlog of unfilled orders show these challenges are taking a toll,” he added. “Recession isn’t inevitable but risks are running high.”

Next Thursday, the Philadelphia Federal Reserve is scheduled to release its report on regional manufacturing activity in the month of July.