While the moderate Democrats finished behind Bernie Sanders in New Hampshire, fellow 2020 presidential hopefuls Amy Klobuchar, Pete Buttigieg and Joe Biden are winning over the CEOs of S&P 500 companies, as top executives cast votes with their wallets.

Sanders, the independent senator from Vermont who is now leading in national polls, hasn’t attracted any donations from chief executive officers of S&P components. Neither has his fellow progressive White House hopeful, Sen. Elizabeth Warren of Massachusetts.

Instead, seven bosses have given their own money to the presidential campaign of Sen. Klobuchar of Minnesota, while former South Bend, Ind., Mayor Buttigieg also has drawn contributions from seven S&P CEOs.

Five have supported former Vice President Biden’s campaign. That’s shown in the chart below and based on a MarketWatch analysis of Federal Election Commission data on individual contributions made in 2019 to a candidate’s principal presidential campaign committee, as reported for a Jan. 31 filing deadline.

The lack of S&P CEO giving to Sanders and Warren makes sense to Bruce Freed, president of the Center for Political Accountability, a nonprofit that pushes for better disclosure of corporate political activity.

“I’m not surprised that there are no CEOs for Warren or Sanders, because they have been attacking the conduct of companies, and they’ve been calling for major structural change,” Freed said.

“On the other side, those candidates don’t want that money because they have been using that to attack their opponents,” Freed added. “Just take a look at the attacks on Buttigieg, [with Sanders supporters] calling him ‘Wall Street Pete’ because he’s taken some Wall Street money.”

Related: What ‘Medicare for All’ would do to the health-care sector 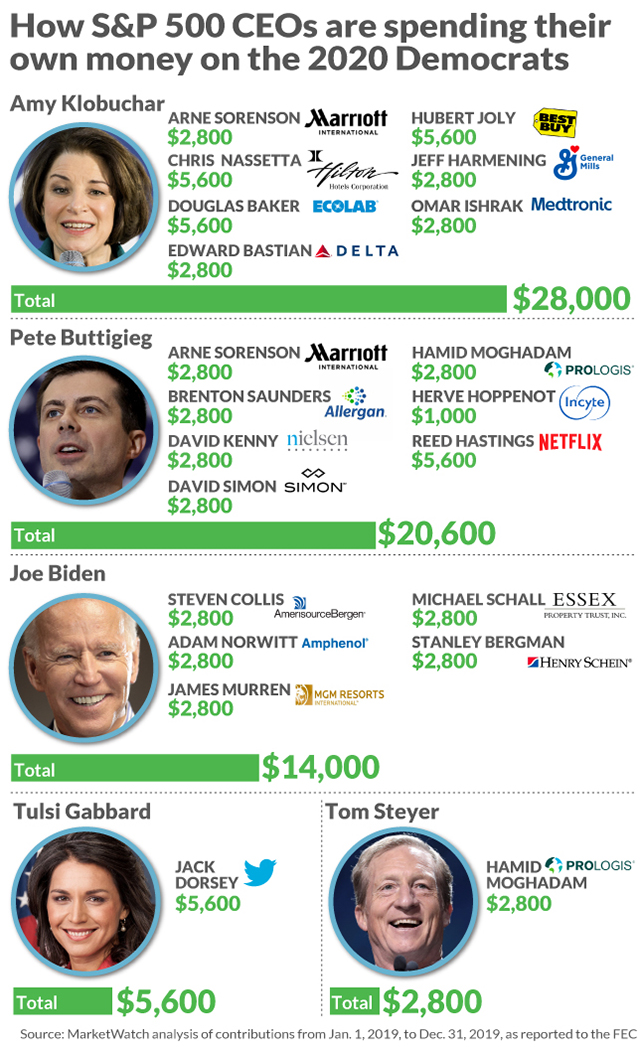 Most of the CEOs have donated $2,800, as that’s the maximum that an individual can give to a candidate in an election. But a few execs have donated $5,600, as donors are allowed to shell out $2,800 for the primary election and $2,800 for the general election. Candidates who don’t advance beyond the primary must then refund, redesignate or reattribute any donations received for the general election, according to FEC rules.

Related: These are the basics of campaign finance in 2020 — in two handy charts

And see: What Democrats can do with money left over from failed presidential runs

The donations in a half-dozen instances show S&PSPX, -0.16%CEOs supporting top politicians in their companies’ home states. Such contributions are at least in part about maintaining a relationship, observed the Center for Political Accountability’s Freed.

Klobuchar, Minnesota’s senior senator, received donations from four execs at companies that have headquarters in Minnesota — Ecolab Inc.’sECL, +0.12%Doug Baker, General Mills Inc.’sGIS, +0.11%Jeff Harmening, Best Buy Co.’sBBY, -0.58%Hubert Joly (who stepped down as CEO in June) and Medtronic PLC’sMDT, +0.29%Omar Ishrak. In Medtronic’s case, the maker of medical devices has its operational base in Minnesota, but its legal headquarters is in Ireland.

Opinion: Multinationals may have to bid farewell to the Irish tax haven they’ve known

Buttigieg, the former mayor of Indiana’s fourth-largest city, drew a donation from the head honcho at Indiana-based Simon Property Group Inc.SPG, +1.16% , David Simon. Biden, a longtime Delaware senator before he joined the Barack Obama 2008 presidential ticket, received a contribution from CEO Steven Collis of AmerisourceBergen Corp.ABC, -0.88% , which is based in Pennsylvania, the state where Biden was born and has his campaign headquarters.

Related: Here are the 8 Democrats running for president after Yang, Bennet, Patrick drop out

Buttigieg also got a contribution from Marriott’s boss.

In fundraising overall, as of Dec. 31, Sanders has been leading the Democratic field when it comes to receiving money from supporters, raking in $96 million. But billionaire company founders Michael Bloomberg and Tom Steyer are well ahead of their fellow 2020 Democrats in spending, fueled by Bloomberg’s giving $200 million of his own money to his self-funded campaign and Steyer contributing $202 million to his.

“Unlike other candidates, Bernie doesn’t take money from rich corporate CEOs, doesn’t bend his policy proposals to their will and will never carry their water as president,” said the Sanders campaign’s national policy director and senior adviser, Josh Orton, in a statement. “In a Sanders administration, working families will finally have a president they can trust to deliver the progressive change we desperately need.”

Biden’s campaign declined to comment, and Buttigieg’s, Klobuchar’s and Warren’s teams didn’t respond to requests for comment. A Biden spokesman last year stressed that the former vice president’s 2020 effort was “powered by hundreds of thousands of grassroots supporters who are backing him,” when the campaign was asked how voters should think about CEO support.

On the Republican side of the White House race, five S&P 500 CEOs have given their own money to President Donald Trump’s principal campaign committee.

Their companies didn’t respond to requests for comment, nor did Trump’s campaign.