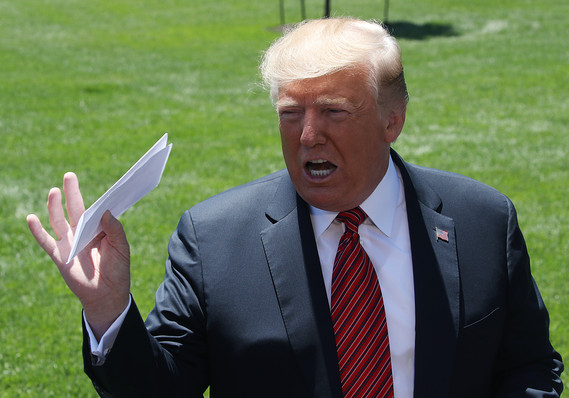 President Donald Trump unloaded on Joe Biden as both were visiting Iowa on Tuesday, offering a preview of general-election arguments he’ll make if the former vice president secures his party’s presidential nomination.

With Biden preparing to dub Trump an “existential threat to America” in remarks in Davenport, Iowa, Trump told reporters the ex-vice president is his preferred opponent in next year’s election.

“I’d rather run against, I think, Biden than anybody,” Trump said on the South Lawn of the White House as he prepared to depart for the Hawkeye State. “I think he’s the weakest mentally and I think Joe is weak mentally. The others have much more energy.”

Biden leads the wide field of Democratic hopefuls for the party’s nomination, and Trump has previously attacked him. But Tuesday’s barbs come as Trump visits Iowa — which holds the first presidential caucuses — for the first time this year. Trump’s schedule includes a visit to a renewable-energy facility in Council Bluffs and a speech to a state Republican Party dinner.

Now read: As Biden commands lead in polls, these are the Democrats who are running for president.

On Twitter, Trump complained that the Fed was keeping interest rates “way too high,” as he shared a Bloomberg opinion article that argued the low cost of traveling in Europe has led to too many tourists.

“This is because the Euro EURUSD, +0.2122%  and other currencies are devalued against the dollar, DXY, -0.12%  putting the U.S. at a big disadvantage. The Fed Interest rate way too high, added to ridiculous quantitative tightening! They don’t have a clue!” Trump said.

Trump’s latest Fed criticism came as central bank policy makers are preparing to meet next week in Washington. The president has taken frequent shots at the Fed for raising interest rates, something it did four times last year. On Monday, the president told CNBC the central bank was “very disruptive.”

Now see: Get out the scissors — Barclays forecasts a half-point rate cut from the Fed in July.

Days after announcing he wouldn’t go through with tariffs on Mexican goods, Trump also defended his threat to use levies, calling them a “great negotiating tool.” In a pair of tweets he used the first names of Fox Business hosts including Stuart Varney and Maria Bartiromo, after they discussed tariffs and trade wars in a way he evidently did not like.

“Maria, Dagan, Steve, Stuart V – When you are the big “piggy bank” that other countries have been ripping off for years (to a level that is not to be believed), Tariffs are a great negotiating tool, a great revenue producers and, most importantly, a powerful way to get …Companies to come to the U.S.A and to get companies that have left us for other lands to come back home,” Trump said.

Trump also told reporters he’d gotten a “beautiful” letter from North Korean leader Kim Jong Un and that another summit could happen soon. National Security Adviser John Bolton earlier told a Wall Street Journal conference that such a meeting was “entirely possible” and “we’re ready when they are.”

Separately Trump said he was considering giving asylum to Venezuelans. The White House opposes the regime of Nicolas Maduro and has recognized opposition leader Juan Guaido as Venezuela’s president.

Sign up for Trump Today and other MarketWatch newsletters.