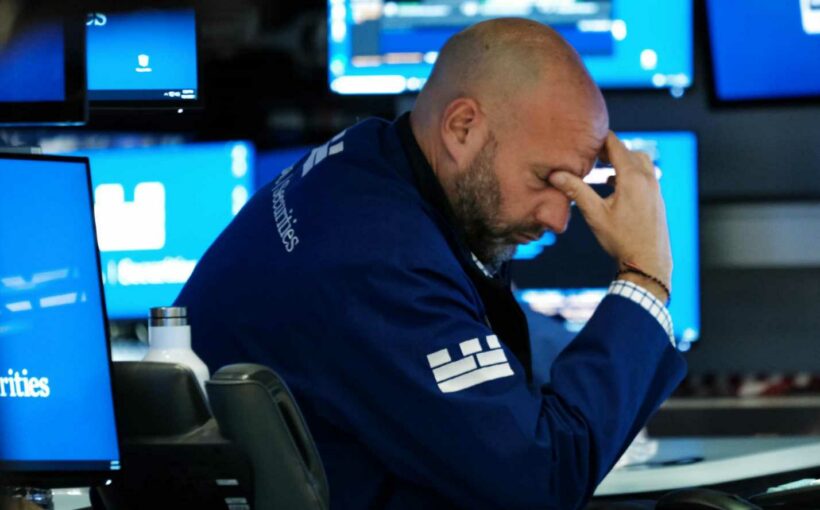 Dow futures dropped 300 points, or nearly 1%, on Wednesday as October has so far lived up to its reputation for extreme volatility. S&P 500 and Nasdaq futures each fell more than 1% in premarket trading. On Tuesday, the Dow Jones Industrial Average, S&P 500 and Nasdaq all soared roughly 1% in a rebound from the prior session's slide. On Friday, Wall Street started the new month, after a rough September, with a strong rally. Many market strategists pointed out that even though October can be tricky, the fourth quarter has historically been a mostly strong period for stocks. The Nasdaq was 6% away from its Sept. 7 record close. The S&P 500 was 4.2% from from its Sept. 2 record close. The Dow was 3.7% away from its Aug. 16.

Rising bond yields on Wednesday were pressuring tech stocks, with Apple, Microsoft and Amazon all falling around 1% each in the premarket. The 10-year Treasury yield topped 1.5% after the first of three key jobs reports this week. Before the opening bell Wednesday, ADP reported the private sector created 568,000 new jobs in September. U.S. companies shook off worries over the Covid delta variant and hired at a faster-than-expected pace last month. The Labor Department issues weekly jobless claims Thursday morning, one day before the big September employment report.

U.S. oil prices on Wednesday pulled back modestly from near seven-year highs, on track to break a four-session winning streak. West Texas Intermediate crude, however, gained 1.7% on Tuesday, settling at $78.93 per barrel after hitting a session high of almost $80. WTI has gained nearly 65% in 2021, adding price pressures in the U.S. at a time when the Federal Reserve is trying to gauge the staying power of higher inflation as policymakers consider whether to start reducing extraordinary Covid-era monetary stimulus measures.

4. Biden concedes $3.5 trillion budget bill will need to be smaller

President Joe Biden has conceded the final version of a $3.5 trillion package of social and environmental initiatives with only Democratic support will have to be considerably smaller. In virtual meetings with House Democrats this week, Biden said he reluctantly sees a price tag between $1.9 trillion and $2.3 trillion, a Democrat familiar with the sessions said Tuesday. Sen. Joe Manchin, a high-profile Democratic holdout, wants a bill closer to $1.5 trillion. For passage, Democrats need every vote in the 50-50 Senate and all but three in the House.

Biden said Democrats are considering a change to the Senate's filibuster rules in order to quickly pass a debt ceiling increase needed avoid a devastating credit default. The deadline set by the Treasury Department is Oct. 18. Getting rid of the filibuster would lower the typical 60-vote threshold for passage to 50. With Vice President Kamala Harris breaking any tie, a simple majority would be enough for passage. Republicans want Democrats to utilize the reconciliation process they aim to use for the budget bill, to act on the debt ceiling.

— The Associated Press and Reuters contributed to this report. Follow all the market action like a pro on CNBC Pro. Get the latest on the pandemic with CNBC's coronavirus coverage.