Home » Markets » A chief market strategist shares 4 must-see charts that forecast the next big moves in stocks, bonds, and gold — and 6 trades set to surge on what happens next 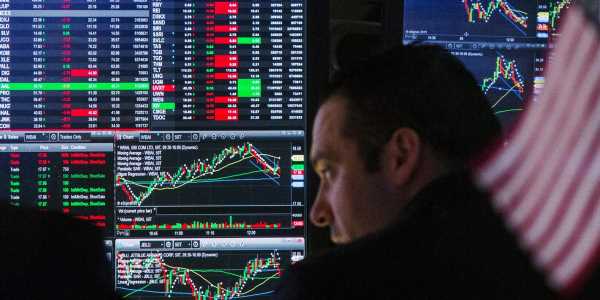 Will 10-year Treasury yields continue to rise? By how much? Is the market in a bubble that’s due to burst? What’s in the cards for gold as inflation expectations rise?

These are some of the questions investors have been grappling with in recent weeks as the market beings to anticipate a robust and speedy economic recovery.

But they’re difficult questions to answer. No one knows for certain what asset prices will do in the future.

One way to anticipate future movements with a higher degree of certainty, however, is through technical analysis. Though fundamentals (like revenue and profits) and macro factors (like job and wage growth) can affect what will happen to an asset’s worth, looking at past price patterns is also a way to identify what might happen next.

David Keller is the chief market strategist at Stockcharts.com and an expert at technical analysis. We asked him what charts investors should be looking at now, and what they are indicating assets might do going forward.

He shared four with us, which are listed below. 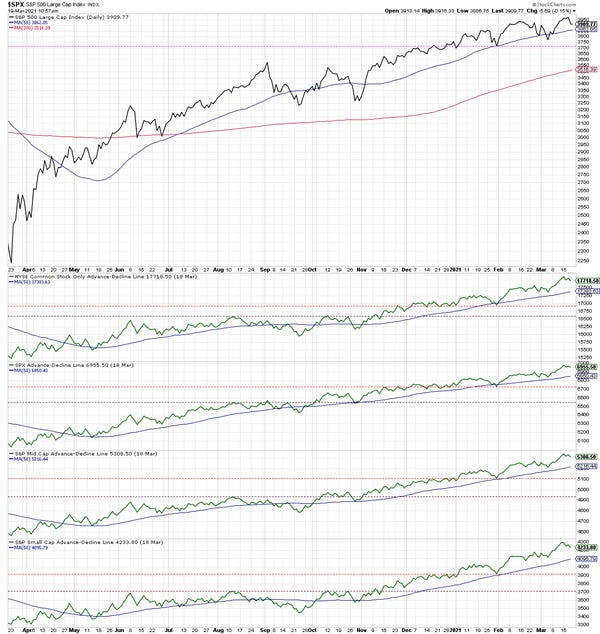 Many investors are concerned about a bubble in equities. This chart shows that in the near term, that’s not the case, Keller said.

This is because market breadth is strong. Advance-decline lines of indexes for NYSE Common Stocks and S&P 500 small-caps, mid-caps, and large-caps are all moving higher and are above their 50-day moving averages, meaning a large percentage of stocks in them are participating in gains, Keller said.

“In general, a healthy market means the index is going higher and these advance-decline lines are going higher, because it tells you that overall it’s broad participation,” Keller told Insider on Wednesday. “It feels like valuations are very high and we’ve had a run, these measures of breadth tell you it’s not that bad.”

He credited the rotation into cyclical sectors like financials and energy for the breadth. 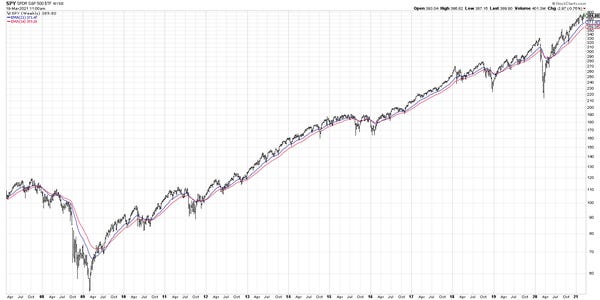 After a historic run-up in 2020, how will stocks behave this year? With indexes near all-time highs, is there still room to run?

The short answer is yes, Keller said. However, he anticipates that 2021 will be a choppy year for stocks.

He pointed to 2010 as an example year. After stocks had an explosive rally in 2009, they became more volatile in 2010, re-touching their 21- and 34-week exponential moving averages, though they still finished higher at year-end. The chart above shows that stocks took a similar path in 2020 as they did in 2009, meaning they could behave this year like they did in 2010.

So, even though Keller is bullish on the near-term prospects for stocks, he anticipates that some sort of breakdown in breadth will occur in the months ahead, especially with heightened bullishness, leading to volatility.

The sectors whose charts “setting up the best right now,” and which he expects to do best as the economy gains steam, are industrials and financials.

Where 10-year Treasury yields could go 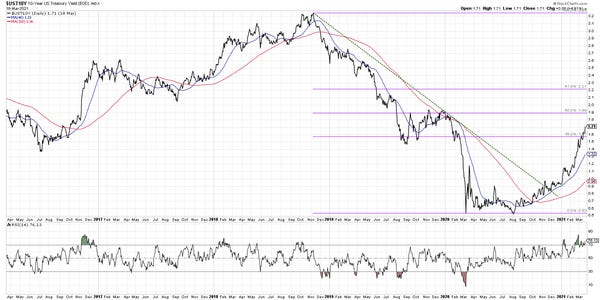 Yields of 10-year Treasury notes have been the story on Wall Street over the last few weeks, crossing 1.7% percent for the first time since the pandemic began in the US.

The move has caused some investors to start to shift out of longer-duration growth stocks like large-cap tech sending them tumbling.

So how high will rates go? According to Keller’s analysis, they’re on their way to 1.9% in the nearer-future, and should go 2.2% by the end of the year, according to his analysis using Fibonacci levels from the bottom of last year’s drop in yields.

“We’ve retraced 38.2% of that sell-off. That’s a key Fibonacci level. And when yields start to come higher and when bonds start to sell off, that’s where you immediately look at that first objective. We’ve now reached it,” he said. “I wouldn’t be surprised if we chop around these levels for a little bit because again it’s a pretty meaningful resistance level. But then you go to the next one which is around 1.9%.”

Keller said he expects yields to go to 2.2%, or the 61.8% Fibonacci level, by the end of this year because of support from the economic recovery.

How gold prices could behave 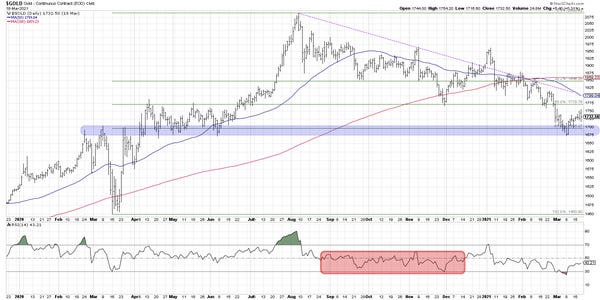 Gold prices have been falling since August of last year. But some investors have said that it will rebound with inflation expected to pick up in the coming months.

That isn’t likely to happen very soon, at least judging from Keller’s analysis.

He said even though it’s hit the 61.8% Fibonacci support level, it has been on a downtrend and hasn’t shown signs of turning around by surpassing previous highs.

“Essentially, for most of the last eight months it’s been a pattern of lower highs and lower lows. It just keeps pounding lower and really doesn’t eclipse the previous highs when there’s a rally afterwards. And that’s just the definition of a downtrend,” Keller said.

He continued: “So we’ve bounced off of this 61.8% retracement level. That’s great. But we haven’t made any sort of high or low — we’d have to get above some of these previous highs, which is up at 1,800 or so, to really signal a return back to an uptrend.”

Get the latest Gold price here.