Tax advice, fringe benefit tax relief and rent relief stumped up by taxpayers mightn’t sound as shocking or sexy as four Cartier watches gifted to staff at Australia Post, but it is.

The shocking revelation on Friday that the chairman of the Australian Securities and Investments Commission (ASIC) charged taxpayers almost $120,000 to cover his tax affairs dwarfs the $12,000 cost of the watches and it casts a cloud over the inner workings of the corporate regulator.

It resulted in ASIC chairman James Shipton standing down while an investigation takes place into how and why the regulator ended up paying such a huge amount for Shipton's relocation expenses that included $118,557 in tax advice paid to KPMG and an additional $78,266 in Fringe Benefits Tax in relation to these benefits. 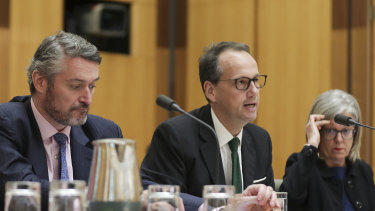 Daniel Crennan and James Shipton from the Australian Securities and Investments Commission.Credit:Alex Ellinghausen

It’s a lot of money that included tax advice on Shipton’s personal investments, "optimisation of the Australian taxation of foreign exchange gain or loss in foreign bank accounts" and "assistance in respect of resolution of Massachusetts State tax notices and penalties due to late filing of 2017 Massachusetts state tax return".

It isn’t a good look particularly given ASIC approved an engagement letter from KPMG for the provision of taxation services to the incoming chair with costings of $4050.

Nor is the $69,621 in housing costs ASIC forked out to ASIC’s deputy commissioner Daniel Crennan, who hasn't been stood down, in relocation costs when he joined the regulator in July 2018. The rent relief of approximately $750 a week continued until very recently.

Shipton and Crennan exceeded the agreed remuneration limits. Both have agreed to repay the amounts but the damage is already done.

ASIC is the corporate regulator and needs to be above reproach.

At a basic level it means the regulator has lost its leader for two months while an investigation is conducted. But optics-wise it reflects poorly on their judgment and raises questions about the culture and structure of ASIC as to why it didn’t pick up the issue itself and even when it was picked up externally, why it didn't do something about it sooner.

When it was told a year ago it did nothing.

ASIC waited until the Australian National Audit Office (ANAO) started making noises in September 2020 with an email to Treasurer Josh Frydenberg giving him the heads up there was an issue.

The letter was sent on October 22, the same day Australia Post boss Christine Holgate was stood down over four Cartier watches she had given to four executives for a job well done. Those revelations attracted some strong comments from Prime Minister Scott Morrison, who said he was “appalled and shocked” by the purchase. She was immediately stood down and an investigation instigated.

Shipton and his tax expenses were handled differently. Shipton was given the opportunity to stand down voluntarily at a parliamentary committee hearing on Friday afternoon. 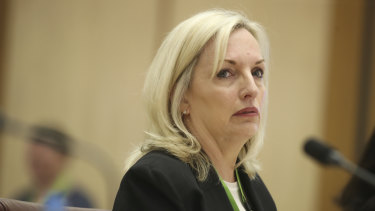 He gave a long-winded speech explaining that he had done nothing wrong, that he had paid the money back and would co-operate with an independent investigation.

Given the medicine dished out to Holgate he got off relatively easily.

But ASIC has sat on this for a year and did nothing until the Auditor-General Grant Hehir made the extraordinary decision of writing to the Treasurer.

That letter speaks volumes about ASIC’s attitude. Hehir tells Frydenberg he was writing to him because he wasn’t convinced ASIC would take the appropriate action.

“I formed a view during the course of the audit that in order to gain greater confidence that appropriate action would be taken, I should indicate that I would bring the matter to your attention,” he said in the letter.

A day later Shipton stood down.

ASIC deputy chair Karen Chester was at the parliamentary committee hearing and admitted that ASIC hadn’t deal with it quickly enough. “It is a failing and we acknowledge it,” she said.

'I formed a view during the course of the audit that in order to gain greater confidence that appropriate action would be taken, I should indicate that I would bring the matter to your attention.'

Andrew Leigh, a member of the parliamentary committee, said a year ago a media report stated that Crennan was paid more than the High Court Chief Justice, which should have raised a red flag to the government. He said they dragged their heels looking into these issues.

Leigh also asked why the inquiry would take two months. “To have the corporate watchdog leaderless for two months in the midst of a pandemic and a recession is irresponsible, and shows the government’s failure to move swiftly on investigating wrongdoing,” he said.

For years ASIC has been criticised for being too timid and too slow to act when it comes to big corporate scandals.

The Hayne royal commission found it asleep at the wheel and too compliant to those it regulated, even to the point of handing over draft press releases to those it was regulating to get their input.

It promised to be quicker to act and tougher following the royal commission.

But at the parliamentary committee hearing on Friday it didn't feel like much had changed. When a question was asked about Crown Resorts given the explosive evidence in a NSW casino inquiry including allegations of insider trading, breaches of director duties and misleading statements to the market, ASIC was silent.

Commissioner Cathie Amour said ASIC was following the inquiry and confirmed she had seen reports it was likely to make a referral to ASIC about one of the former directors. “If there is a referral we will investigate further,” she said. “That’s not to say we won’t look at the issues more generally.”

But she declined to go any further, saying it would not be appropriate to make any further comments. “I ask for your indulgence,” she said.

It was a typical blow off from ASIC. But it goes to the heart of its problem. The brutal reality is it needs to be bolder. If it was it might get more respect.

For instance, it wasn’t informed about radical changes to responsible lending laws and it was the only regulator that didn’t receive more funding in the budget. Its chairman has stood down and its deputy chairman has opted to stay.

Whatever way it wants to spin it, ASIC needs to take stock of what’s going wrong and do something.

Start the day with major stories, exclusive coverage and expert opinion from our leading business journalists delivered to your inbox. Sign up for the Herald‘s here and The Age‘s here.