On a day the yield on the 10-year German bond TMBMKDE-10Y, -2.95% hit a record low and a fund manager survey found the most bullish view on bonds in close to 11 years, it’s worth asking if the mania for fixed income that is gripping markets is justified.

The Call of the Day goes to Bloomberg columnist John Authers, who discusses whether bonds meet the four criteria for being a bubble (subscription required).

The short version is yes.

The longer version cites the opinions of Longview Economics strategist Chris Watling, employing the framework from ”Manias, Panics and Crashes,” which in defining a bubble asks whether cheap money underpins it, whether debt is taken on during the bubble-up on margin, whether the asset price has a notably expensive valuation and whether there’s a narrative to explain away the high price.

Reasons one, three and four are certainly met. The rationale for two is a little complex, but argues that major central banks, in creating bank reserves to engage in quantitative easing, have done so, as have professional investment advisers engaging in momentum strategies.

The Bank of America Merrill Lynch fund manager survey found the most bullish view on bonds since Nov. 2008. A People’s Bank of China official pledged not to devalue the yuan after being called a manipulator by the U.S. Treasury last week, while Hong Kong flights were again cancelled due to protests. Argentina will be in focus after stocks SPMERVAL, -37.93% and the Argentine peso ARSUSD, +0.116324%  were hammered on Monday after the weak showing for President Macri in the country’s primaries.

Core inflation came in stronger than anticipated in July, the latest data from the Labor Department show. The 12-month growth rate in core CPI was 2.2%, the highest level since January. 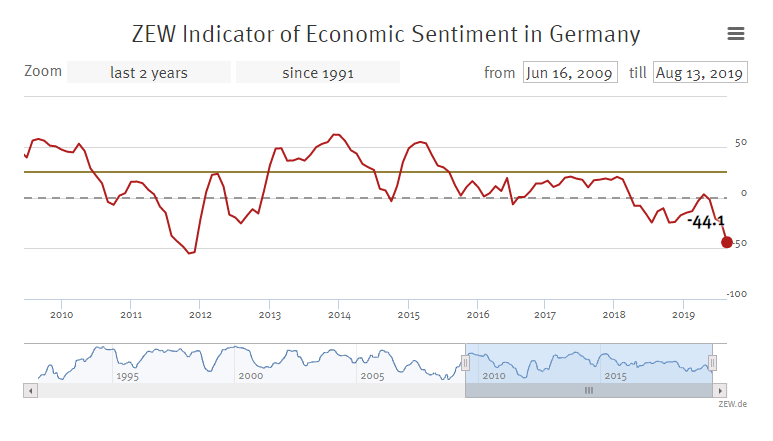 It never sounds good for an index to reach -44.1, which is what the ZEW indicator of economic sentiment in Germany did in August. That’s the poorest reading since Dec. 2011 and worse than economist expectations, and comes as the export powerhouse reels from both the U.S.-China tensions and the uncertainty gripping trading partner Britain.

Of course you want to watch kangaroos in the snow.

Carbon dioxide levels in the Earth’s atmosphere are at an 800,000 year high. (If you’re wondering how they know, it’s from analysis of cylinders of ice drilled out of an ice sheet or glacier, typically from Greenland or Antarctica.)

Need to Know starts early and is updated until the opening bell, but sign up here to get it delivered once to your email box. Be sure to check the Need to Know item. The emailed version will be sent out at about 7:30 a.m. Eastern.