Jacki Zehner, the first female trader to make partner inside Goldman Sachs Group, was sitting at her kitchen table in Utah on Thursday morning when her husband told her he had good news: "Wall Street has their first female CEO."

She was happy to hear that Jane Fraser will run Citigroup – mostly.

"To have a female at the top of a large financial institution is a step forward, but it's a baby step," she said in an interview on Thursday morning. "Acknowledging that it's never been true before, and it's true now, is something to celebrate. That being said, it doesn't mean that there's systematic change. It represents one female." 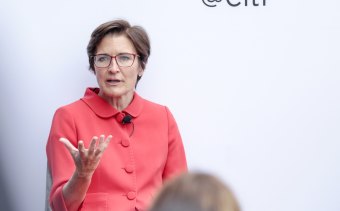 As congratulations rolled in across Wall Street for its newest boss, diversity advocates said the financial industry has a lot more to do to reach gender equality and pay equity. It's taken this long to appoint the first, and only, female chief executive officer at one of the biggest US banks, and efforts to get more women into senior management have been slow to boost representation.

The top groups of influential operating teams that oversee the six biggest US banks are dominated by men. Women make up a third or less of those groups inside all of them except JPMorgan Chase, where the gender split is even. In total, there are two men for every woman who sit in those powerful Wall Street spots.

One of those women, Catherine Bessant, the top technology executive at Bank of America, called the promotion "great news for the company and for women everywhere," on Twitter, writing that it was "a big and fantastic moment."

Last year, when a group of white, male bank bosses testified before a House committee, Representative Al Green asked if they thought their successors would look any different than them. None raised a hand.

Green was encouraged by the news of Fraser's appointment. "This was something that uplifted my spirits, knowing that there is still progress being made," he said in an interview on Thursday. "Notwithstanding the fact that not enough progress had been made." All of the top bank CEOs will still be white.

"Jane's appointment was the result of many years of investment for Citi," said Lorraine Hariton, the CEO of Catalyst, a group that advocates for women in leadership. "It's not just something you wake up and do overnight."

With Fraser's appointment to CEO, the 16-member Citigroup board, already the most gender diverse among S&P 500 banks, will become the only bank board that is evenly split by gender, according to data compiled by Bloomberg. The nominating and governance committee, which plays a key role in selecting the CEO, is also chaired by a woman.

There are 31 women who already lead S&P 500 companies, according to Catalyst. Having a woman heading up such a large bank will open up opportunities for others in the field, said Dina Powell, a former official in President Donald Trump's administration who's now a Goldman partner. "Her success and leadership will pave the way for women in finance," she said. "A significant milestone. She has always tried to lift and empower women around her."

Adena Friedman, president and CEO of Nasdaq, said Fraser's appointment "send an important message to all professional women – there are no limits to our capabilities and our potential."

Zehner, who's now an investor, left Goldman more than a decade and a half ago and has seen change come glacially inside the big American banks. "To say it was slow would be an understatement. There has not been a lot of progress, despite a lot of awareness."