Home » Markets » Why Afterpay thinks two CEOs are better than one

Nick Molnar's return this week to the chief executive role at Afterpay alongside Anthony Eisen shows that the founders of the $29 billion buy now, pay later juggernaut remain in the driver's seat as it faces ferocious competition across its key markets.

The re-alignment of the top jobs, and a new support cast that includes Suncorp's former banking boss Lee Hatton and ex-Salmat CEO Rebecca Lowde, are meant to ensure a laser-like focus on Afterpay's local operations – which offers the proof-of-concept for its global ambitions – and a successful international expansion needed to justify a share price that has skyrocketed more than 1000 per cent since March.

“The move to co-CEOs recognises the important opportunity ahead for Afterpay," Elena Rubin, the company's chair, told investors at the company's annual meeting on Tuesday. 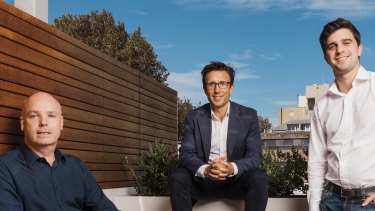 "The board believe that it is important to have an appropriate level of oversight, executive prominence and presence both internationally and domestically."

While the stock dropped below $100 that day – as good news on the COVID-19 vaccine front saw investors rotate out of stocks that have benefited from the pandemic to companies which could benefit from a return to normality – investors applauded both the company update and the executive restructure.

“The move to co-CEOs, from chief revenue officer for Nick, is probably as much a reflection of Afterpay’s international growth expansion plans and ensuring it's reflective of Nick’s seniority and status in helping to spearhead that effort,” says Steven Ng, a portfolio manager with Afterpay investor Ophir Asset Management.

Another Afterpay investor, Harry Dudley's Watermark Funds Management, says the AGM update confirms the company has been building strong momentum in the lead-up to the all-important festive season.

"We still have a favourable view on Afterpay’s growth prospects as it moves past the inflexion point in the US that it was once at in Australia," he says.

But Afterpay's ambition for global domination of this nascent sector is not getting any easier.

The day after the group's shareholder meeting, news broke that its major US rival Affirm is preparing to launch operations in Australia. It would be Affirm's first foray outside of the North American market as it plans to publicly list in the US.

Meanwhile in the crucial US market, data is emerging on just how big an impact PayPal is having on the buy now, pay later sector with its recent entry.

Financial services consultancy The Futurist Group released a report showing PayPal has moved to a dominant position just two months after its launch in the US. Its research shows twice as many BNPL users had used its service in the last six months than Afterpay's, which was the next most popular service.

The release of the corporate regulator's report into the sector on Monday was a reminder of the regulatory threats it also needs to keep at bay in Australia as well as every new market it enters.

The Australian Securities and Investments Commission (ASIC) indicated that no further regulation is under consideration at this stage. But its report was showing one in five users have missed payments and gone without meals to pay their bills, so no one can afford to rest on their laurels even if Afterpay managed to drum up research showing it is not the culprit.

But a bigger issue may be the hired help that Eisen and Molnar need to stay ahead of the growing BNPL pack.

The equity bonanza showered on Afterpay's employees and an exodus of senior executives have led to questions about the staying power of the founders' supporting cast.

Over the last year Afterpay has seen its chief marketing officer, chief technology officer and chief financial officer walk out the door. So has former executive director David Hancock, who ended up with stock worth more than $100 million.

They will soon be joined by Afterpay's big name hire from last year, former Facebook executive Malte Feller, whose role as chief operating officer has fallen victim to an Afterpay restructure which means there is no longer a role for him.

It is not just the big names who have been walking away with big stock bonuses.

Afterpay's annual report shows that most of the stock options and restricted stock units granted last financial year went to the company's 650 workers. These shares had a face value of more than $200 million.

But it was the stock awarded in previous years, with few hurdles and low strike prices compared to the company's soaring share price that led to questions at the AGM.

"Those arrangements were essential at the time they were put in place to attract and compete for top tier talent in the global tech sector," explained Rubin.

"No one could have foreshadowed the rapid growth of the business and the share price," she said.