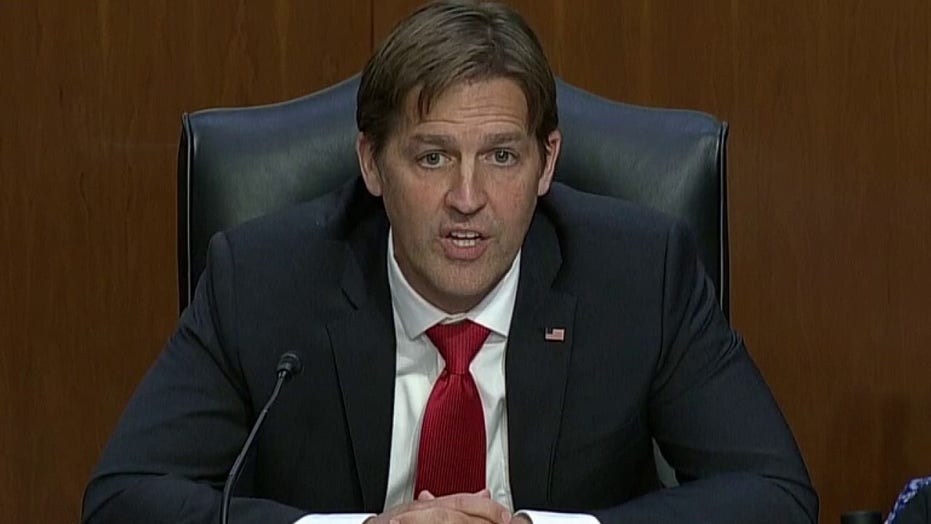 Sen. Ben Sasse rails against the idea of expanding the Supreme Court

Sen. Ben Sasse, R-Neb., issued a sharp criticism of the recent Democratic push to increase the number of Supreme Court justices and pack it with liberal jurists, warning that it would be a dismantling of core American principles.

Democratic leaders have hinted that they could use court packing as retaliation for Republicans swiftly moving forward with Judge Amy Coney Barrett's Supreme Court confirmation process. Sasse used his opening statement at Monday's hearing to deliver a civics lesson and explain why he believes this is a disastrous idea.

"We should underscore what is court packing," Sasse said. "Court packing is the idea that we should blow up our shared civics, that we should end the deliberative structure of the Senate by making it just another majoritarian body for the purposes of packing the Supreme Court. Court packing would depend on the destruction of the full debate hear in the Senate, and it is a partisan suicide bombing that would end the deliberative structure of the United States Senate and make this job less interesting for all 100 of us. "

A number of Democrats have called for court packing in response to Barrett's nomination.

Sen. Ed Markey, D-Mass., similarly called for packing the court, claiming it would be in response to Senate Majority Leader Mitch McConnell, R-Ky., filling a Supreme Court vacancy in an election year, after refusing to do the same during President Barack Obama's final year in office.

"Mitch McConnell set the precedent. No Supreme Court vacancies filled in an election year," posted on Twitter. "If he violates it, when Democrats control the Senate in the next Congress, we must abolish the filibuster and expand the Supreme Court."

Markey recognized that the only way Democrats could do this would be to change the Senate's rules by eliminating the filibuster, which currently requires 60 senators to end debate on legislation. Removing that hurdle would allow the Senate to pass a bill with a simple majority of 51 votes.

BIDEN IS SILENT NOW ON COURT-PACKING STANCE, BUT IN 1983 HE CALLED IT A 'BONEHEAD' IDEA

"What blowing up the filibuster would ultimately do is try to turn the Supreme Court into the ultimate super-legislature," Sasse said at Monday's hearing.

Democrats have threatened to pack the court well before the death of Justice Ruth Bader Ginsburg left an opening on the court. In August 2019, several Senate Democrats filed a brief with the Supreme Court in which they claimed the court was "not well," and threatened that it could be "restructured" if it did not "heal itself."

Meanwhile, Democratic presidential nominee Joe Biden and his running mate Sen. Kamala Harris, D-Calif., have been noticeably silent on the issue, only to say that they refuse to reveal whether or not they are in favor of court packing.

During the September 29 presidential debate, moderator Chris Wallace asked Biden whether he would be willing to pack the Supreme Court and end the Senate filibuster, and Biden flatly refused to take a stance on the issue.

“Whatever position I take on that, that’ll become the issue,” Biden said. When President Trump pressed him on it, Biden said, "I’m not going to answer the question."

In 2019, however, Biden spoke out against court packing in an interview with the Iowa Starting Line.

"No, I’m not prepared to go on and try to pack the court, because we’ll live to rue that day,” Biden said.