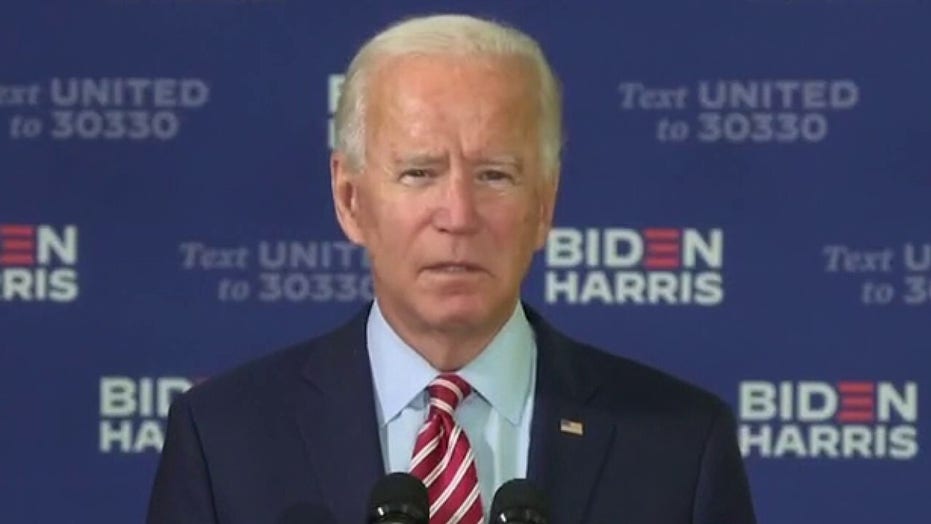 “Nowhere are his faults more glaring and more offensive, to me at least, than when it comes to his denigration of our service members, veterans, wounded warriors, the fallen,” the former vice president emphasized as he spoke before sitting down for a roundtable discussion with veterans at Hillsborough Community College in Tampa.

BIDEN HEADS TO FLORIDA WITH POLL SHOWING HIM UNDERPERFORMING WITH LATINOS

Biden was referring to a report earlier this month by The Atlantic that quickly went viral. The article, confirmed in part by numerous news organizations including Fox News, said that the president had referred to Americans killed in combat as “losers” and “suckers” and had repeatedly denigrated military service at other points during his tenure in the White House.

“Trump has no idea about the ideas that animate women and men who sign up to serve. Duty, honor, country. That’s what service and patriotism is all about,” Biden charged. 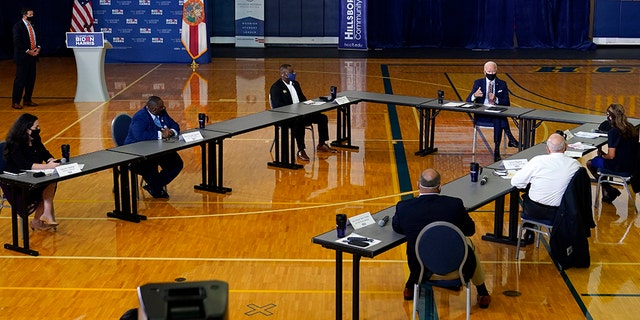 Biden also spotlighted the service of his late son Beau, who as Delaware attorney general deployed to the war in Iraq with his state’s national guard. “He was no sucker,” the former vice president said of his son.

The president has vigorously denied the report that exploded in media across the nation two weeks ago.

“It’s a total lie. It’s fake news. It’s a disgrace,” Trump said hours after the report went viral. And late last week the president claimed that “we had 25 people that were witnesses that are on the record already that have said that never took place. It never took place.”

“During our administration, President Obama signed the VA Access Choice and Accountability Act into law in 2014. President Trump likes to say he passed the VA choice, but just like everything else he seems to be saying, it’s a figment of his imagination. It’s a flat lie,” Biden stressed.

Eligibility for the program was expanded under Trump.

Biden urged that “we have a responsibility to ensure that we’re providing veterans with world class health care that they deserve in every situation. That means hiring more doctors and medical personnel and professionals to work at the VA.” 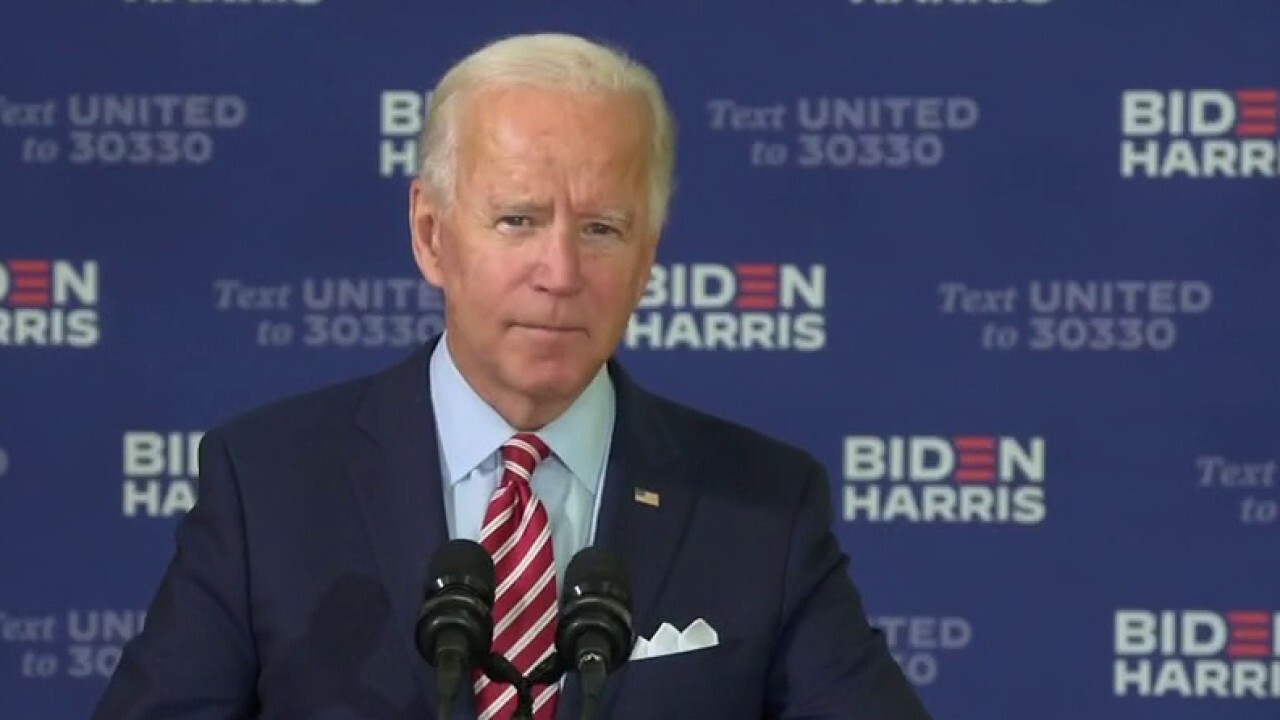 Biden’s roundtable with veterans in Florida’s I-4 corridor – home to many of the state’s swing voters – came minutes after a new poll indicated that 70% of Florida voters said that Biden respected America’s armed forces. Only 56% said the same thing about President Trump. But the public opinion survey from Monmouth University  also pointed to a slight 4-point edge for Trump over Biden in grabbing support from military households.

Hours before Biden headed to Florida, the president touted his defense credentials, saying during an appearance on ‘Fox and Friends’ that “we’ve stocked up our arsenal like nobody thought it was possible.”

The Monmouth poll also showed Biden topping the president 50%-45% in Florida among likely voters, according to a high turnout model. But the former vice president’s advantage over the GOP incumbent in the White House shrank to 49%-46% among likely voters in a low turnout projection.

The Monmouth poll was conducted Sept. 10-13 and has a sampling error of plus or minus 4.7 percentage points.

Biden has a slight 1.6 point edge in Florida, the biggest of the battlegrounds, according to an average of all the latest public opinion surveys in the state compiled by Real Clear Politics. That’s down from a 5-point advantage the former vice president held over the GOP incumbent a month ago.

Four years ago, Trump narrowly edged 2016 Democratic nominee Hillary Clinton in the state to capture Florida's 29 electoral votes, a big boost as he bested Clinton in the Electoral College count to win the White House.

On the eve of his first trip to Florida, Biden said his mission on Tuesday would be court Spanish-speaking voters. “I will talk about how I am going to work like the devil to make sure I turn every Latino and Hispanic vote,” Biden said when asked by reporters what his message would be.

And he arrived in the state as two recent surveys point to Biden underperforming with Latino voters and amid a bunch of negative headlines regarding his outreach to Spanish-speaking voters in the state.

When asked about his poll numbers among Hispanic voters, Biden said they were “much higher than [Trump's]. But they gotta go higher.”

Among likely Latino voters in Florida, recent polls from NBC News/Marist and Quinnipiac University indicate the president with a slight edge over Biden. (The Monmouth University survey of Florida released on Tuesday indicated Biden with a large lead over Trump among Latino voters.) That’s a significant switch from four years ago, when 2016 Democratic nominee Hillary Clinton crushed Trump by more than 25 points among Florida’s Latino voters, according to exit polls. The exit polls indicated that Latinos made up 19% of the state’s electorate.

After stopping in Tampa — where the former vice president did not take questions from reporters — Biden was headed to Kissimmee for an event to mark the start of Hispanic Heritage Month. Both Tampa and Kissimmee are parts of Florida with areas with large Puerto Rican populations. Unlike Cuban-American voters, who trend Republican, voters of Puerto Rican heritage typically favor Democrats.

But the Republican National Committee’s Steve Guest charged, “Biden traveling to Florida on the first day of Hispanic Heritage Month won't make up for months of his campaign taking the Hispanic vote for granted."

Guest argued that “Biden’s trip to Florida today is a stunning reminder that Biden is not only failing to resonate with Hispanic voters but he is hemorrhaging support in the Latino community because of his far-left agenda.”

And in a tweet, Guest claimed that Biden was in "panic mode."

Jennifer Molina, the Biden campaign’s Latino outreach director, emphasized that "the Hispanic vote will be a deciding factor and we are not taking it for granted."

She told Fox News, "This is why we made investments early on and are currently doing the work to reach voters in English and Spanish across all platforms — TV, radio, digital, mail and culturally-competent outreach — that underlines Joe Biden's commitment to help the Hispanic community prosper and thrive and more importantly call out  the devastating impacts of Trump's failed leadership to our community."

Some Democrats in Florida are also ringing alarms over what they say is a sharp rise in disinformation on social media aimed at Spanish speaking voters that falsely paints Biden as a socialist.

Asked about the disinformation campaign as he boarded his flight to Florida, the former vice president said "just tell the truth. Everybody knows who Trump is. People are going to show up and vote."

Also perplexing are the poll numbers, as Trump has long been viewed by critics as the more anti-immigrant candidate, dating back to the first speech of his 2016 presidential campaign, when he argued that many Mexican illegal immigrants to the U.S. were “rapists.”

Later in the campaign, he created another controversy when he questioned whether a federal judge of Mexican heritage could be objective.

But Biden has his own baggage. In the Democratic primaries, he was repeatedly pummeled by rivals over the increased deportations of illegal immigrants during the Obama-Biden administration. There were also complaints that his campaign’s leadership lacked Latinos, and that he concentrated far too much on courting African American and suburban voters at the expense of Latinos.

Biden’s lack of support among Latinos was evident early in the primary calendar. His main rival, Sen. Bernie Sanders of Vermont, won more than half the Latino vote in February’s Nevada caucuses. And the progressive senator crushed Biden among Latinos in California and solidly defeated the former vice president among Spanish-speaking voters in Texas on Super Tuesday in early March.

Chuck Rocha, who spearheaded Latino outreach for the Sanders campaign, has raised alarms that Biden risks losing a crucial voting population. But Rocha told Fox News that “the good news is that they don’t have to make up that many points. So there’s still time. They only need to move the needle five to 10 more points to put this thing away, so, as long as there’s more direct investment in communicating regularly with Latinos about what Joe Biden’s going to do make their lives better, he can move that needle.”

Rocha said he’s seen signs of improvement by the Biden campaign: “I’ve been more encouraged every day by their performance.”

On Sunday, former New York City mayor and multi-billionaire business and media mogul Mike Bloomberg, who briefly ran for the Democratic presidential nomination, vowed this week to spend $100 million on Biden's behalf in Florida, with some of the funds going to court Latino voters.