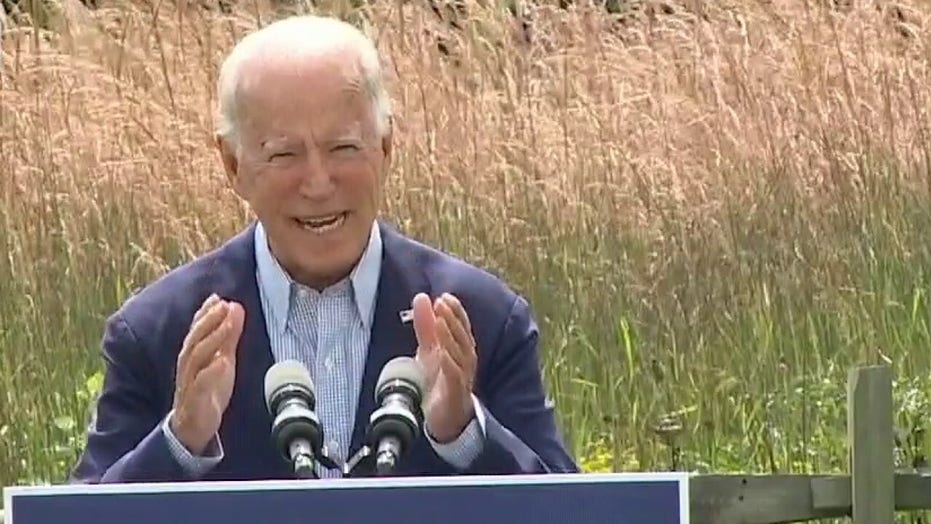 Democratic presidential nominee Joe Biden accused President Trump of being “a climate arsonist” and charged that if the president wins another four years in the White House, the wildfires raging across the western United States will become more “devastating and more deadly.”

Pointing to the wildfires, as well as this summer’s massive flooding and damaging hurricanes, the former vice president argued that “Trump’s climate denial may not have caused these fires and record floods and record hurricanes, but if he gets a second term, these hellish events will continue to become more common.”

Biden made his comments during a nearly 25-minute outdoor speech at the Delaware Museum of Natural History, where he took a page from Trump’s playbook by emphasizing the perils posed to America’s suburbs.

The president for months has pointed to the violence and unrest flaring up amid some of the nationwide protests over police brutality and racial inequality – a law-and-order pitch by Trump meant to woo White suburban voters who backed him in 2016 but fled the GOP for the Democratic Party in the 2018 midterms.

The former vice president charged that Trump “has no interest in meeting this moment. We know he won’t listen to the experts or treat this disaster with the urgency it demands. This is another crisis, another crisis he won’t take responsibility for. The West is literally on fire and he blames the people whose homes and communities are burning.”

And Biden also vowed if elected to “meet this moment with urgency and purpose. We can and we will solve the climate crisis.”

Biden spoke minutes before the president landed in California to meet with Democratic Gov. Gavin Newsom and federal and state officials battling the blazes. Trump has discounted the impact of climate change as a cause of the wildfires. Speaking with reporters upon landing in California, the president repeatedly emphasized the need for forest management and argued that some European nations do a better job managing their forest.

The president and other Republicans have stressed that decades of poor forest management in states run mostly by Democrats are to blame for the massive blazes. Trump spotlighted that there “has to be good forest management, which I’ve been talking about for three years.”

“When trees fall down after a short period of time they become very dry – really like a matchstick… and they can explode. Also leaves. When you have dried leaves on the ground it’s just fuel for the fires,” the president emphasized.

And he stressed that “it’s a very important subject. You drop a cigarette on it, you come back an hour later and you have a forest fire.”

Newsom agreed that more forest management efforts are needed. And he thanked the president for the federal response to battle the wildfires. The governor’s comments were quickly showcased on social media by the Trump reelection campaign.

But Newsom also spotlighted climate change as a contributing factor.

“We feel very strongly the hots are getting hotter, the dries are getting dryer. Something has happened to the plumbing of the world and we come from a perspective, humbly, that we assert the science that climate change is real," the governor highlighted. “Please respect the difference of opinion out here with respect to the fundamental issue of climate change.”

After another speaker spotlighted climate change, the president interjected to say “it will start getting cooler.”

Scientists say that while wildfires are all but inevitable, the main drivers are plants and trees drying out due to climate change and more people living closer to areas that burn. Forest thinning and controlled burns have proven challenging to implement on the scale needed to combat those threats.

Biden has repeatedly accused the president of ignoring the scientists when it comes to climate change as well as combating the coronavirus pandemic.

Biden’s running mate – Sen. Kamala Harris of California – returns to her home state on Tuesday to meet with fire officials.