A member of staff at a school recently visited by the prime minister has tested positive for coronavirus.

Boris Johnson was at Castle Rock school in Coalville, Leicestershire on 26 August.

He was at the school as it welcomed pupils for the first time since the COVID-19 lockdown. 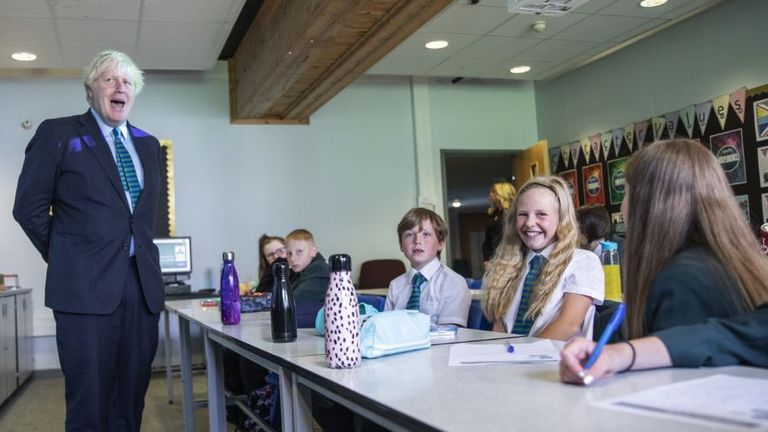 During his time there, Mr Johnson delivered a speech to pupils in which he cited the debate surrounding Rule, Britannia! as an example of a concept that teachers are able to help them understand.

The PM also referred to the “supine stem of confiteor” from Latin study and gave his view on Harry Potter and whether it is sexist or not.

Michael Gamble, the head of the school, revealed the positive coronavirus test in a letter to parents.

“We apologise for the lateness of this letter, however this evening we have been informed that one member of our staff at The Castle Rock School has been tested positive for COVID-19,” he said.

“The health, safety and well-being of our students is paramount.

“Please be assured that we have sought immediate advice from Public Health England this evening, and we are continuing to closely follow the published government guidance.

“Staff who may have been in ‘contact’ with the staff member have already been contacted by the NHS Test and Trace process.”

Schools in England and Wales began reopening for all year groups last week, with the remainder due to open this week.

Dozens of schools have reported cases of COVID-19 since reopening.

Some have had to close their doors, while others have told entire classes and year groups to self-isolate for two weeks.

Samuel Ward Academy in Haverhill, Suffolk closed on Monday on the advice of Public Health England after five members of its teaching staff tested positive.

Two other staff members are awaiting their test results.

The school described the closure as a “precautionary measure” and said it hoped to reopen on Tuesday.

Liverpool City Council said eight schools have had positive cases of the virus, with the year 11 “bubble” at Liverpool College told to self-isolate after a pupil was confirmed as having coronavirus.

All 160 year nine pupils at St Augustine’s Catholic College in Trowbridge, Wiltshire have been told to self-isolate after a student tested positive.

The JCB Academy in Rocester, Staffordshire, shut on Friday after a pupil tested positive for the virus, with around 100 students told to self-isolate.

In Wales, at least 10 schools are believed to have been affected by coronavirus.

Thirty children from Ysgol Bro Edern have been asked to self-isolate for 14 days in the wake of a confirmed case, Cardiff Council said on Monday.

The year seven pupils were identified as contacts of a fellow student who tested positive on Sunday.

Meanwhile, a class of 21 pupils at St Gwladys Primary School in Bargoed, Caerphilly, have also been told to self-isolate for two weeks after a staff member tested positive.

And the return to the classroom for some year groups has been delayed at Ysgol Bryn Castell in Bridgend and Ysgol Maesteg after members of staff returned positive COVID-19 tests.