California, Michigan and three other states – plus the District of Columbia – are suing Education Secretary Betsy DeVos and her department, opposing what they say is a plan to take coronavirus relief funds away from K-12 public schools and divert the money to private schools.

“Today's announcement is about stopping the Trump administration's latest effort to steal from working families to give it to the very privileged," Becerra said, according to The Associated Press.

“Unfortunately, this most recent action by Secretary DeVos is really just another example in a long history of an administration that uses any and every opportunity available to tip the scales in favor of private schools at the great expense of our public schools,” Nessel said at a separate news conference, MLive.com reported.

“Instead of ignoring congressional intent and diverting funds away from public schools, Secretary DeVos should follow the law,” Wisconsin Attorney General Josh Kaul said, according to the Milwaukee Journal Sentinel.

The department's interpretation will instead allow school districts to get funds based on their total student population, leading tens of millions of dollars to be diverted from public schools in the poorest districts to private institutions with tuition similar to that charged by private colleges, the lawsuit says.

Education Department press secretary Angela Morabito said that while the department does not comment on pending litigation, “the secretary has said many times, this pandemic affected all students, and the CARES Act requires that funding should be used to help all students.”

On a call Monday with Vice President Mike Pence and the nation’s governors, DeVos said governors have not taken advantage of the funding and so far only $195 million has been used.

Under the rule issued by DeVos, school districts are ordered to set aside a portion of their aid for private schools using a formula based on the total number of private school students in the district. 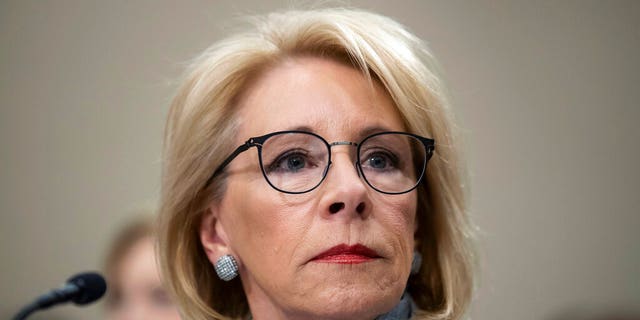 The policy has been contested by public school officials who say the funding should be shared based on the number of low-income students at local private schools rather than their total enrollments. That’s how funding is shared with private schools under other federal rules that Congress referenced in the legislation creating the relief aid.

But DeVos has said the funding is separate from other federal aid and was meant to support all students.

Becerra said the rule “creates a false choice where school districts must include private schools on the basis of their total population or be forced to jump through unnecessary hoops to do what Congress intended and make sure the funds get to schools that are hurting the most.”

He said it could put some of $1.6 billion allocated for California public schools at risk.

In Michigan, officials said the rule could cost public schools at least $16 million, including $2.6 million each in Detroit, the state’s largest district, and Grand Rapids, where DeVos has roots.

Michigan state schools Superintendent Michael Rice said nonpublic schools there are entitled to $5.1 million under the relief law but would get $21.6 million under one of two options outlined under DeVos’ policy.

“The U.S. Secretary of Education manufactured guidance and their rule that favored nonpublic schools at the expense of public schools in a way neither intended nor enacted by Congress,” he said.

In Wisconsin, Kaul said the DeVos rule would divert nearly $4.2 million "away from taxpayer-funded public schools in our poorest school districts to private institutions — in violation of the requirements established by Congress, the Administrative Procedure Act, and the U.S. Constitution."

The Associated Press contributed to this story.