Home » Politics » General election: What to watch out for as the results trickle in

This is the first December election since 1923.

So, since it is Christmas, get a drink (something strong to toast a victory or drown sorrows) and a mince pie and follow Dermot Murnaghan’s countdown to the exit poll announcement at 10pm.

In 2010, the forecast said the Conservatives would be the largest party but 19 seats short of an overall majority.

In 2015, it predicted 316 seats for David Cameron, 10 seats short of a majority. He did win a small majority, but his final tally was within the exit poll’s tolerance of plus or minus 20 seats. 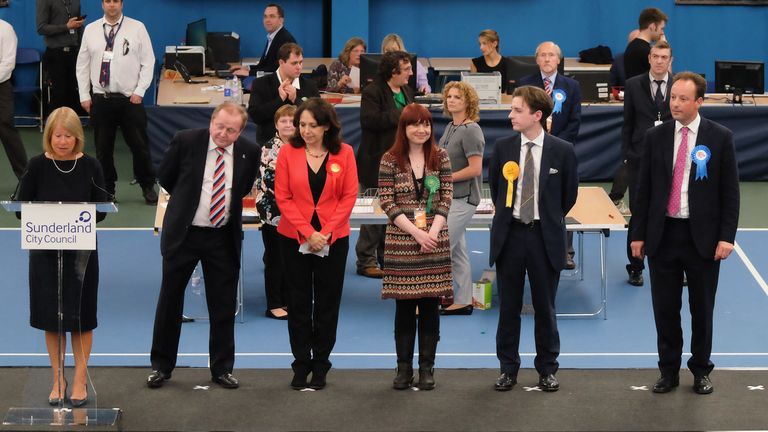 In 2017, another hung parliament was forecast. Had Theresa May’s gamble backfired? It had.

Competing explanations for the 2019 forecast will be headlined by Brexit but will include leaders, pacts, tactical voting, independents, the SNP, indyref2 and a low/high turnout.

On the night, turnout will be the first hard news.

We won’t know why turnout has risen/fallen because we have a secret ballot (since 1872, in fact).

Older citizens are more likely to vote than younger ones. Higher turnout reflects the critical nature of this election. Lower turnout shows people have switched off from politics and politicians. It will be a matter to discuss while waiting for the first results.

It will be Tyneside versus Wearside as Newcastle (current holders) and Sunderland (previous winners) vie for first declaration. Newcastle voted Remain, Sunderland Leave. The change in Labour vote share will be crucial.

A sharper fall in Sunderland points to Brexit. A steep decline in both cities will cost Labour seats later.

An early tip is to watch Sunderland Central. Labour has a big majority but has been losing council seats to the Conservatives and Liberal Democrats.

If the Conservatives come within 5,000 votes, then it’s time to ask Labour HQ for a comment. Sky’s economics editor Ed Conway and deputy political editor Sam Coates will be providing the detailed analysis overnight.

Rely on Sky’s political editor Beth Rigby to sort the wheat from the chaff. 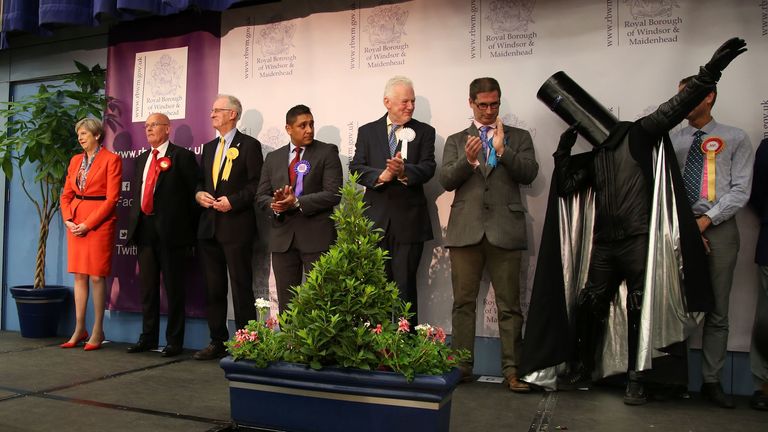 At around 1am, Labour leads in Darlington and Workington will be under threat.

Darlington was a Conservative seat in the 1980s, but Workington has been forever Labour at general elections.

With both towns voting strongly against EU membership, these northern seats typify Tory campaign strategy. With two Conservative victories in these seats, only losses in southern England and Scotland will threaten Mr Johnson’s chances of winning a majority.

Critically, the first result from the Midlands might be Leave-voting Nuneaton gained by the Conservatives in 2010 and now with a 10-point majority. Two Swindon seats, north and south, are expected around then too.

No Brexit Party candidates are standing in any Conservative-held seats. Swindon South is the most marginal and voted like the country did in 2016. If Labour captures this then Remainers have voted tactically.

Around this time, the on-screen seat counter will show Labour ahead because of the order seats declare. In 2017, it was 4am before the Conservatives overtook the Labour tally.

The first result from Scotland, where most of the 59 constituencies are marginal, is expected in Rutherglen & Hamilton West.

If Labour holds then the SNP recovery disappears; an SNP gain suggests their own marginal seats (30 of 35 seats have majorities under 10%) are safer.

Angus may be the first Conservative/SNP battleground where the former defends a 2,645 majority. The party made impressive headway against the SNP in 2017, emerging with 13 seats overall. If the Conservative vote holds up, talk of a second Independence referendum will abate. SNP success, however, means Nicola Sturgeon to the fore.

Wrexham (Leave vote 58%) is part of a cluster in north east Wales where the Conservatives could advance. Another is Vale of Clwyd, an example of a current and former MP resuming battle in a classic marginal Labour/Conservative constituency.

This is a must-win seat for the Conservatives if defeat later comes in Vale of Glamorgan. Alan Cairns, the incumbent, resigned as Secretary of State for Wales on day one of the campaign, giving Labour a great opportunity.

The rival Ulster Unionists have withdrawn, but the nationalist vote too will be concentrated after the Social and Democratic Labour party’s decision to defer to Sinn Fein. In Belfast South, which the DUP gained last time, the SDLP has now been given a clear run. There are only three candidates contesting Belfast East but two are unionists trying to prevent the former Alliance MP, Naomi Long, from making a return.

Wandsworth leads the order of declarations in London, a region that has swung behind Labour in recent elections.

Battersea was a Labour gain in 2017. Putney is a Labour target this time. If Labour win both then the Conservatives can expect other losses, including perhaps former leader, Iain Duncan Smith in Chingford & Woodford Green.

Should the Conservatives hold Putney and re-capture Battersea then an increased Lib Dem vote has scuppered Labour’s chances.

Across the country it is the results in towns rather than cities that are crucial. Burnley is worth watching for how the Brexit election unfolds.

Two-thirds voted to leave the EU but Labour’s 16% majority should, in normal circumstances, be enough. But this election is far from normal.

Increased votes for the Liberal Democrats at Labour’s expense could see a Conservative win, a pattern that may be repeated over the following two hours. An exception may be Labour-held Hartlepool, which offers the Brexit Party’s best chance.

A feature of this election is the large number of former MPs challenging their former party. Bury South’s Ivan Lewis, standing as an independent, has now asked electors, many of whom are from the Jewish community, to support the Conservatives. If Labour’s other seat in the town falls, then it is likely that Brexit rather than antisemitism is the stronger explanation.

Between 2am and 3am, 100 seats will declare. More than double that will declare in the following hour. Our results service will show the number of seats gained and lost but it will also show the change in vote share. The vote share for both main parties may be falling, but which has fallen most?

Jeremy Corbyn’s safe Islington North seat should be announced around 3am. His acceptance speech is a clue to the general feeling within Labour’s ranks. It will be 90 minutes or so before Boris Johnson gets his turn in Uxbridge & South Ruislip.

Eurosceptic John Redwood’s Wokingham constituency (which voted for Remain) sees a challenge from his former colleague and now Liberal Democrat, Philip Lee, who formerly represented the neighbouring seat of Bracknell.

Close by is Esher & Walton where Foreign Secretary Dominic Raab should be cruising to victory but isn’t. Almost six in 10 voted for Remain here and the Liberal Democrats’ Monica Harding hopes to stage manage a “Portillo moment” by defeating a leading minister.

A clutch of Conservative targets also loom large. These include Stockton South (the most marginal of the bunch with only 0.8% swing required), Great Grimsby, Wolverhampton South West, High Peak, Bolton North East, Bishop Auckland, Blackpool South, Bristol North West, Ipswich and Stroud. If the Conservatives are set for an overall majority then results in these seats calibrate its size. Failure to win means hung parliament territory.

Chuka Umunna’s journey from prospective Labour leader to the Liberal Democrats was just one of the reasons for Jo Swinson’s fabulous optimism at the campaign start.

Yes, the party will have added votes to its miserable 2017 total, but it’s seats that matter. Umunna’s chance in Cities of London and Westminster are slim – a leap from third to first.

A better prospect, perhaps, is Sarah Wollaston, who became the first to negotiate an open primary election on her way to becoming Conservative MP but who now fights Totnes for the Liberal Democrats.

Defectors apart, the Lib Dems should expect to defeat Labour in Nick Clegg’s former seat Sheffield Hallam and in Leeds North West while prising Cheltenham and Cheadle away from the Conservatives. Failure to do so might see an apologetic Ms Swinson pondering her future.

The Conservatives have targeted many seats in towns – Gedling, Penistone & Stocksbridge, Peterborough, Canterbury, Rother Valley and Scunthorpe – which should be declaring from 3am onwards.

Late in the day, Labour’s campaign changed tack, recognising that resources should be diverted into these areas and away from Conservative marginals like Bolton West, Morley & Outwood, Reading West, Telford and Worcester. Is it too little, too late?

Boris Johnson’s declaration is due at 4.30am. More than 100 declarations follow this. If a Conservative majority is assured, then his procession back to Downing Street will be followed closely.

Should the result still be in doubt, every seat lost and every target missed is crucial from here on in.

Can the Conservatives survive in Hastings & Rye, where Labour threatens, or Lewes? The latter was captured from the Liberal Democrats in 2015 but will be vulnerable if Remainers have mobilised against Johnson’s Brexit.

Among the last constituencies to declare will be Richmond Park at 6am and St Ives at 8am. Both are Conservative marginals that might fall to the Liberal Democrats.

If we’re still on tenterhooks, then this truly has been one of the most remarkable general elections.

In seats where candidates are mentioned above, here are the full names of those running:

The Brexit Election on Sky News – the fastest results and in-depth analysis on mobile, TV and radio.