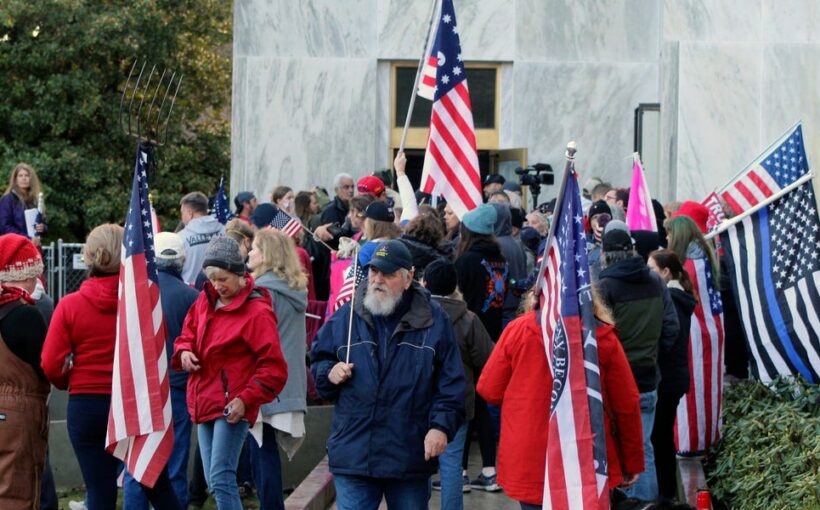 A GOP state lawmaker was charged Friday, after video appears to show him open the door to the Oregon State Capitol, allowing right-wing protestors to enter the building.

During a demonstration on December 21 of last year, surveillance video appears to show state Rep. Mike Nearman physically opening a door to the Capitol building without shutting it behind him, allowing protestors waiting outside the Oregon Capitol to quickly enter the building.

In the video, Oregon State Police later arrived to push protestors back outside and standing in the open door while facing off a crowd of protestors. Four people were arrested in the incident, which was later declared an unlawful assembly.

On Wednesday, Oregon Speaker of the House Tina Kotek said during a press conference that it was Nearman who opened the door “to let demonstrators into the building.”

“This was a serious, serious breach of public trust,” Kotek told reporters Wednesday.

Democratic lawmakers accused Nearman of putting lawmakers and Capitol staffers in danger for his actions in a formal complaint filed in January. The complaint described Nearman’s actions as “completely unacceptable, reckless, and so severe that it will affect people’s ability to feel safe working in the Capitol or even for the legislature,” citing a report by Oregon Public Broadcasting.

“He let a group of rioters enter the Capitol, despite his knowledge that only authorized personnel are allowed in the building due to the COVID-19 pandemic,” the complaint said.

He faces one count of official misconduct in the first degree for “unauthorized exercise of his official duties, with intent to obtain a benefit or to harm another,” and another count on criminal trespass in the second degree for aiding and abetting “another to unlawfully and knowingly enter and remain in and upon the premises of the Oregon State Capitol.”

Nearman did not immediately respond to Insider’s request for comment on the charges filed by the Marion County district attorney.