The national unemployment rate has risen faster than it has in decades, the government announced Friday, as the Trump administration struggled to move forward with new policies to reduce the economic devastation of the coronavirus pandemic.

One week ago, Congress authorized bigger unemployment benefits, $1,200 payments to American households and billions of dollars worth of forgivable business loans meant to stave off layoffs. None of those policies has taken effect, to the frustration of their intended beneficiaries.

President Donald Trump and Treasury Secretary Steve Mnuchin said the so-called Paycheck Protection Program ― which will allow small business owners to ask banks for government-funded loans that would cover payroll costs and be fully forgiven if the company avoids layoffs for eight weeks ― would launch Friday. But the nation’s biggest banks said they weren’t ready, and half a dozen business owners told HuffPost on Friday that they weren’t able to apply for the loans.

“It’s a lot like banging your head in to a wall and not getting anywhere,” said Scott Cavendish, owner of a craft brewery in Gastonia, North Carolina. “We reached out to four separate banks and all we get is, ‘If you’re interested, put your email here and we’ll contact you.’”

Cavendish said he has already laid off nine of his 12 employees. The forgivable loans would theoretically allow him to hire them back at no cost, as the government would essentially pay their salaries for eight weeks. 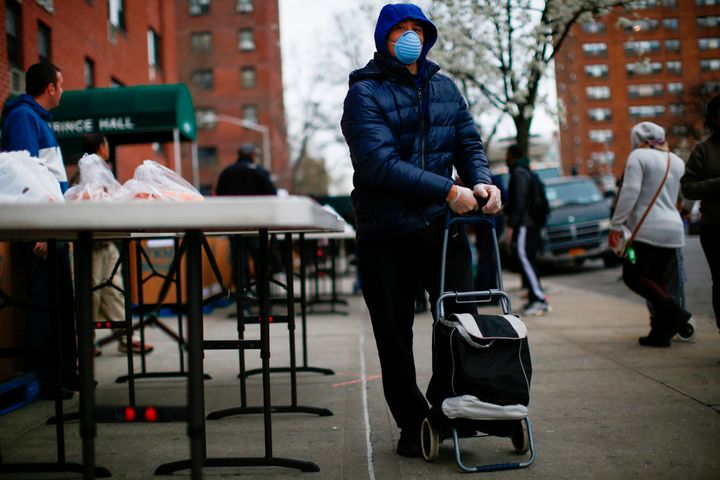 More than 10 million workers nationwide have filed for unemployment insurance benefits in the last two weeks, and the unemployment rate has risen from 3.5% in February to 4.4% ― the fastest increase since 1975, the Labor Department said.

The early delays don’t mean the federal government’s response is totally doomed. But rollout almost certainly won’t be as smooth as most people hoped. Businesses across the country are shuttered to reduce the spread of the coronavirus, which has killed more than 6,000 Americans and is flooding hospitals with sick patients.

The rebate checks coming to most Americans will land in bank accounts within weeks ― but that’s only for people who have filed a federal tax return in the last two years. Most people who haven’t filed recently will have to do so, but many have encountered glitches with online software that won’t let them file if they’ve had no taxable income. As a result, the Treasury Department announced this week that it would automatically send checks to anyone who is already receiving Social Security payments.

“The administration must do more to get this support for workers and businesses as soon as possible,” Sen. Ron Wyden (D-Ore.) said Friday on a press call. “We’re learning people won’t get [$1,200 rebate checks] for months. … We won’t let that happen when it comes to unemployment insurance.”

Democrats are pressing the Trump administration to issue guidance to states on how to implement the bigger unemployment benefits to people who have lost jobs due to the pandemic. They also want states to rapidly expand access to the benefits by hiring more people to process claims, as several states have reported record levels of claims that have choked access to phone lines and websites.

The Department of Labor is still working to get out guidance on the expanded unemployment benefits, which will include an additional $600 weekly benefit to anyone out of work because of the pandemic. The agency released some very crude guidance Thursday night, but it won’t be enough to give the state’s clear direction in distributing desperately needed cash.

Once that guidance comes out, states will still need time to get up and running.

“The [agency] is working as fast as it can, it is very anxious to get everything right and put in place policies that make this a workable program,” said Michele Evermore, a senior policy analyst at the National Employment Law Project.

Meanwhile, millions of Americans are sitting at home without paychecks, and wondering how they’ll pay for food or rent.

As for the Paycheck Protection Program, the biggest bank in the U.S., JPMorgan Chase, said it needed more federal guidance before it would take applications. The second biggest, Bank of America, said it would only take applications from existing customers who had multiple accounts.

“We’re pushing them to go as quick as possible because businesses are teetering on the brink,” he said. “Speed is of the essence here. Making sure the banks move quickly and getting [the Small Business Administration] to work with the banks is vital. I think many, many banking institutions are very eager to be involved here.”