Home » Politics » If Texas Is Going To Turn Blue, It Starts With This Special Election

When Beto O’Rourke traveled to his home state of Texas for the recent Democratic presidential debate, he made a surprising stop: at a rally with a state legislative candidate who is barely known outside the exurbs of Houston.

But if she wins Texas’ 28th Statehouse District in November, Eliz Markowitz could help change the course of U.S. politics for the next decade.

That’s because, over the next 13 months, Democrats have a genuine shot at breaking Republicans’ iron grip on Texas — if they can flip just nine seats in the 150-member Texas House. And Markowitz, a longtime educator, is locked in a tight special election for one of the handful of seats Democrats have to flip to make that happen.

Control of the chamber would give Democrats a say in the all-important 2021 redistricting process — the decennial redrawing of legislative districts according to new census data — and give national Democrats a huge advantage in holding their majority in Congress.

Texas, thanks to severe Republican gerrymandering, currently provides the GOP with its single largest source of congressional power: Two-thirds of Texas’ U.S. representatives are Republican, even though in 2018 they won only 50.4% of votes cast for Congress.

Ahead of the Nov. 5 contest, Markowitz is drawing the focus of nearly every Democratic group in the country whose mission it is to win down-ballot races.

“We’ve had support from all over the country,” she said.

They’re sending strategic advice, voter data, targeting methods, email lists several hundred thousand-strong with small donors, and volunteers. Besides the O’Rourke campaign, Annie’s List, a Texas version of EMILY’s List that recruits and funds female Democratic candidates, is spending five figures to help her win, and the Texas Democratic Party is lavishing “a lot of resources,” said Abhi Rahman, the group’s spokesman. (Ahead of an October deadline to disclose its spending, groups are being cagey about precise figures.)

The Democratic Legislative Campaign Committee and the Future Now Fund are also funneling unknown sums, and groups like Run For Something, which supports down-ballot progressives, are providing strategic advice.

“If Markowitz is able to somehow win or come very close, that would lend a lot of credence to the idea that Republicans are faced with the principal challenge in 2020 of holding onto [their] majority in the Texas House,” said Mark Jones, a political professor at Rice University. “That would be a signal of a real vulnerability to losing the chamber in 2020.”

Beyond the national significance, what happens here happens to millions of people — and eventually, given Texas’ outsize influence, to the nation.

“The Texas legislature, for better or for worse, has been the policy laboratory of the country,” said Royce Brooks, the executive director of Annie’s List. From abortion restrictions to criminal justice reforms, “A lot of the ideas that come out of there get replicated everywhere. This really is ground zero.” 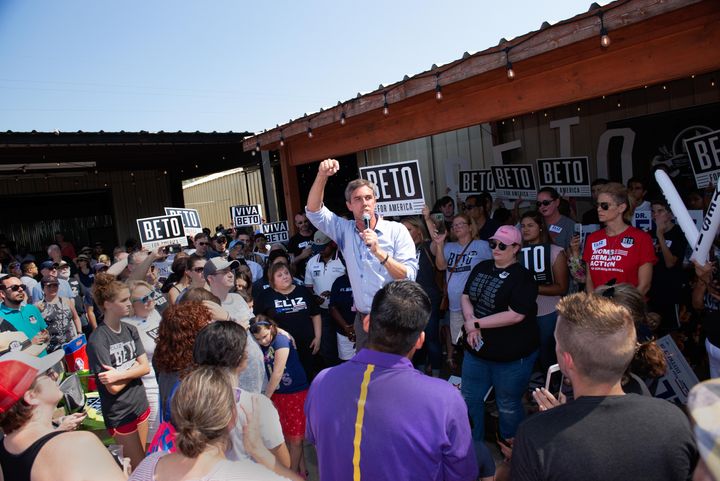 National fervor for the dream of a blue Texas is not new, and it is fueled by the very concrete reality that populations that tend to vote for Democrats, such as Latinos and Asian Americans, are growing faster and larger than Texas’ white population.

“Blue Texas was always based on a demographics-as-destiny approach,” said Jones. “It hinged on the assumption that Democrats could always assume Asian American, Latino support,” but for a long time, it lacked actual outreach from Democrats to nonwhite voters, either to win their support or register them as new voters.

A big shift occurred when O’Rourke challenged Sen. Ted Cruz in 2018 and invested in a serious turnout effort. Democrats that year flipped 12 seats in the Texas House, and O’Rourke won nine districts that elected Republicans. Texas Democrats plan to spend millions in 2020 to flip those nine seats, plus 13 more that Cruz carried but are trending blue.

Markowitz’s district, which sprawls west from Sugar Land and the Houston suburbs into the exurbs and farmland, is one of those: a district Cruz carried by 3 points that is also one of the fastest-growing areas in the state and one of the most diverse regions of the country. President Obama, Hillary Clinton and O’Rourke all lost this district, but with increasingly smaller margins.

Markowitz’s chances are about the best she could hope for in 2019. Initially, she was set to challenge a popular Republican incumbent in 2020. But he resigned, thrusting Markowitz into a special election against six Republicans.

If none of the candidates win 50% of the vote, the top two advance to a runoff. The large slate of Republicans all but guarantees that Markowitz would make the runoff, and it essentially makes her the only candidate in the race who could win outright.

“Our plan is to win outright,” she said.

Markowitz is running on a platform of expanding health care in Texas, taking partisanship out of the redistricting process and holding a special legislative session to pass gun reform laws — the opposite platform of most of her opponents, who support conservative priorities such as abortion restrictions and oppose gun control.

Republicans have numerous built-in advantages in this race, like a slight majority among the district’s registered voters. As a general rule, voters who show up for special elections tend to be older, whiter and more conservative. Texas also allows eligible senior citizens, who tend to be white and vote Republican, to receive their ballots by mail, meaning those voters will have an easier time participating in the Nov. 5 vote than many of Markowitz’s supporters.

Markowitz and her allies are combating these disadvantages with an aggressive turnout operation. Outside groups are helping Markowitz identify new and unregistered voters in her district, who lean Democrat, and Markowitz has a plan and the financing to reach out to more than 10,000 of them.

Texas Republicans are highly attuned to the threat. GOP-aligned groups are raising millions to help hold the Texas House and even the state at large: Engage Texas, a federal super PAC, announced a plan to raise $10 million to register new voters for 2020.

“There is nothing more important — not only to Texas, but literally, the nation — than to make sure that we maintain the Texas House,” Republican state Sen. Kelly Hancock said a recent rally. (The Republican State Leadership Committee and the Texas House Republicans political arm did not respond to requests for comment).

“[That’s] what’s really exciting about this special election,” said Matt Harringer, a spokesman for the DLCC. “For the first time in some time, almost two decades, Republicans are going to be sweating Texas.”