Home » Politics » In Michigan, a Suburban County That Flipped Blue Isn’t Looking Back

Oakland County, Mich., a Republican stronghold 12 years ago that is now solidly Democratic, is a prime example of the political evolution taking place in many of the nation’s suburbs. 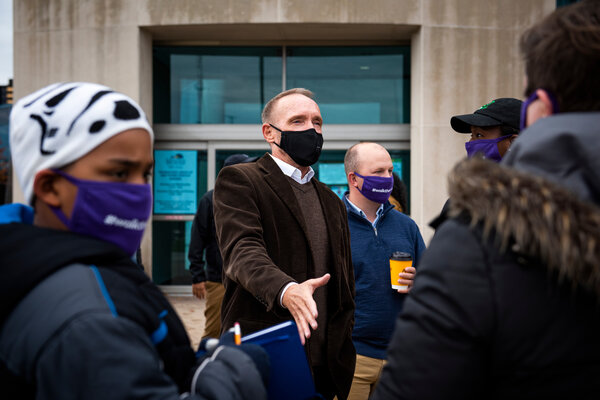 WATERFORD, Mich. — As President Trump prepares to campaign on Friday at an airport hangar in Waterford, a city in Oakland County northwest of Detroit, he’ll find the place very much changed from the last time he visited there for a rally five weeks before the 2016 election.

That year, Michigan Republicans held a majority in the Oakland County Board of Commissioners, the governing body of the county’s 1.2 million people, reflecting the party’s dominance across the state, whether it was with congressional seats, or in the State House and State Senate.

But now Oakland County, which was solidly red 12 years ago, is solidly blue, becoming a prime example of the changes that are taking place in many of the nation’s suburbs.

This year, voters in this suburban area outside Detroit are poised to elect its first Democratic county executive: Dave Coulter, a former teacher and public relations executive who began his political career in 2003 when the county was solidly Republican.

“I remember getting up there with all of my great ideas on transit and regional cooperation, but thinking we need more numbers,” Mr. Coulter, 60, said of his campaign for the Oakland County Board of Commissioners, which at the time had a 19-to-6 Republican majority. “And it’s been a dramatic shift.”

This is a county that was dominated by Republicans. Its former executive, L. Brooks Patterson, served in that role beginning in 1992 and was so popular that in 2004, Democrats didn’t even field a candidate to run against him.

“I could run a line across the county and it would be 70 percent Republican,” Judge Jim Alexander, 71, of the Oakland County Circuit Court, said about the county’s political makeup in the 1990s when he served as chairman of the Oakland Republican Party. “But it’s just not that way any longer. We’ve become a microcosm of the country.”