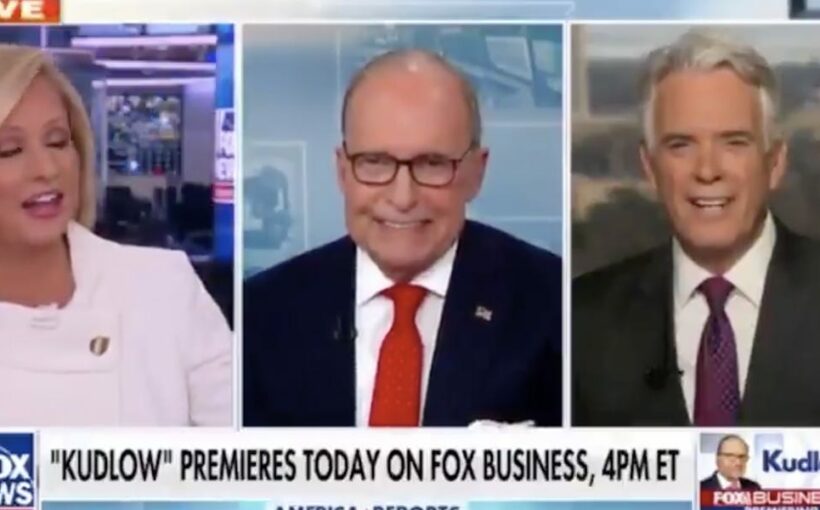 Kudlow repeatedly said “bulls—” in response to claim by Vice President Kamala Harris that the Biden administration was “starting from scratch” in its vaccine distribution strategy.

Kudlow was appearing on “America Reports” Tuesday afternoon to tout his new Fox Business show which debuted that evening.

During the show a clip was played of an interview in which Harris criticised the lack of vaccine rollout plans from Kudlow’s colleagues in the Trump administration.

“We were leaving it to the states or local leaders to try and figure it out, and so in many ways we’re starting from scratch on something that’s been raging for almost an entire year,” Harris said in the interview with Axios.

While the clip played, Kudlow, who was not longer on screen but whose mic had not been switched off, could be heard repeating “bulls—! bulls—! bulls—!”

His response starts around 45 seconds into this clip:

As producers moved to cut off Kudlow’s audio-feed, the hosts apologized, with host Sandra Smith remarking: “That is Larry Kudlow weighing in… Wow.”

In his first Fox Business show later Kudlow apologised for swearing, but doubled down on his rejection of Harris’ criticism.

“I’m not usually a guy who swears but what the Vice President said burned me up and it’s simply not true, okay? It is somewhere between cognitive dissonance and an outright falsehood lie,” he said.

Kudlow was a member of the Trump administration’s coronavirus task force, and repeatedly downplayed the importance of the pandemic during his time in office.

Early last year he falsely claimed the virus had been “contained” before it went on to ravage the US throughout 2020. He was also a part of the administration’s Operation Warp Speed vaccine rollout plan.

The plan achieved its objective of helping develop COVID-19 vaccines, but by the time Biden took office in January its distribution strategy had become mired in chaos.