‘Everything is on the line’ during Georgia Senate runoffs: Sen. Loeffler

Sen. Kelly Loeffler, R-Ga., says a Republican-controlled Senate would be a ‘firewall against socialism.’

A debate between Georgia Sen. Kelly Loeffler and Democratic challenger Raphael Warnock is on for Dec. 6 after the Atlanta Press Club (APC) confirmed Tuesday that both campaigns are committed to the event.

The debate is scheduled for 7 p.m. and will air on Georgia Public Broadcasting. Warnock has challenged Loeffler, R-Ga., to three debates after the candidates mutually canceled one ahead of the general election. The Loeffler campaign had expressed interest in a debate facilitated by the APC during the runoff, after she and Warnock participated in a virtual debate run by the APC in October.

As of Monday the Loeffler campaign and the APC were still negotiating over the logistics but by Tuesday the issues were worked out and the debate was confirmed.

"Sen. Loeffler looks forward to exposing Warnock as the most radically liberal candidate anywhere in the country and hear why he has attacked our police, military, small businesses, Israel and virtually every single voting bloc in the state of Georgia," Stephen Lawson, Loeffler campaign communications director, said in a statement to Fox News.

"I hear you're ready to debate, @Kloeffler," Warnock said in a tweet. "Assume that means I'll see you December 6th at the Atlanta Press Club, and twice more so Georgians know who will work for them."

It is unclear whether Loeffler will debate Warnock at any other time besides the APC forum.

The same day as the Loeffler-Warnock debate, the APC has an event scheduled with Sen. David Perdue, R-Ga., and Democratic challenger Jon Ossoff, though Perdue's campaign has said he will not participate.

"The runoff in Georgia is an extension of the Nov. 3 general election, where 52% of Georgians voted against Jon Ossoff and his radical agenda. Perdue had a commanding first place win, outpacing Ossoff by over 85,000 votes – in nearly every other state, Perdue would have been reelected already," Perdue communications director John Burke said in a statement about the debates.

"We’ve already had two debates in this election," Burke continued. "In each, Ossoff lied repeatedly, and of course the media failed to hold him accountable. He refused to talk about the issues and could not defend his radical socialist agenda."

"I just learned about a half hour ago that he is refusing to show up for the Atlanta Press Club debate," Ossoff said of Perdue in a video of a campaign rally posted on his Twitter account Monday. "If David Perdue doesn't want to answer questions in public and debate his opponent that's fine. He just shouldn't run for reelection to the U.S. Senate."

If Perdue does not show up to the Dec. 6 debate, the APC has said it will still hold the event with Ossoff, leaving an empty podium to represent the incumbent. An APC spokesperson told Fox News that "we don't feel it's fair to penalize the candidate who has agreed to come."

The debates will come less than one month before the two elections that will decide the balance of power in the U.S. Senate.

Republicans after the Nov. 3 elections hold 50 Senate seats to Democrats' 48, counting the two independents who caucus with the Democrats. 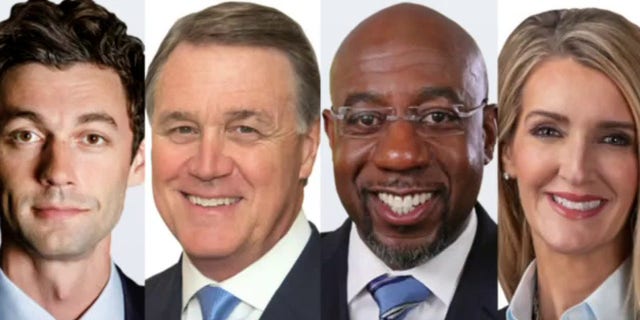 If either Loeffler or Perdue wins reelection, Republicans will hold at least 51 Senate seats in the next Congress and hold a significant check on much of President-elect Joe Biden's agenda.

But if Democrats manage to sweep the races, Ossoff and Warnock will bring the Senate to an effective 50-50 tie, giving Vice President-elect Kamala Harris the ability to cast tie-breaking votes when issues fall along party lines.

Sen. Joe Manchin, D-W.V., has been adamant in recent weeks that he will not go along with the agenda of some far-left Democratic senators, including packing the Supreme Court and getting rid of the legislative filibuster in the Senate. That effectively takes those issues, which were major points of contention during the presidential election and the Nov. 3 Senate races, off the table.

But Senate control will still play a major role in what parts of his agenda Biden can get through, including rolling back the 2017 tax cuts and adding a public health insurance option to the Affordable Care Act, as well as his appointments to both the judiciary and his administration.

The stakes have led big names from both parties to campaign in Georgia and could make the next two months some of the most expensive weeks of non-presidential politics in American history. Vice President Mike Pence is set to campaign in Georgia for Loeffler and Perdue on Friday in the most high-profile event of the runoffs yet.