Boris Johnson’s Chancellor Rishi Sunak is under pressure to axe the £15billion a year spend in the upcoming Budget to help fund the UK’s huge coronavirus crisis bill. The former Labour premier, who served as Prime Minister 13 years ago, has teamed up with David Cameron to warn the Tory leader the move would undermine his presidency of the G7.

Mr Blair said foreign aid – and the 0.7 target – had been a “great British soft power achievement”, saving millions of lives in Africa by reducing deaths from malaria and HIV, and cutting it would be a “profound strategic mistake”.

The UK has a legal commitment to spend 0.7 percent of its economy’s GDP on foreign projects and some of the world’s richest countries, including China and India, have benefited from taxpayers’ money.

The money saved could also be used to fund Foreign Office and Ministry of Defence projects.

But Mr Blair told the Daily Telegraph: “Over the past 20 years, the British commitment to 0.7 per cent has helped cut deaths from malaria, HIV and others on the continent of Africa, measured literally in millions; raised life expectancy dramatically; educated better many millions more children; created stability and assisted development which has seen investment and living standards rise to levels not experienced before. 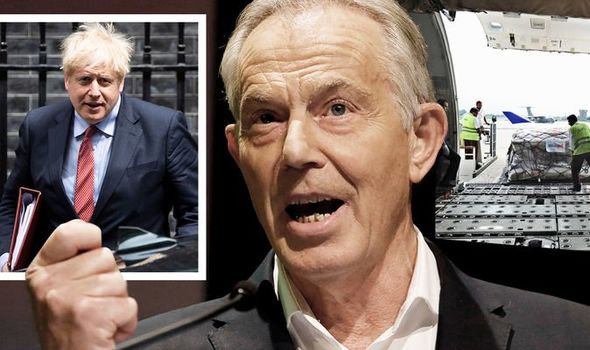 “This has been a great British soft power achievement. It’s enlightened self-interest.

“Neither the challenge of climate or COVID-19 can be met without Africa. Nor can those of extremism and uncontrolled immigration. To change it is a profound strategic mistake.”

Chancellor Sunak is widely expected to pare back the UK’s commitment to spend 0.7 percent of national income on overseas aid to 0.5 percent in next week’s spending review.

Mr Cameron oversaw the country meeting the 0.7 percent target for the first time in 2013, and he and Tony Blair have joined a list of those urging a rethink of the plans.

The spending on aid is related to gross national income which, in 2019, was £2.17 trillion, meaning a drop from 0.7 percent to 0.5 percent would account for more than £4 billion.

Mr Cameron said: “Abandoning the 0.7 target for aid would be a moral, strategic and political mistake.

“Moral, because we should be keeping our promises to the world’s poorest. A strategic error, because we would be signalling retreat from one of the UK’s vital acts of global leadership.

“And a political mistake because the UK is about to chair the G7 and important climate change negotiations. I hope the PM will stick to his clear manifesto promise, maintain UK leadership and save lives.”

Last week, the Prime Minister’s official spokesman drew attention to the fact that the legislation enshrining the 0.7 percent target in UK law might not always be met.

Meanwhile, coronavirus has led to a strain on the public purse with the Government spending billions keeping the economy ticking over.

Earlier this week, Mr Johnson was urged to rethink the plan in a letter signed by 185 development and humanitarian charity leaders including Save The Children, Greenpeace UK, and Unicef UK.

The former prime minister’s added in a joint statement: ”Now is not the time to renege on our promise to spend 0.7% of our gross national income on aid and development.”

“Stepping back from our international commitments is not the solution and risks damaging the UK’s standing globally as we define our role in the world post-Brexit.

“A U-turn on your manifesto commitment to maintain the 0.7 percent target would signal we are a nation willing to balance its books on the backs of the world’s most marginalised people, many of whom are dealing with the impact of COVID-19 on top of existing hardship.”