Michigan Gov. Gretchen Whitmer drew a strong line between an alleged plot to kidnap her and the rhetoric of President Donald Trump, whose recent comments have been interpreted by right-wing militia groups as encouragement.

“Just last week, the president of the United States stood before the American people and refused to condemn white supremacists and hate groups,” Whitmer, a Democrat, said at a press conference Thursday afternoon.

Six men involved with a militia group called Wolverine Watchmen are facing federal charges of conspiracy to commit kidnapping, and an additional seven people are facing state charges in connection with the alleged scheme. The men wanted to “storm” the state Capitol in Lansing with 200 men to take hostages including the governor, court documents say.

Whitmer said Thursday that the suspects aimed to “possibly kill” her.

Trump failed to speak out against hate groups during his first presidential debate with Democratic contender Joe Biden last Tuesday. Pressed to condemn the Proud Boys, a group of violent right-wing extremists, Trump replied: “Proud boys, stand back and stand by.” Members of the Proud Boys quickly turned the president’s words into a T-shirt and other merchandise. 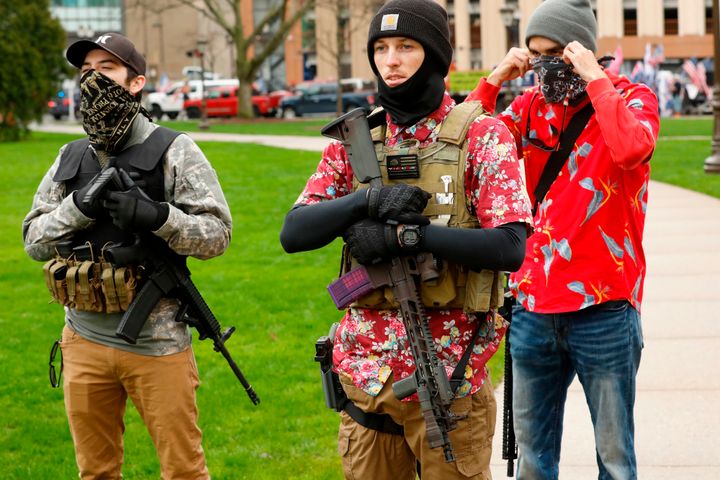 Trump also deflected criticism at the debate by claiming ― against the analysis of his own top law enforcement officials ― that the problem comes mainly “from the left wing, not the right wing.” The FBI warned as recently as two weeks ago that right-wing militia groups pose a “violent extremist threat,” particularly as the election approaches.

“Hate groups heard the president’s words not as a rebuke, but as a rallying cry — as a call to action,” Whitmer said.

White House press secretary Kayleigh McEnany responded to Whitmer in a statement claiming that Trump “has continually condemned white supremacists and all forms of hate,” and that the Michigan governor was “sowing division.”

Trump has danced around hate groups that profess to support him throughout his presidency; it took him two days after the debate to say the words “I condemn all white supremacists,” which he eventually did on Sean Hannity’s Fox News program.

Whitmer had been attacked by the president at the start of the coronavirus crisis for issuing strict lockdown orders that are credited with preventing statewide outbreaks. In April, Trump reacted to news of Michigan lockdowns by tweeting, “LIBERATE MICHIGAN.” Heavily armed Michiganders began showing up in Lansing around that time to intimidate lawmakers and demand an end to lockdown measures.

When asked by reporters whether he thought Trump’s tweet had influenced militias like Wolverine Watchmen, Biden responded Thursday afternoon, “Yes, I do.”

One of the men charged with plotting against Whitmer, Adam Fox, called her a “tyrant bitch” in a private Facebook group, according to the FBI.

Whitmer called the decisions she has had to make in the pandemic “gut-wrenching,” adding that “2020 has been a hard year for all of us.”

“It’s been hard for the teachers, students and parents. Hard for those who have had to stay isolated to stay safe. But here’s what I know. We are Michiganders. We have grit. We have heart. And we are tough as hell,” she said.